What Happened at Epicenter Festival? 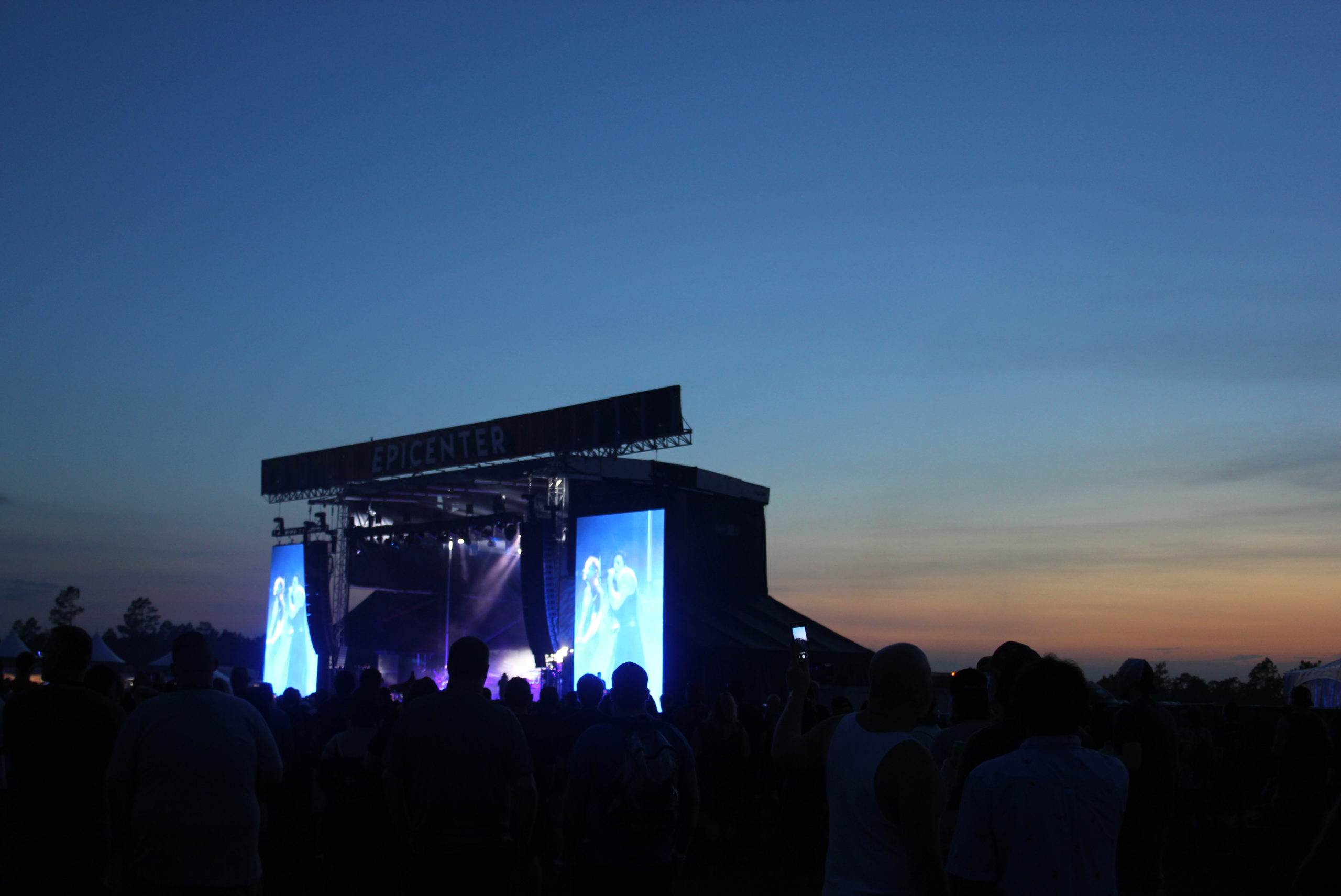 I had just picked up my media credentials for the inaugural Epicenter Festival and was looking forward to an evening of hard rock featuring Korn and Rob Zombie. But first all I needed to do was drive over to the entrance of Rockingham Speedway and park at the campsite where I would be staying for the weekend. Simple, right? Wrong.

I was directed to drive to a secluded road a ways away from where I had picked up my ticket, and when I got to the wooded, winding road, I was stopped behind what appeared to be a good number of vehicles. The Rockingham Speedway was nowhere in sight.

I thought that this would probably be a short wait and I’d be on the grounds in no time. Then my charging system light went on in my car. Was there something wrong with my battery? Against my better judgment, and the alarm bells warning me I should turn off my car and see what was the matter under the hood, I kept sitting in the traffic.

Two hours. I sat in barely moving traffic for two hours because, as I would soon find out, there was only one entrance to the festival of which Danny Wimmer Presents (the organizers of Epicenter) claimed there would be 90,000 people attending. One entrance.

It took even longer once I got on the Speedway grounds because each car had to be searched as if we were entering the U.S. from Canada. I had a very surly old lady get upset with me about my microphone, asking me incredulously, “What is this?” and holding the mic as if it was about to go off. I explained what it was and that I was media and I needed it for interviews. She then proceeded to ask me why I would need a microphone if I’m media.

“Don’t you just have to take some photos or something?” she snapped. I stared at her. She glared at me and then set the microphone back down.

The campsite ended up being well over a mile walk from the entrance, with only about 20 port-a-potties for thousands of campers. Yes, these became disgusting very fast (also, showers were available but cost 10 bucks a pop and, according to a few people, were cold and barely had any water pressure).

The website had touted food and necessities that would be close to the campsite, which ended up being mostly true—but only for the VIP campers. The rest of us poor souls had to walk over a mile across a muddy field, an old dilapidated racetrack, and around the Speedway just to get food or water.

After the entrance fiasco, the Friday evening portion of the festival seemingly went off without a hitch. That is, until Korn played their last chord and it was time for the tens of thousands of people to leave. I was camping, along with thousands of others, so thankfully we had no idea at the time about the ruckus that was going on a half mile away as people tried to leave the grounds.

According to many complaints on Epicenter’s Instagram and Facebook pages, attendees were stuck in standstill traffic for over three hours, and it wasn’t until someone cut a hole in one of the fences that cars were actually able to start moving. No one knew why everyone was stuck or if anyone was even directing traffic, and there was no explanation from Epicenter as to what happened.

The next morning I woke up and looked at the weather for the day: 100 percent chance of strong storms. I turned on my car—which whined quite distressingly—and saw that the charging system light was still on. I realized that I didn’t want to press my luck any further and decided to peace out, especially since it was entirely possible the day’s festivities would be canceled.

I headed out, and within twenty minutes my car just sputtered and died on the side of the highway. Alternators are a S.O.B.

I am also fairly upset with myself as I was fully planning on doing the whole Epicenter weekend from start to finish just so I could see what a three-day music festival was like. Alas, I failed so miserably.

Back to Epicenter. The festival opened at noon, and the day didn’t get too far before they evacuated the venue due to severe weather. Within an hour, Epicenter posted more updates with one telling patrons to stay in their cars and not attempt to go anywhere. Which, of course, caused the crap to hit the fan. 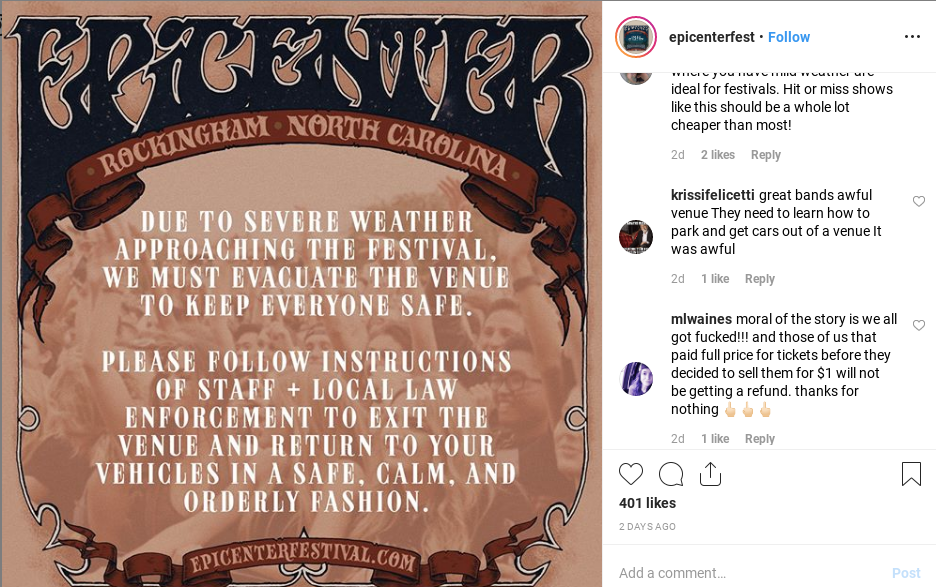 If you want a laugh, go read the comments on the Epicenter posts of people threatening to sue, comparing Epicenter to Fyre Festival, and being furious that they weren’t allowed to drive away.

Then it got worse. Within another hour, Epicenter announced that the festival would not reopen that day and for everyone to stay sheltered in their vehicles. Apparently some of the stages and grounds had been wrecked by the storm. Well, this made people even more mad because many had driven a long way to see Tool perform that night (one person said they had come from 12 hours away). Justifiably, they were all upset that they lost money and they couldn’t see Tool or Judas Priest perform. But it was hilarious to see people all but accuse Danny Wimmer Presents of controlling the weather and making a severe storm happen. Boy, am I glad I left when I did. 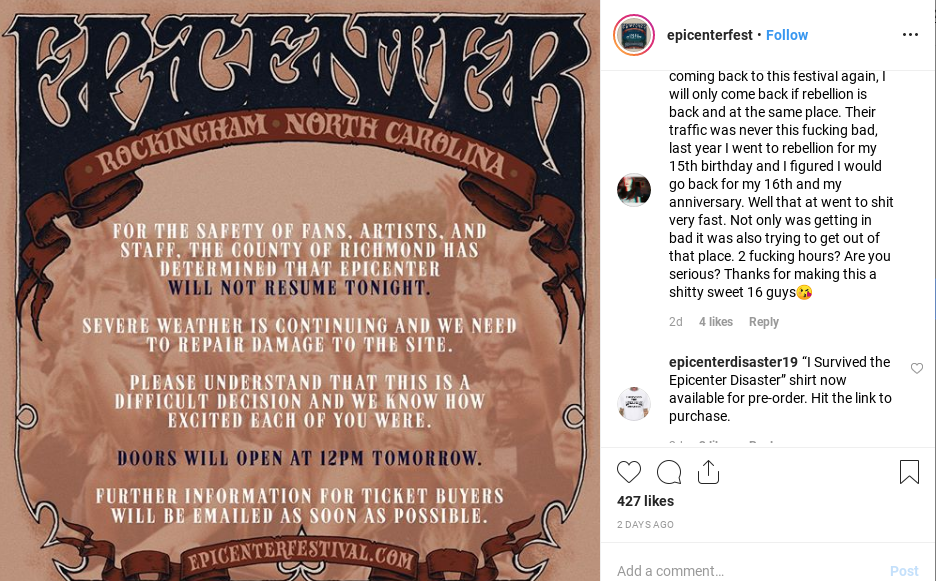 The next day, it was unsure as to whether the festival would reopen, but thankfully (for Danny Wimmer Presents’ sake) they decided to open it at noon. The rest of the day and evening looked like it went off well, and people seemed very pleased with the Foo Fighters closing the festival.

It will be so interesting to see what happens next year or how Epicenter will respond to the parking and entrance disaster and the thousands of complaints they must be getting (for more, check out this Alternative Press article). Another issue people seemed to have was that Epicenter started selling tickets for a dollar after many people had already paid hundreds of dollars for their tickets.

I was willing to give Epicenter the benefit of the doubt and say to you now to give them another chance and that they will definitely try to improve next year. But then I just received an email survey from Epicenter asking for feedback and how they can improve. I was very impressed they genuinely wanted to improve so I took the survey.

What a joke. There was one question asking “What is ONE way we can improve for 2020,” and one section asking me to rate various aspects of the festival. The rest of the five pages of “survey” asked me such questions as “What apps do you regularly check on your mobile device,” “How likely are you to buy an automobile next year,” Which of the following sources do you plan to use when researching your next automobile purchase,” and my favorite question “Do you have a credit card with any of the following banks?”

This was another blatant grab at money on their part and not only did they really screw up portions of the festival weekend but now they’re selling our survey answers to third parties.

So that’s the story of what happened on this tumultuous weekend of the very first Epicenter Festival. Maybe next time Epicenter will figure out a better way to get everyone in and out, not sell one dollar tickets, genuinely want to improve for 2020, and maybe educate their “security” on what a microphone is. 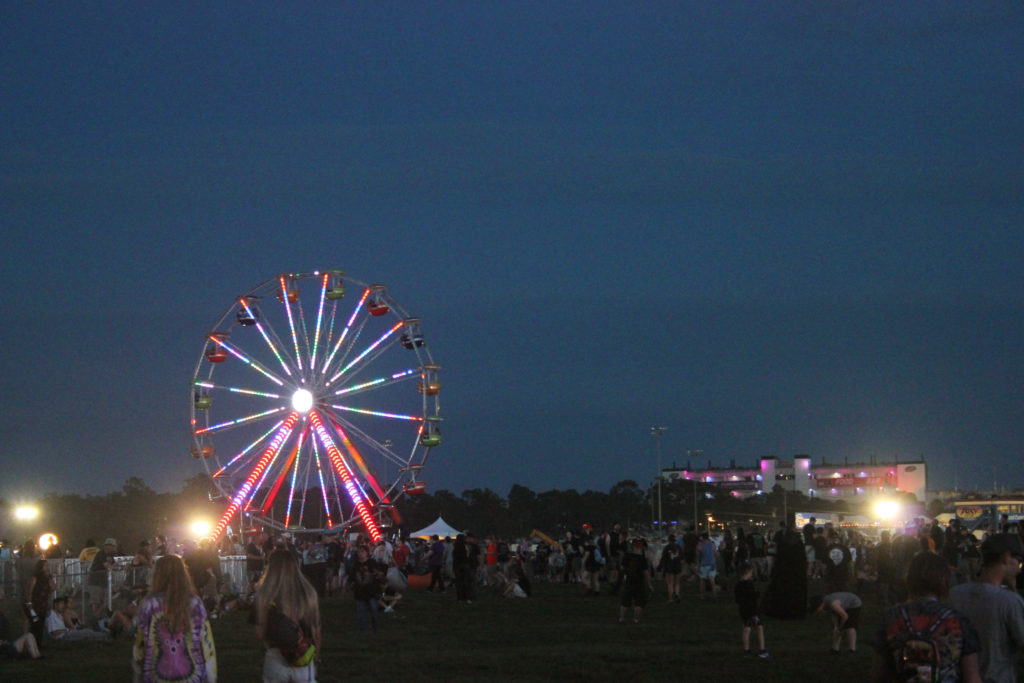 My original plan, before all this hoopla, was to do a post featuring my various observations from the weekend and what it was like to attend. That really got kicked to the curb of course, but I still managed to cull together 16 observations from Friday evening.