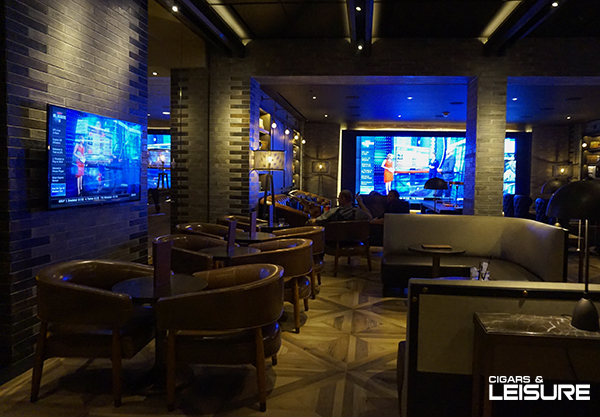 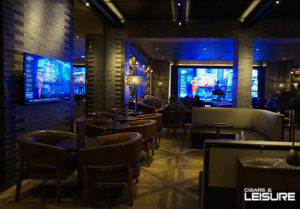 “Wow.” That’s the typical reaction of anyone who walks into Caesars Palace’s latest haven for cigar enthusiasts, the Montecristo Cigar Bar. Like the majority of Caesars Palace, no expense was spared in making this not only one of the best lounges in Vegas but perhaps one of the best in the country. Designed by the award-winning Rockwell Group, this 4,000-square-foot space is luxurious, posh, and inviting, sure to make even the nonsmoker’s head turn.

Upon entering the bar, you step into the lounge area, designed to look and feel like someone’s living room. There’s a line of small tables and seats for those wanting to enjoy a cigar and cocktail or beer away from the bar. The far wall is taken up by a huge television screen, making Montecristo Cigar Bar a major destination during big sporting event viewings. There’s also an actual bar that serves as the centerpiece of the venue, running from the front of the establishment to the back of the courtyard area. According to Chelsea Ryder, Caesars Entertainment’s public relations manager, the bar has approximately 135 different bourbons and whiskeys that will pair well with the bar’s premium cigar offerings.

For those wanting to hold a special event or small meeting in the bar, the Montecristo Cigar Bar’s Vault Room is the perfect option. Several popular cigar brands featured in the bar’s humidor are etched into the walls of the Vault Room. Perhaps the most spectacular area of the bar is the courtyard, which gives you an entirely different vibe and feel from what the rest of the bar does. With greenery and lighting meant to mimic different times of the day, this is a great space for those who want to feel like they’re enjoying their favorite cigar outside, minus the Vegas heat. 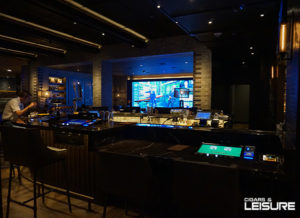 If you don’t have your own cigar, no worries. Montecristo Cigar Bar’s humidor is stocked full of favorites, including Montecristo, Romeo y Julieta, Ashton, Padrón, Macanudo, Rocky Patel, and many others. Touted as one of the largest humidors in Vegas, this is one of the only places where you can find Montecristo’s Las Vegas Edition cigar, a 6 x 54 full-strength Dominican cigar with a Mexican wrapper. There are also plans to add personal lockers to the humidor, making it even more of a second home to frequent visitors.

The Montecristo Cigar Bar typically becomes crowded after 4 p.m., but that shouldn’t stop you from coming into one of the hottest, swankiest new cigar destinations in Vegas. The Montecristo Cigar Bar is located across from the popular Nobu restaurant and lounge in Caesars Palace and is open from 10 a.m. to 12 a.m. Monday through Thursday and from 10 a.m. to 2 a.m. Friday through Sunday.

Here’s another great lounge to check out in Vegas. Do you need to cool off? Check out our 4 favorite Vegas pools.

Where to Smoke in Vegas: Davidoff Cigar Bar

Where to Smoke in Vegas: Casa Fuente