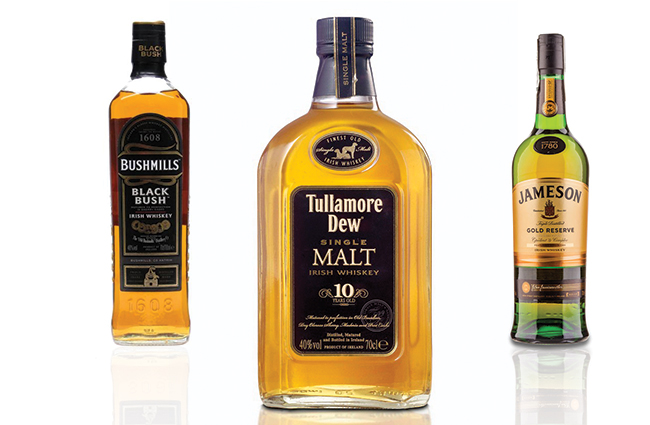 St. Patrick’s Day is definitely worth celebrating, but if you’ve outgrown green beer and throwing a shot of Baileys into a pint of Guinness (to the detriment of all), here are three ideas of which whiskey you can sip instead. And if you want something a little lighter than whiskey neat or whiskey on the rocks, try mixing with ginger beer (the authentic, mouth-is-on-fire, spicy stuff!).

After distillation, this whiskey is aged for 10 years in casks that previously held bourbon, oloroso sherry, port and madeira. The combination of flavors gives it a sophisticated and enticing tropical fruit taste, along with the woodsiness and spice you generally expect from whiskey. This whiskey has tons of personality, especially for a Single Malt.

This whiskey is aged up to seven years in bourbon and oloroso sherry barrels, and their influence is immediately visible when you pour (it’s pretty dark!). It’s a blend, not a single malt, so the spicy flavors are a bit fuller. It’s pleasantly sweet, too, so it’s very easy to drink. Delicious on the rocks or even mixed with ginger beer.

Jameson master blender, Billy Leighton, personally selects all of the Grade A casks for aging this whiskey, including bourbon, sherry and even virgin oak. He then carefully monitors the aging process and is constantly tasting everything before deciding the perfect moment for the final blend. That’s a lot of time and energy, and this smooth, creamy, sweet and peppery whiskey is proof that it was all worth it.

For more, check out whiskey barrel coffee, and some excellent after dinner drinks.