The Unwritten Rules of Pipemaking 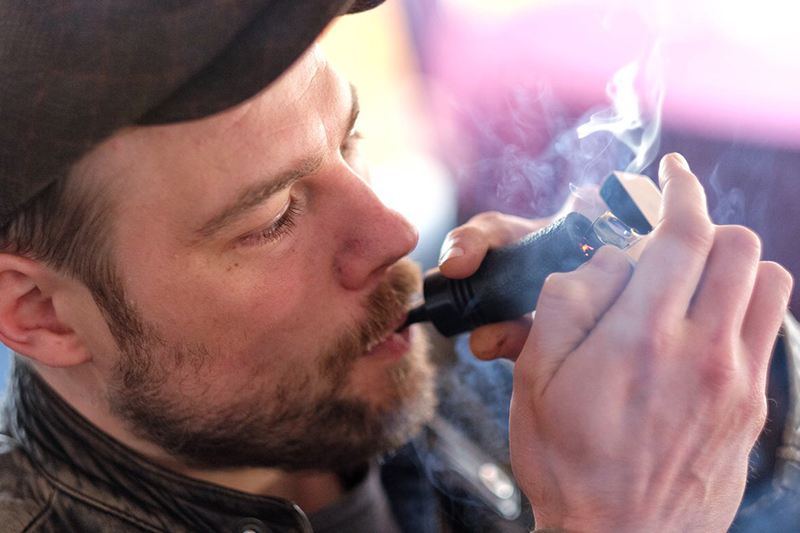 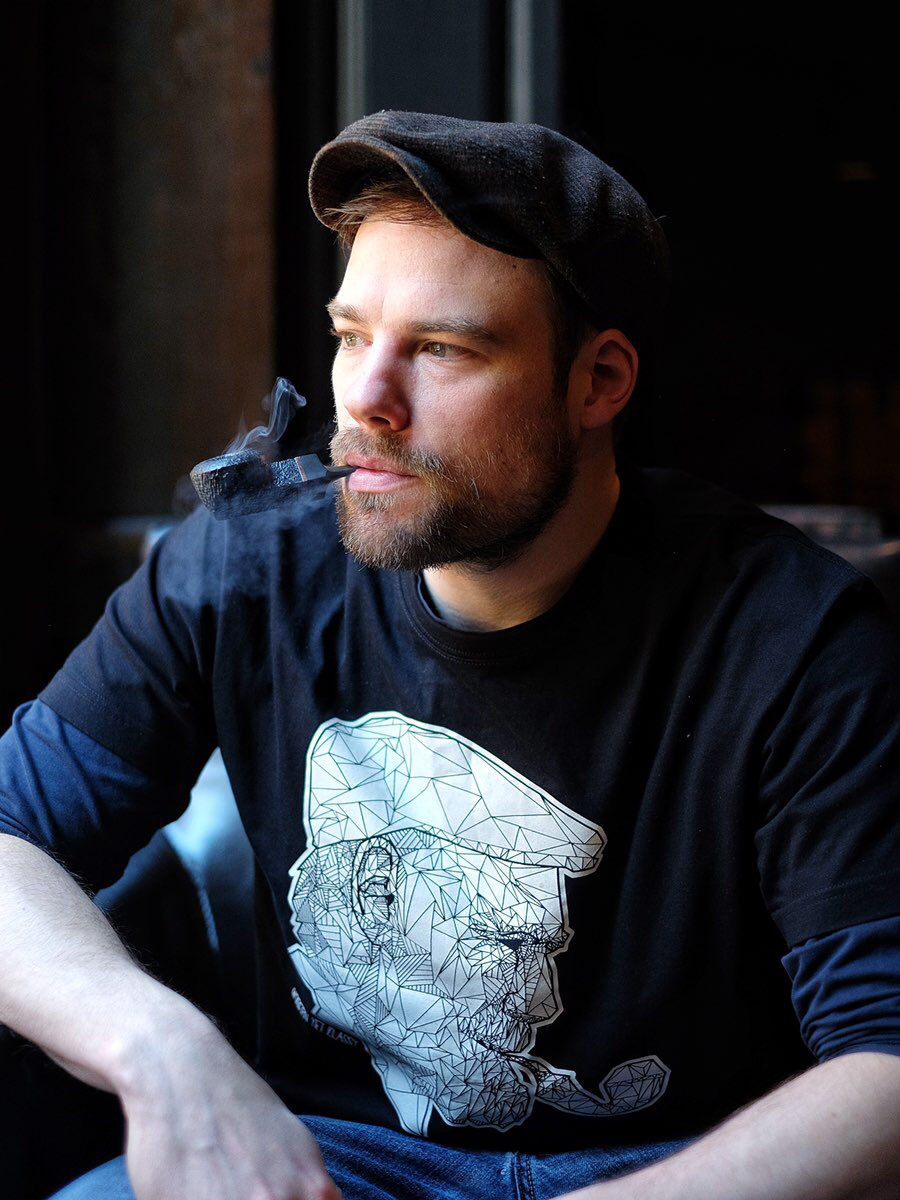 It’s a chilly 32 degrees Fahrenheit in early December as Dirk Heinemann walks the short distance from the bus stop to his great-great-grandfather’s farm northeast of Neustadt, Germany, a beautiful old-world town of 45,000 inhabitants in the Hannover district of Lower Saxony. The farm was built in 1888, although Heinemann’s family has been on the land since 1533. It’s almost 8 a.m., but the sun won’t be up for another 15 minutes.

Heinemann’s workshop is in one of the farm’s brick outbuildings and depends for heat mostly on a wood stove, which was banked down overnight. As the sun comes over the horizon, it reveals a lush, lightly frosted pasture. To those of us who spend our days in long commutes on eight lanes, it’s a bit of something out of a fairytale.

Heinemann’s first order of business is to make a strong cup of coffee and pack his pipe. He’s loading his current favorite, an Axel Glasner sandblast bulldog, with Samuel Gawith’s Commonwealth. After lighting up, he flips through vinyl LPs stacked in front of his turntable to set the morning mood. In such surroundings, you might be excused for thinking he’s going to pull out a late quartet by Beethoven or Bach’s Art of Fugue, but what we see instead are Leonard Cohen jackets (his favorite), which he flips past to jump-start the day with a blues tune from Jack White’s 2014 sensation Lazaretto.

Like the eclectic tunesmith White, Heinemann has cultivated a gift for recasting classical elements into strikingly modern contexts—not surprising, since he is a product designer, joiner and professional furniture maker.

Today, he’s working on pipes, and he begins with light work that doesn’t require safety equipment. First some bowl coating on a Dubskimo, then contrast dying an Architect in his favorite black and orange combination. These are two of his signature shapes. The first, with its white Juma stem and partial blast, looks like an Inuit souvenir picked up at last year’s Iditarod on one of Heinemann’s many travels. He’s been through most of Western Europe, China, Bali, Portugal and the U.S., and he has plans for visiting Scotland, the Lofoten Islands of Norway and Canada. But wherever he is, he keeps an eye out not for pipe shapes but for interesting lines and details.

The Architect, one of his most strikingly original designs, looks like it jumped off the screen of Incredibles 2, but it was actually inspired by a day in the library spent poring over architecture books about mid-century modernists Oscar Niemeyer and Zaha Hadid (who, coincidentally, also inspired the look of the Disney film).

Heinemann also finds ideas, he confesses, quite by accident. “A shape will intrigue me, maybe a detail on a door handle in the subway or an interestingly shaped wine glass.” One of his unwritten rules: Sometimes the idea finds the maker and not the other way around. 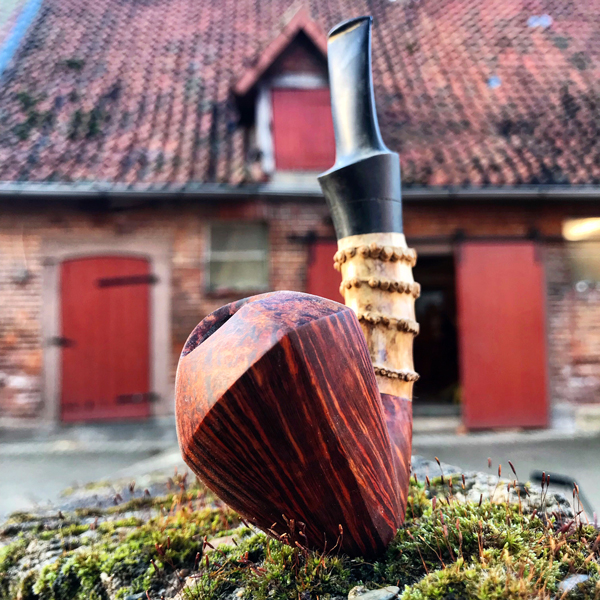 Heinemann is quick to point out the carvers who inspire his style: the Ivarssons, Jeff Gracik, Axel Glasner and Chris Asteriou. Another big influence is the visionary Christian Wolfsteiner, who passed away in 2016. “Not so much in style but in attitude: He taught me to constantly question the unwritten rules of pipemaking.” Heinemann’s shapes spring forth with his own smoking in mind, and aside from the Architect are usually easy-to-clench pipes with small- to medium-sized bowls and chambers, sometimes with a riff from another carver or past master he’s made his own.

Coffee, pipe and light work done, Heinemann turns to the main business of the day: shaping, drilling and sanding. He usually works on four pipes at a time until only minor work needs to be done then begins another four. About mid-morning he’ll stop for a mug of Lapsang souchong tea, another smoke and maybe a short conversation with Orla, one of two German Wirehaired Terriers in residence at the farm.
Shaping. When developing a new idea, Heinemann first draws sketches from different angles to get an idea of how transitions, stem lengths and bowl height might work. If he hasn’t seen a shape as a pipe firsthand, he may shape it out of a hard foam that architects use for scale models.

Cutting. When the idea finally gels, he’ll pick up a few blocks of wood (he uses plateau briar sourced from cutters in Italy, Spain and Greece) to see how he can merge sketch and the grain of the wood. Once sketched, he cuts the block at the band saw then does rough shaping on the disc sander and belt sander, trying to remove any sandpits and spots in the process.

Bowl Drilling. With the shape roughed out, Heinemann draws the lines for the draft hole, chamber and tenon hole then drills the pipe on the lathe, using spoon bits for the chamber made by his friend Cody Perkins of True North Briars. The draft hole in the stummel is drilled at 4 mm, which Heinemann believes is small enough to prevent pieces of tobacco from getting stuck in it but still large enough to provide an easy draw.

Mouthpiece. The draft hole in the mouthpiece begins with 4 mm at the mortise then transitions to 1.5 mm at the button. Sometimes Heinemann uses pre-made 7 mm Delrin tenons and sometimes he turns the tenons directly out of the stem material on the lathe. Personal preference enters into his compositions. “I find mouthpieces which are 3.8 to 4 mm the most comfortable,” he says. “If they’re thicker, clenching becomes uncomfortable, and if they’re thinner, there’s too much possibility of biting through the air hole.”

Like most German pipemakers, Heinemann prefers vulcanite for his mouthpieces. He explains, “Guys who carve structures into the stem often prefer acrylic because you can’t do that with vulcanite.”
Unwritten rule: “For me, a pipe is made to use and not just look at, and I think vulcanite is much more comfortable than acrylic, even if it is susceptible to bite marks.”

Tenon Accent. If there’s going to be an accent—and there often is—Heinemann will turn it at this point. It doesn’t have to be exotic to be exquisite. One of his most recent materials was given to him by his father from a lilac bush, a hardwood not commercially harvested though often used for musical instruments and carving.

Finishing. After the tenon, Heinemann turns to the finishing, which involves sanding, reshaping if new pits occur, staining, more sanding and the final hard oil finish. This last step is applied in seven to 10 coats over as many days and is followed by a light buffing and the application of a little carnauba wax. Each pipe is then stamped with “HP” for Heinemann Pipes in a circle over the number equaling his years as a carver—“8” being the current number. 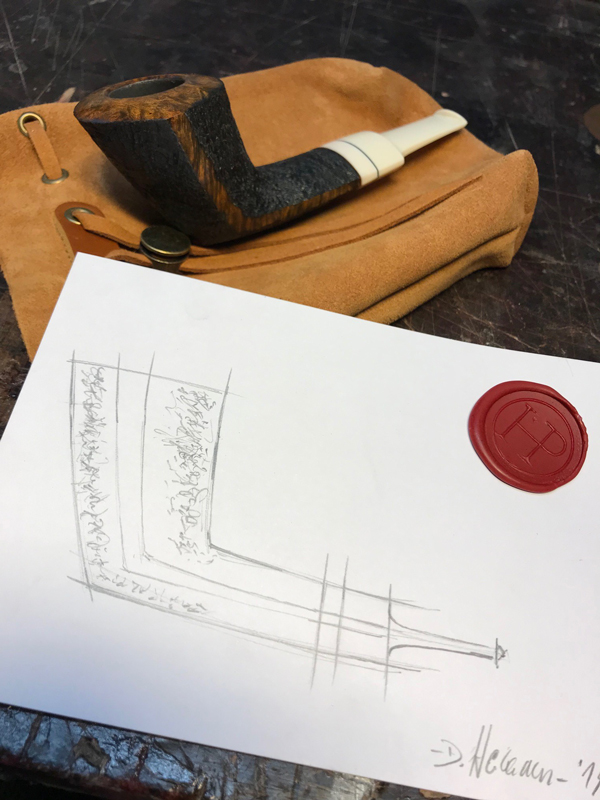 From there, Heinemann pencils a sketch of the pipe for its new owner on a card, places his wax seal in the corner and slides the new pipe into a leather sock. If the pipe is a commission, he’ll take a few snaps of it on his phone to send ahead to the client before it’s mailed.

Following a lunch break, Heinemann returns to the workshop. He will work until 7 p.m. or so, well past sundown, which today comes around 5:30 p.m.

Heinemann came to pipe smoking through his woodworking, becoming a pipe smoker after carving his first pipe in 2007. When he started out, German artisans had recently launched an online forum to share pipemaking knowledge and encourage one another to push beyond current horizons. He made three or four pipes a year after that, studying the work of masters like Bo Nordh and Cornelius Mänz (who, like Heinemann, is a product designer) and connecting with other German pipemakers online, in person or at pipe shows. The pipemaking community in Germany, as here in the United States, is primarily about collegiality, not competition. In 2011, Heinemann launched his career as a self-employed furniture designer and with it, pipemaking.

Out of the dialogue, study and craftsmanship, Heinemann says he has evolved a three-tiered philosophy of pipemaking:

“At a minimum, the pipe should be well-made. The drilling should be precise, the stem and button work clean. The draft hole should be neither too big nor too small. Attention to these details should produce a good smoker. It’s quite possible to purchase a factory pipe with these qualities for not much more than $50.

“But if you take it up a notch and ask what makes a good handmade pipe, the list would have to include four additional factors: 1. Good shaping—proportions, lines and precision—is the foundation of a great handmade; 2. optimum grain and grain placement; 3. the visual and tactile qualities of top-notch stain work; and 4. premium finishing. 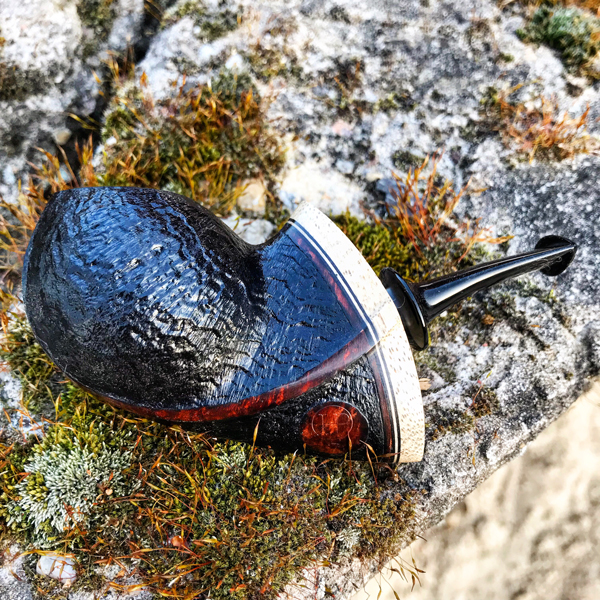 “For me, and maybe this is another of my unwritten rules, there’s one more, higher tier, and it’s just this: At the end of the day, the best pipe is the pipe you like smoking. It’s as simple as that. Maybe it’s a pipe associated with fond memories. Maybe you got to know the maker; maybe you purchased it at an important event or time in your life. Maybe it was a gift from a friend or your wife.

“I have a corncob Jim and Jack Deschaine gave me, whose table was next to mine at my first Chicagoland show last May. They gave it to me saying, “Welcome to America!” Even though I have another pipe which Jim made for me that I love, that $5 cob means a lot to me. To me, pipe smoking and collecting is about storing up good memories.”

Some pipemakers—Werner Mummert, J.T. Cooke, Konstanstin Shekita and Claudio Cavicchi come easily to mind—are instantly recognizable while other artisans seem to depend on shapes that are in vogue at any given time. Heinemann believes that beginners should learn from existing shapes then move on to see if they can bring their own style and ideas into the mix. “Apart from functionality, there isn’t any ‘correct’ way of how a pipe should look. The worst thing that can happen is that a pipemaker becomes fearful of trying something new.” 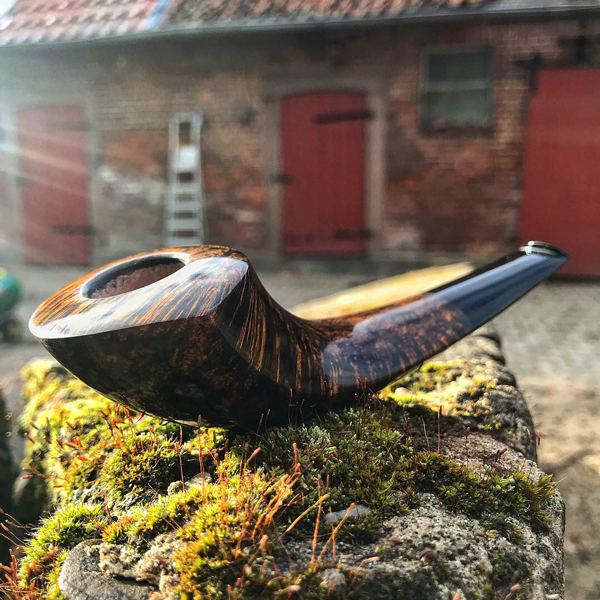 Concerning his own style, Heinemann is reluctant to comment. “I think it was in my second or third year of pipemaking that people began mentioning they could recognize a certain style in my pipes. I always try to give my shapes a certain flow or movement, maybe even tension. Sometimes I add a line or play with details, but I don’t want my shapes to look too complicated. I try to keep them simple. I really admire people like Abe Herbaugh who can play with lots of lines and curves, but I think I’m too simple-minded for that.”

At the end of the day, Heinemann confesses he’s happy if he got to stand in his workshop, design and get his hands dirty making something. If he’s headed back to his apartment, he’ll answer a few emails while he’s riding the bus home. Or he may hang out with his parents and brother for dinner at the farm. After dinner, a book at the fireplace or conversation with his wife, Jing Jing Qi, and maybe a Lagavulin 16 (neat) are all that are needed to make the perfect ending to a
perfect day.

– Story by Mark Irwin. Photos by Dirk Heinemann, except portraits of Heinemann by Andrew Parfenov.