Sour Beer: Weird, Charming and Taking Over the World 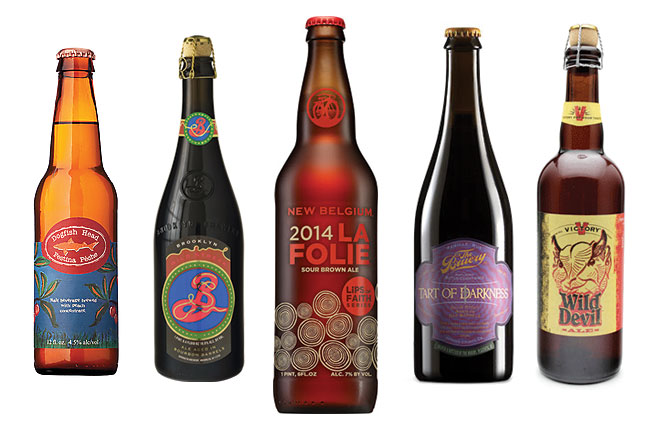 OK, so sour beers aren’t taking over the world, at least not yet, but this once obscure style is now garnering attention on the craft beer/foodie scene. Sour beer originated in Belgium, where brewers would allow wild yeasts to enter the beer while it was in barrels. This sometimes produces some funky flavors because the brewers can’t rely on a super sterile environment and the control that that offers, which is probably why most modern brewers (especially in the U.S.) left it to the naturals in Belgium and Germany. Although any beer can be “soured,” there are traditional styles and guidelines, any of which may make you pucker. Frequently brewed and bottled as limited releases and generally best in hot weather, a lot of sour ales are in 750 ml bottles, so grab a champagne flute, pilsner glass, snifter, or even a wine glass. Here are some to try:

Wicked Weed Genesis Blonde Sour
Website: wickedweedbrewing.com Twitter: @wickedweedbeer
The awesome people at Wicked Weed Brewery in Asheville, North Carolina are bringing sour back. They have a few varieties, and this one is brewed with papaya, mango, pineapple and guava, and aged in wine barrels for eight months. All of that tropical sweetness contrasts nicely with the tartness provided by the wine’s influence and the lactic fermentation.

The Bruery Heart of Tartness
Website: thebruery.com Twitter: @thebruery
The Bruery, in Placentia, Orange County, California, makes a sour stout (yeah, read that again), this beer packs a lot of flavor, including notes of coffee, plums, vanilla and oak. The Bruery uses a combination of wild yeasts and special bacteria to get your mouth freaking out by all the taste sensations.

Dogfish Head Brewery Festina Peche
Website: dogfish.com Twitter: @dogfishbeer
Festina Peche is a Berliner Weisse-style sour beer, with peach added to counter the sourness. The peach doesn’t make it sweet, though it does lend it a lovely and delicate aroma. This pale brew is perfect for starting a meal on the deck or patio, and the fun people at Dogfish Head, in Lewes, Delaware, recommend a pint glass for this particular brew.

New Belgium La Folie
Website: newbelgium.com Twitter: @newbelgium
La Folie is a sour brown ale, and it’s a little bit higher in alcohol content than some of the lighter brews. The folks at New Belgium finish fermenting the beer and filter it before putting it into wooden barrels for three years. The result is a sour beginning and smooth finish, with flavors of late summer, early fall tart fruit.

Victory Brewing Company Wild Devil IPA
Website: victorybeer.com Twitter: @victorybeer
Traditionally, sour beers don’t have a ton of hops and therefore lack the bitterness that has been popular in the past few years. The Wild Devil IPA, out of Victory Brewing Company in Downingtown, Pennsylvania, has the bitterness from hops and sourness from a strain of wild yeast. This beer has the floral aroma typical of IPA, but the wild yeast’s influence adds some refreshing earthy funk (think pine and citrus, rather than the “barnyard” flavor sometimes associated with sour beer).

Brooklyn Brewery BQE Wild Streak
Website: brooklynbrewery.com Twitter: @brooklynbrewery
Wild Streak is a bit younger than some of its counterparts on this list, but it’s not lacking in character. This is a Belgian-style Golden Ale, aged in bourbon barrels and then bottled flat. Brooklyn Brewery then adds some yeast from Champagne grapes and a wild strain, and their reaction causes natural carbonation over time, directly in the bottles.

For more beers, check out these chocolate beers!