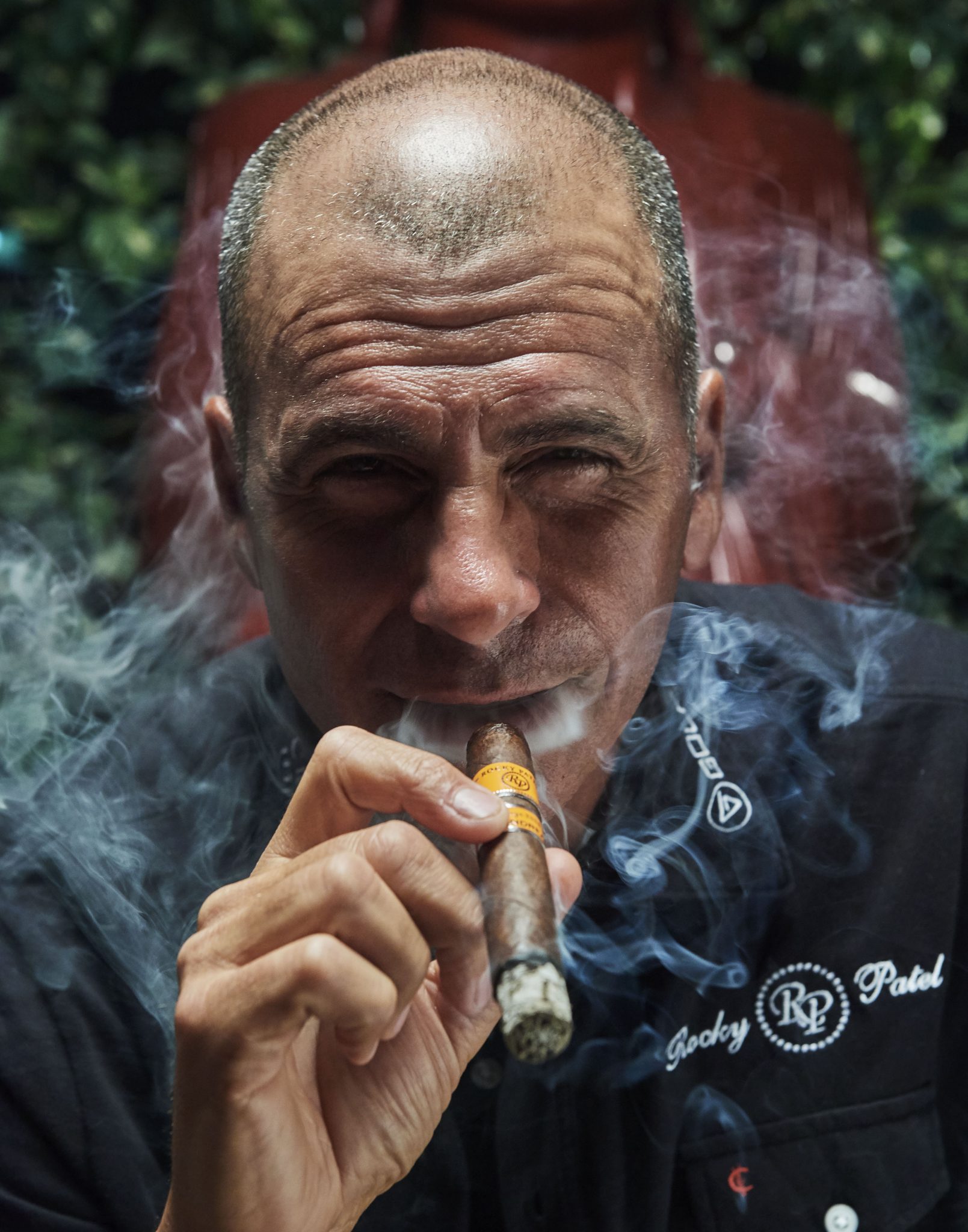 Recently, we were hanging around Apex Cigar Lounge in North Carolina with golf legend Rocco Mediate. Rocco, who is currently on the Champions Tour, is not only known for his work on the course where he’s won a dozen tournament titles, but also for being a fun-loving, no-nonsense guy who speaks his mind off it. Rocco saw a copy of Cigars & Leisure featuring Greta Van Fleet on the cover sitting on the table, and his eyes lit up. “Aww. Fucking love those guys,” he said. “I love music. I have 5,000 songs on my phone.

“Rush is my favorite band. I’ve been following them for 30 years now at least. I met [guitarist Alex Lifeson] in ’92. I was on my way to the U.S. Open and stopped on the way to see Rush in St. Louis. I called to see if they wanted to play golf in the morning. Alex came out, and we’ve been great friends ever since. I played [Greta Van Fleet] for Alex when we were up there in August, said, ‘You gotta hear this.’ He goes, ‘Yup. Just like us. Learned from Jimmy Page. These kids are unreal.’ He’d never heard them before. That’s huge. It’s one thing for me or you to think they’re great, and it doesn’t mean shit, but when a guy from a band like Rush thinks the kids are unreal, they’re unreal.”

After finishing up at a charity golf event, Rocco went and hung out with the local cigar enthusiasts as part of a deal he has to rep the Rocky Patel brand. Basically, he held court with an audience of 20 or so, sitting in a plush leather chair and delighting the group with his unfiltered musings about everything under the sun and an uncanny ability to recall minute details about dates, courses, and shots he hit over the last 30 years. First, he explained why he was there and his love for cigars.

“It’s been four years since Rocky and I started working together,” Rocco says. “We thought it would be good to do this 10 or 12 times a year when I’m in certain cities. And it works out really well. I like it. As you can see, I don’t mind talking. You get a rash of shit from everybody, and I give it back to them. Which is good.

“I guess I started smoking cigars like 10 or 12 years ago. Just a little here and there. Then when I learned about his stuff, I really liked it. Then my buddy knew [Rocky] and introduced us, so it worked out perfect. A lot of guys in the championship smoke cigars. It’s a perfect match. Rocky has taught me a lot about how they’re made. I had no idea what it took to make one of these things. It’s ridiculous how intricate it can get. And you can tell when it’s done right. It’s very cool. I was really surprised about the quality control and what a stickler he is. He rejects a lot of his cigars that are coming out. If they aren’t perfect, he tosses them out on the spot.”

Here are some of Rocco’s best answers (that we can print) to questions posed: 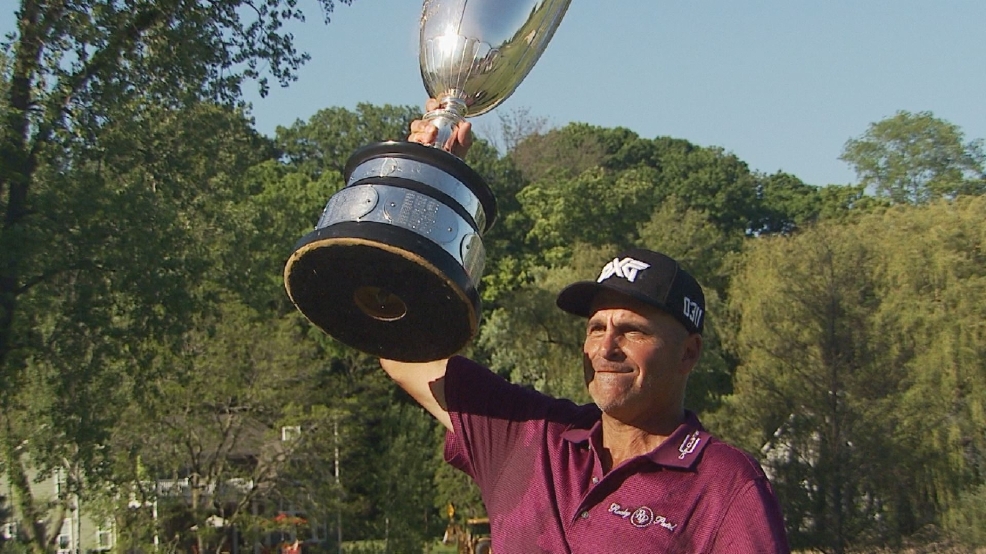 Cigars & Leisure: What do you like best about golf?
Rocco: No one’s helping you. There’s no one to blame but yourself. Guys in golf who blame their caddies or anyone else shouldn’t be allowed to play golf. And the course has nothing to do with it. The ball only goes where you directed it. If it is directed wrong, you have to pay the price.

What do you think about team golf, like the Ryder Cup?
It’s an exhibition. After a few days, when it’s all said and done, it’s all for nothing. Tournament golf is all that people care about. The Ryder Cup, during that week, is awesome. But who was the third match out of Saturday? No one knows. But I could tell you the last 40 or 50 U.S. Open winners, the runner-up, and the venue. That’s what matters.

What is your favorite course?
Riviera in Palisades [California]. Always has been. Course, designer, area … I love LA anyway. I’ve played good there, and I’ve played shitty there, but I just adore the place. I’ve played 24 or 25 LA Opens there.

What do you think about the criticism that U.S. Opens aren’t entertaining because they are too hard?
It depends on what your definition of entertainment is. I’ll clear up all the USGA’s bullshit you’ve been hearing about, about how it’s too hard. Five hundred years ago when golf was invented, let’s say Old Tom builds a 400-yard par 4. Par on that hole was very, very difficult to attain. When you saw the first British and U.S. Opens, they might be 20 or 30 over after two rounds. Back then, a 420-yard par 4, you couldn’t reach in two. Think about what I’m saying. The ball had feathers in it. Making par is basically unreal. There lies your major championship setup mentality. What the USGA has done the last 100-something years is try to preserve par. If you want to see birdies, watch the fucking Las Vegas tournament or watch Phoenix. But if you want to see low scores, don’t watch the U.S. Open because it’s not going to happen. Occasionally you’ll have an aberration, especially if the fairways are soaking wet. Shinnecock [in 2018] was a totally different course; it still had 45–50-yard-wide fairways. That isn’t the U.S. Open. U.S. Open fairways are supposed to be 23–26 yards wide. To make par hard to attain now, they have to do some stupid shit. Because these morons want to hit it 340 every time and then bitch and moan when they aren’t in the fairway.

How has new equipment changed the game?
Every sport that we can talk about, [the players] get bigger, they get faster, and they get stronger. Golf has become monsters. Tiger [Woods] could break me into three pieces even today at 42. Dustin Johnson? Monster. Break you into three pieces. Then you have guys who are the opposite. Rickie Fowler, Jordan Spieth, Justin Thomas. Little, skinny, but really strong guys. They do the same thing and the ball still goes far. They learned to move the club faster. Has equipment helped? Sure. But it hasn’t made them what they are.

If you go back to the old equipment, the persimmon drivers and whatever, the first Titleists, guess who’s still going to be the longest players? The guys who are longer now. They’re still going to be 20 or 30 yards longer than everybody else. So, it doesn’t matter.

Is it weird that guys like Duston Johnson and Brad Koepka who are in competition with each other are goofing around with each other on the course? We didn’t see Jack Nicholas and Arnold Palmer act like that.
DJ and Brad are buddies. We did the same thing. It just wasn’t on television every time we said anything. I love these kids today. I love them. I think golf is in a good spot. But, the [overall] whining … got to stop. This “live under par” bullshit the PGA Tour just came up with. Why isn’t it live around par? That’s how it used to be. There’s no respect. Recently somebody says, “All I do is play bomb and gouge. Bomb and gouge.” What the fuck does that mean? That’s not playing golf. He said it at Colonial [Country Club in Fort Worth, Texas]. Colonial is Hogan’s Alley. You don’t say that dumb shit at Colonial. “I’m going to drive wherever I want and gouge a wedge onto the green.” Great. How’d you play? “Well, I missed the cut. But I bombed and gouged.” Yeah, don’t try to hit that 28-yard-wide fairway. That would take talent.

Jack was great. Mr. Palmer was like my second father. I grew up four miles from where he was. He was a beauty. Still is. He’s still around golf, you just can’t see him. I learned more from Mr. Palmer about life than anybody else. He taught me how to be, not how to play. He yelled at me a lot because he expected me to do what he did. I’m like, “Dude. I ain’t winning 70 fucking tournaments and 10 majors. It’s not going to happen. I don’t have time. I have kids.”

What did you think about Phil Michelson complaining about the rough during the Ryder Cup?
The game has changed. Phillip Michelson is one of the best players to have ever played the game. Period. I’m talking about his ability. Why would a guy like that say something? Do you think Ben-fucking-Hogan ever said, “I’m not playing if there’s rough”? He probably didn’t even know what rough was. “What’s that tall grass over there? Why is it higher than this? That’s stupid. I’m not hitting it over there.”

I’ve played many U.S. Open rounds thinking, “This fucking place is impossible.” But it was so much damn fun to see if you could put up a score. Because everybody else had to play the same course. U.S. Open in 2002 at Bethpage [New York]. Bethpage is so hard it’s awesome. I’m doing the press thing the day before the open, and they said there’s been some comments about No. 10. No. 10 back in ’02 was a 480-yard par 4, fucking awesome. Hitting a 3 wood [second shot] all day for me. But that’s OK. If the guys hit it farther than me and get to hit 3 irons, that’s because they hit it farther than me and they’re allowed to do. I have to hit a longer club. Whatever. They tell me Chris DiMarco, who is new to the tour, just said No. 10 is unfair because he can’t carry the 248 yards to get to the fairway. I said, “Chris DiMarco? First of all, what has he done to that point to merit saying anything? Second, if you can’t drive it far enough to get into the 10th fairway, unfortunately you don’t get to win. We’re so sorry. We’re so sorry we can’t cater to your dumb ass.”

My thoughts would have been, they make a mower cut to walk down. You know where that came from? Hogan. Like ’48 or ’49 when he won at Riviera. He said, “When I walk from the tee to the fairway where I just hit the ball in, I don’t need to get my shoes soaking wet.” That’s a fact. So they cut that mower line that they still use to this day. My point is that if I couldn’t drive 250 yards in 2002, I’m aiming down that fucking mower line. Am I going to hit it? No, because it’s only a few yards wide. But I’m going to try because that’s my only shot of not ending up in the rough if I can’t hit it that far. And if you can’t do one of those two things … it’s too fucking bad. Believe me, when I talk about this, they lose their fucking minds. “What do you mean it’s too bad?” It’s too bad! If I go out and play against Tiger, as I’ve done many times, and he’s outdriving me by 30 to 50 yards, what am I going to cry and go home? No! I can still compete. It’s just harder. That’s the way it goes.