Where to Smoke in Vegas: Casa Fuente 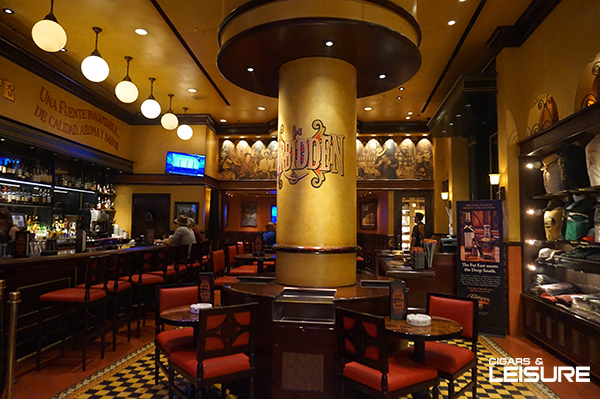 In Vegas, cigar enthusiasts of all ages and backgrounds flock to one of the city’s most popular lounges, Casa Fuente. Located in The Forum Shops at Caesars Palace, Casa Fuente has become a destination since it first opened its doors in 2005. Operated by Michael Frey, who also helped to launch the recently opened Montecristo Cigar Bar in Caesars Palace and the popular Rhumbar at The Mirage, Casa Fuente is where cigar enthusiasts can find many of Arturo Fuente’s most popular and hard-to-find cigars while enjoying a cocktail in a relaxing atmosphere. The Cuban-themed bar may seem slightly out of place among Caesars Palace’s Roman design, but it has made a home for itself and garnered a following that includes many cigar enthusiasts, both high-profile and curious ones who stumble upon it while exploring the mall.

“We get all types of people—male, female, young, old,” said Michael Fayerverger, Casa Fuente’s general manager. “In any given day, 100,000 people walk by, so we get people from all over the world and locals. As people walk by, they come in because you don’t have many cigar bars around. So they walk in, they relax, have a nice drink, and have a cigar.”

Casa Fuente sits in a corner of The Forum Shops, escaping the fuss and crowds of those coming to Caesars’ popular casino area, and in Fayerverger’s opinion that creates a nice and relaxing setting for those who want to escape the typical Vegas experience that comes with many casino establishments.

“We want people to come in, have a great time, feel at home, and try different things. You don’t have to worry about gambling in here,” Fayerverger described. “We also have a full-service bar. We have a lot of rare scotches, whiskeys—we carry a lot of rare Asian whiskeys. We’ve been known to make the best mojitos, I say in Vegas, but people say they’re the best all over. We make our own sangria and a lot of specialty cocktails. We have a lot to offer.”