Six Crazy Maniacs of the Stage 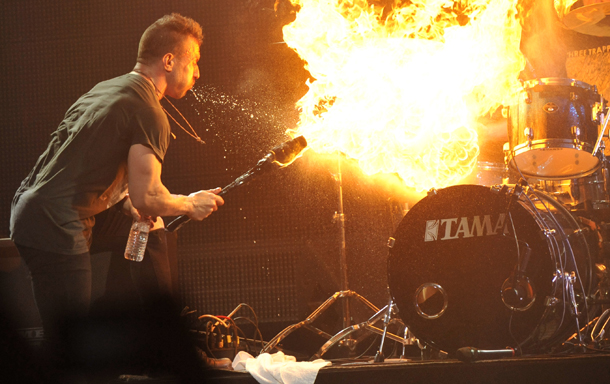 There have been some insane frontmen over the past 30 years—guys who stage dive, break their instruments, and cause general mayhem. But there are some who take things a little too far; thus, this list was born. And no, there are no death metal bands here, or people who dress in masks (I’m looking at you, Slipknot and Hollywood Undead), or Rob Zombie, Ozzy Osbourne, or Marilyn Manson. GG Allin isn’t on this list either because he wasn’t just an onstage maniac—he was an actual maniac. These are six guys who are freaking nuts and who know how to put on a good show but sometimes blur the line between good showmanship and being certifiably insane.

1. Greg Puciato of the Dillinger Escape Plan: As part of one of the wildest bands currently out there, Puciato has been known to breathe fire into the crowd, run on the tops of people’s heads, and bleed all over the stage. Here’s a video of Puciato jumping off a balcony into a scared, yet strangely willing, crowd.

And if you want to see 15 more minutes’ worth of Puciato scaring the crap out of the crowd, then check this out:

2. Till Lindemann of Rammstein: Lindemann is a certified pyrotechnic, which naturally means he uses a lot of fire in Rammstein’s live shows. But nothing was as crazy as when he set himself on fire and performed an entire song.

3. Philip Anselmo of Pantera: I’m not entirely sure how Anselmo, the flag-bearer of metal in the ‘90s, didn’t seriously injure himself during his shows. Take a look.

4. Trent Reznor of Nine Inch Nails: Reznor was the king of destroying his equipment on stage. Ever since putting his “crazy” days behind him (including going to rehab for heroin addiction), he has composed film scores for The Social Network and Gone Girl. Maybe his destroying days are over? Maybe.

5. Eric Nally of Foxy Shazam: Nally eats cigarettes on stage. Yes, you heard that right. He lights up a few cigarettes, smokes them halfway down, then eats and swallows them. All we can ask is, “Why? Just why?”

6. No list of crazy performers is complete without the absolutely bonkers Axl Rose of Guns N’ Roses. You could spend hours on YouTube watching all of Rose’s antics. This is the guy who would tell fans to beat the shit out of anyone throwing bottles—and one time even told the crowd to kill someone for throwing something. Now enjoy this compilation video from loudwire.com.

But this isn’t all! In my search for the craziest of the crazy, I came across some well-done compilation videos from loudwire.com, and I subsequently got lost in a YouTube vortex. Two hours later, I emerged, and here are three of the craziest.

*Special thanks to loudwire.com.

For more crazy bands, check out our interview with GWAR, and our coverage of Vans Warped Tour.