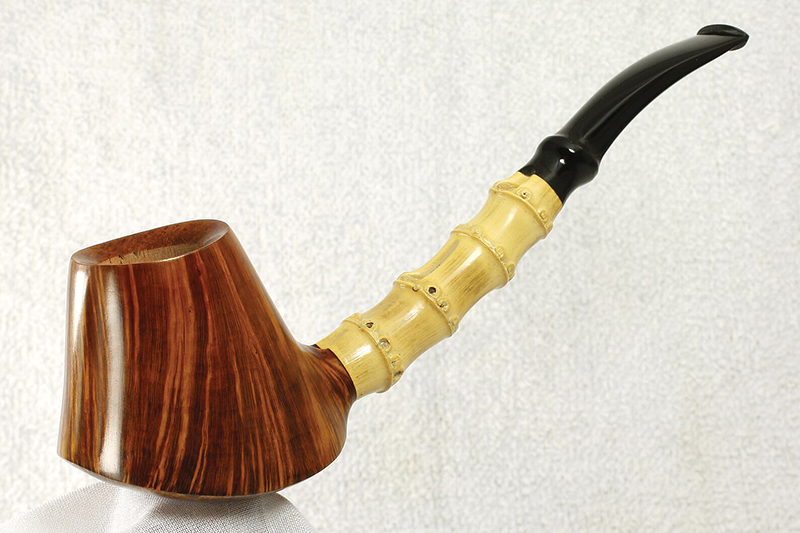 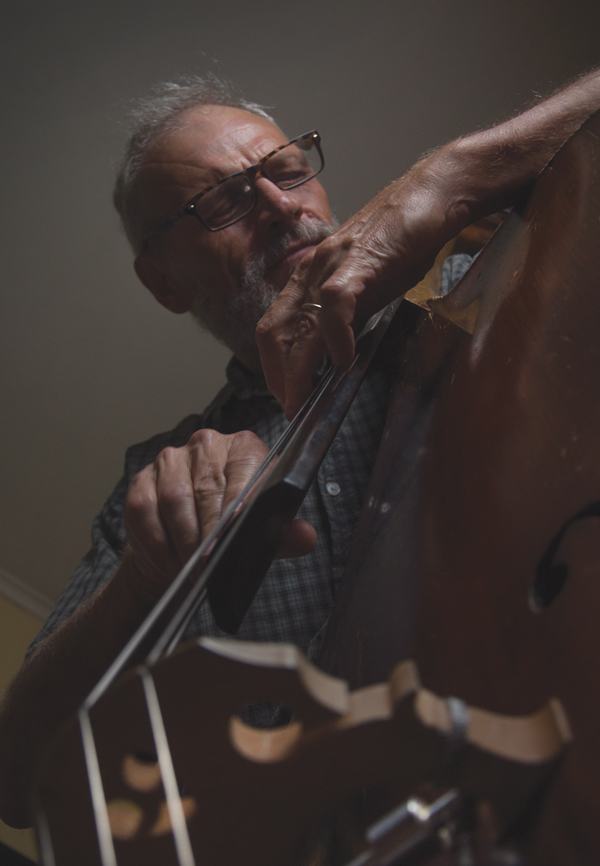 Music and pipe smoke have intertwined in an evanescent warp and weft that created the tapestry of Scott Thile’s life. He is esteemed in the pipe world for having created Pipedia.org, to say nothing of his own work crafting artisan pipes. Music has kept him busy as well, in piano restoration, bass playing, recording and family-raising. One of Thile’s three sons is a four-time Grammy Award winner. So Thile’s path was always bounded by music on one side and pipes on the other.

Thile (pronounced thee-lee) grew up in San Diego County, California, and early on spent a lot of time in and on the water. “I spent a lot of time surfing,” he says. “We always had some sort of waves happening.” At age eight, he received his first of several sailboats as a birthday gift from his sailing mentor, his stepfather. He is still an avid sailor, with a trailered boat “moored” in the driveway of his comfortable one-story brick ranch home in Kentucky’s fragrant Black Patch country, in the small town of Murray. During the fall evenings, you can smell the famous dark fire-cured tobacco scent as it wafts through the night air. It is a fitting locale for this passionate and prolific pipemaker. 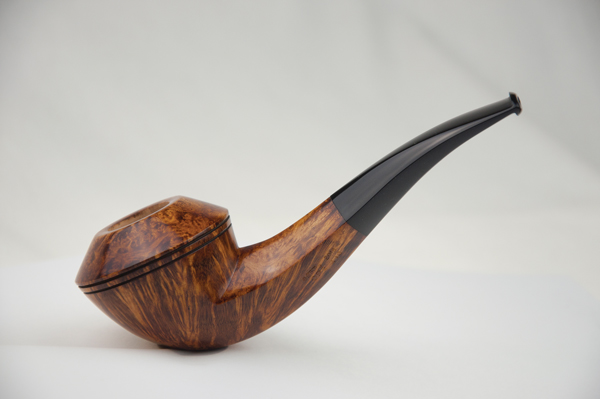 Every Christmas, Thile makes a pipe for each of his sons. “They are all casual pipe smokers,” he says, and their Christmas pipes have become a tradition. For one Christmas past, he created a semitruck from pipemaking materials. Thile says, “The cab is a block of briar, the wheels are Ebonite, and the cars are curly maple. They are hauling logs.”
While Chris Thile the bluegrass star is well-known, his father is not exactly unknown. As a pipemaker and founder of Pipedia, Thile has made his own mark among people likely to be reading these pages. “Pipedia kind of snuck up on me in a weird way in 2007,” he says. During a two-week period of sedentary recuperation from surgery on a toe, the frustration of his denied passionate pursuit of pipemaking led to the genesis of Pipedia. 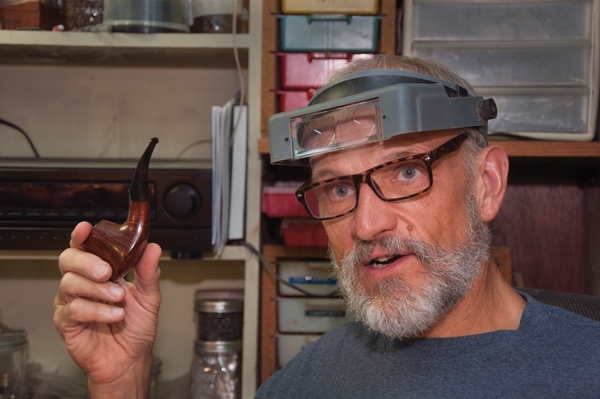 “I liked Danishpipemakers.com, and I had been scheming over something like that for American pipemakers,” Thile recalls. He created Pipedia by employing the same kind of open-source wiki software that supports Wikipedia. Having noted a conflict in the pipe-related entries on Wikipedia between the pipe people and the anti-tobacco factions, he felt there was too much tension there, and the pipe-related information lacked depth. Thile also believed that American pipemakers were underrepresented online at the time. Then later, after beginning

Pipedia, he said he realized “the pipe world is bigger than any one country,” and so Pipedia was expanded from a U.S. focus to encompass the global interest in pipes and pipemakers.
At first, Thile concentrated on his own interest areas after learning to use the wiki software.

“The power of this tool is that it is a collaborative environment. The power of our community is that we have pockets of information everywhere. There will be a collector that is super into one particular focus, be it a region, or brand or type of pipe.” Thile feels that tapping those far-flung resources is the future and appeal of Pipedia. Collaborations among aficionados, enabled through the media wiki platform, result in well-vetted articles that prove at once interesting, engaging and informative for Pipedia visitors. One of the best examples of this collaborative community is the Barling article because there is exhaustive research and highly informed scholarship behind it. Thile enthusiastically adds, “The Dunhill article is also super strong.” 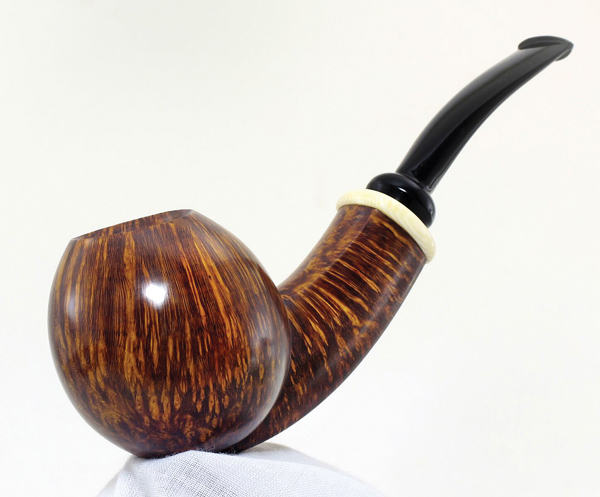 Tad Gage, Ben Rapaport and Rick Newcombe number among the well-informed contributors to the site. That they are great writers only adds to the strength of their contributions. Thile says, “A lot of knowledge comes out of Pipes & tobaccos magazine. We do not steal copyrighted pieces, but because P&T has so many well-done articles on the world of pipes, it serves as reference material for Pipedia entries.” He adds, “The Pipe Smoker’s Ephemeris—there is a body of work there, too, and there are many other publications.”

Thile may check on details and information in the articles if he has questions about an entry, and he may tweak the copy if necessary. Particularly helpful has been the photography of Doug Valitchka of Bend, Oregon, because of his skill at documenting the impressed nomenclature on pipes. These photos are plugged into the corresponding entries. Thile says such contributions are invaluable to the whole effort. “The pipe smoking community is already collaborative in nature. We might disagree on tons of things, but we all agree that pipes are pretty cool and have been a big part of our lives. We’ll tend to work through our differences, and that’s exactly what you want when you are trying to build an
information base.” 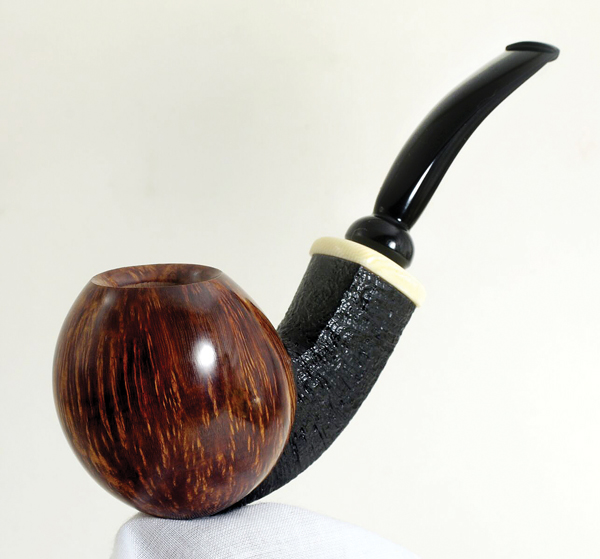 Thile’s tireless efforts have paid off. Pipedia is the second-most visited site on the internet for pipes and pipe smoking. Yet there are holes to plug and articles that need expanding. On this, he says, “I would like to have every article have a high degree of accuracy and scholarship.” To that end, he would like to flesh out information particularly on antique pipes—“pipes that are not already associated with well-collected and documented brands like Barling.” He is especially interested in pipes from the middle of the 19th century, from the 1850s back. He would also like to expand and develop the foreign language translations on the site.

There are already articles that have been translated into Spanish, French and Italian. Thile says there are large knowledge bases in Europe. “Italy has vast untapped knowledge. There is a real need for qualified and vetted persons to oversee the foreign language translations of Pipedia. The perfect thing would be to have Pipedia entries translated as a pipe club project, with members who have specific interests and focus divvying up parts to translate. We already get a lot of traffic from non-English speakers.”

His pipes can be found on Smokingpipes.com and his own website, www.sethilepipes.com.
Thile’s philosophy of pipemaking is simple enough: “I want to leave this earth knowing I made the best possible pipe I could with the skills I have.” He adds with a wry laugh, “It hasn’t happened yet.” Good pipemaking, like good music, depends on an inner strength (some would call it talent) that demands years of cultivation. It promises a journey that Scott Thile looks forward to with immense satisfaction.

This story first appeared in the Winter 2019 issue of Pipes and tobaccos magazine.