Jason Farr never thought he’d be in the cigar making business. His background was in engineering, as well as being a gymnastics coach for students ranging from infants to advanced adults. His cigar career started when he began frequenting a restaurant near his gym where the Cuban owner would host cigar nights once a month where they would roll cigars.

“I had no idea what I was doing and really didn’t do any research, but through a lot of trial—and way more error—I began to get the hang of it,” Farr explains. “It wound up being interesting to me, and I got the bug.”

He continued to make cigars for himself and his friends but never dreamed it would go anywhere beyond that. Word travels fast, though, and soon after, the owners of a local distillery asked if he would roll cigars at one of their release events. His hobby took off from there, with events at wineries, breweries, and even some weddings.

What started as a personal challenge to see if he was capable of crafting something he would enjoy smoking quickly turned into the launch of San Juan Cigar Company in 2013, and resulted in him quitting his regular job.

Today, Farr prides himself on his handmade cigars. The leaves come from several geographic areas, already dried, fermented, and aged. He then creates the blends, rolls the cigars, and dries them for five to 10 days. Additionally, all the leaves are processed, deveined, and rolled by hand.

“It makes me laugh sometimes because people often act like I’m doing something amazing,” he says. “I coached gymnastics for more than 30 years. I’ve taught people how to throw their bodies upside down, backward, and twist, while still landing safely on their feet, but rolling up some leaves is fascinating to people. I guess it’s a strange perspective, but it’s mine.”

One area Farr particularly enjoys is coming up with new blends to pair with liquors.

“A cigar is an experience,” he says. “It’s not like a cigarette where you step outside, smoke it quickly in a few minutes, then go back to work. I’m a happy guy if I get the chance to sit for an hour or so outside, and it’s a nice, warm evening and I can sip a whiskey and quietly smoke a cigar and relax.”

However, owning a small cigar business isn’t all fun and games, but he says he wouldn’t give it up for anything.

“I really enjoy working with people,” he says. “It goes back to my gymnastics and music background. Gotta love an audience, right?”

Here are a few of San Juan Cigar Company’s infused cigars to try: 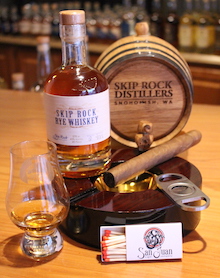 A mild-to-medium bodied cigar permeated with rye whiskey from a local distillery, Skip Rock, creating a smoother flavor palate. There are notes of chocolate and toffee that overlay the deep essence of earth and leather. 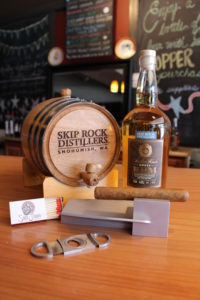 This cigar also utilizes Skip Rock Distillers by infusing/aging the cigars with Belle Rose Rum for roughly four to six months, resulting in an airy cigar with a rich bark and cedar aroma. The texture is rich and full with almost no burn to the palate. 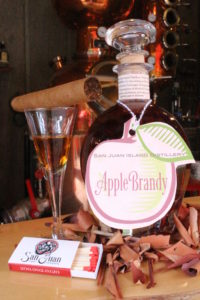 This mild-bodied cigar is infused with San Juan Distillery’s Apple Brandy, resulting in a light nose and hint of vanilla and caramel. This cigar pairs well with an after-dinner brandy or a sweet treat.