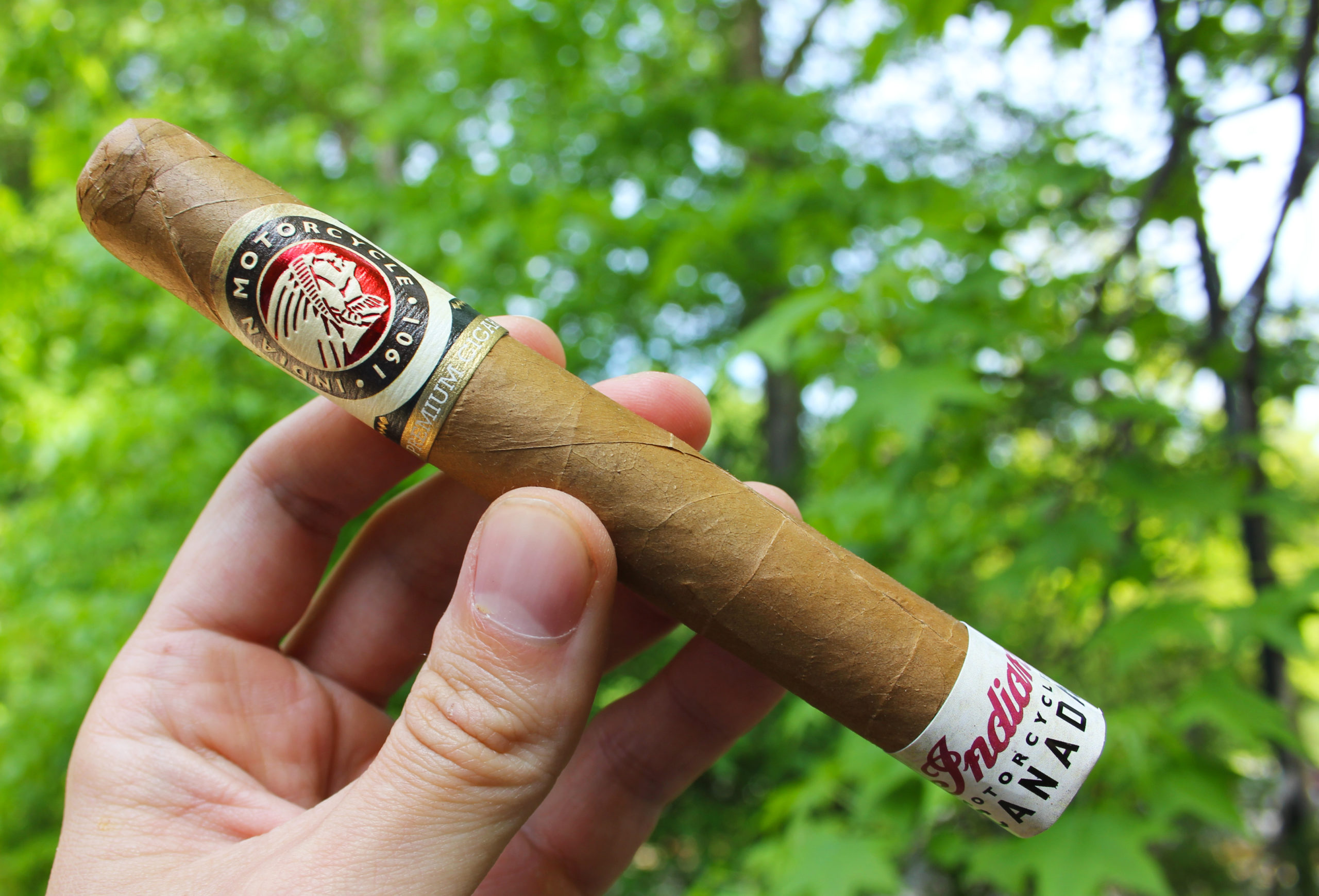 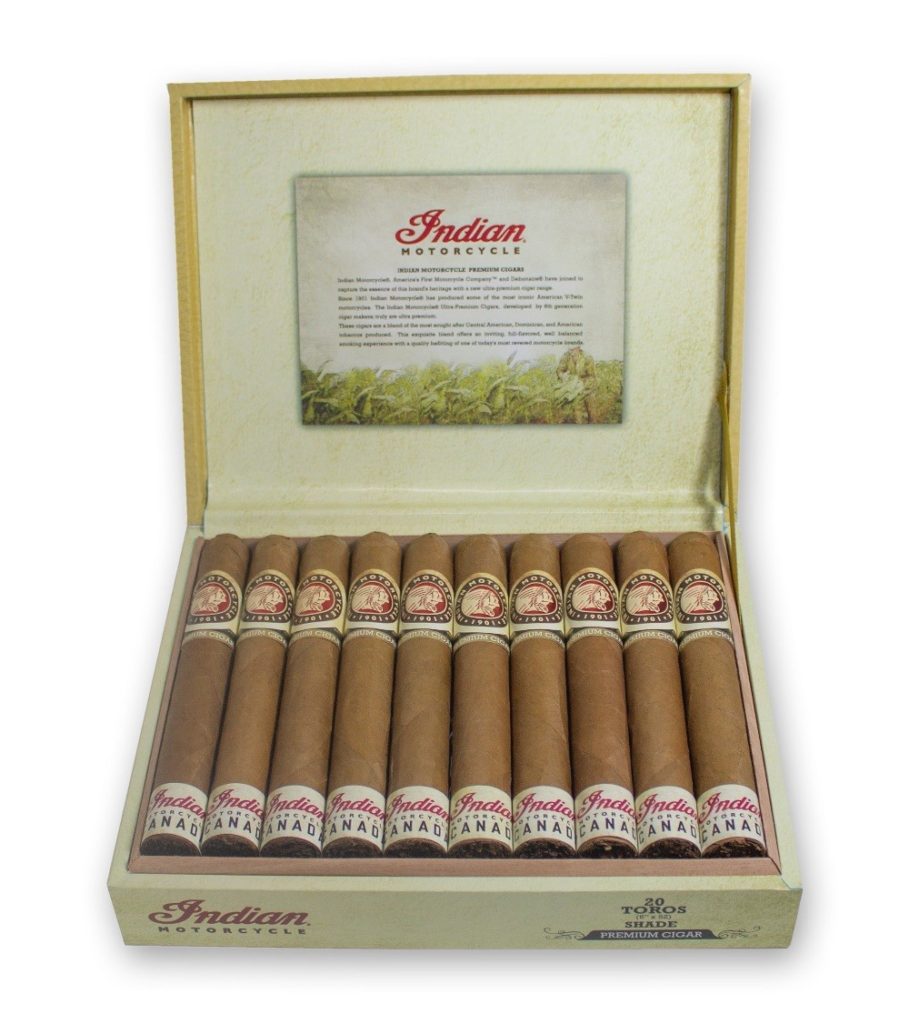 I’ve been a big fan of Indian Motorcycle Cigars for some time but up until this point they only had released two cigars, the Habano and the Maduro. Finally, we have a third cigar that has been added to their lineup: the Connecticut Shade. This new cigar will be released this month, but don’t get too excited yet if you live in the United States because this cigar will be available exclusively in Canada … for now.

Reintroduced into the premium cigar market in 2015, Indian Motorcycle Cigars is a licensed product between Debonaire House and Indian Motorcycle/Polaris. The Connecticut Shade cigars come packaged in a 20-count box that boasts a lighter leather top than their Habano and Maduro counterparts. Each cigar will also be adorned with a Canadian foot ring. The sizes offered through Brigham 1906 during this period of Canadian exclusivity will be Robusto (5 x 50) and Toro (6 x 52).

“This is a super exciting project with Brigham, a great company filled with great people,” says Philip S. Zanghi III, founder of Debonaire House. “I’ve known Dan and team for what seems like 20 years or so.  Once we began distribution in Canada, we all felt the fit was perfect right away: Indian 1901 with Brigham 1906. Connecticut Shade was a no-brainer for Canada’s favorite motorcycle company! I am excited to visit in May and enjoy this great cigar with the fine retailers and consumers of such a fine outfit in Canada.” 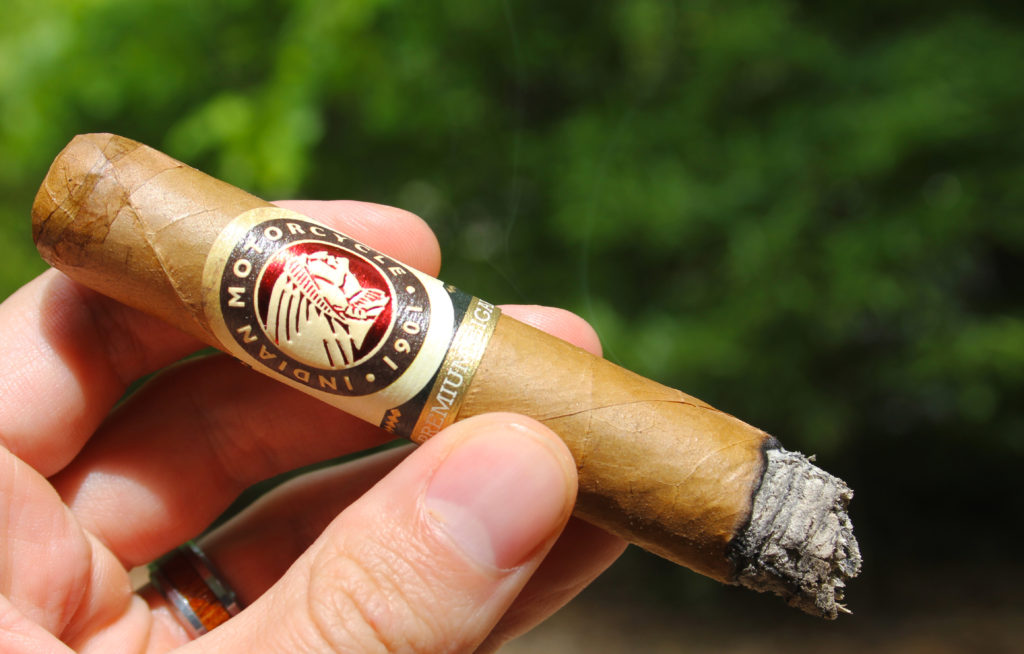 I live in North Carolina, so just the fact that I had the opportunity to smoke a Canadian-exclusive cigar was enough to make this a special occasion. Thankfully, the special quality of the cigar did not begin and end with where it is distributed.

The pre-light inspection revealed a nice, springy give when lightly squeezing the cigar, alerting me that this cigar would probably have an excellent and open draw. The lovely Connecticut Shade wrapper is definitely veiny, and the cigar smells earthy, with notes of cedar and some kind of nut. More on that in a moment.

The Connecticut Shade lights up quicker than any cigar I’ve smoked in a good long while, and, just as I expected, the draw was effortless—one of the easiest draws I’ve experienced in recent memory. There was a copious amount of smoke production with every puff; one tiny puff on this cigar and you’ll be exhaling smoke for the rest of your life.

I will note that for the first 15 minutes or so, I was picking up an off-putting bitter taste in the cigar. I was worried this would continue throughout the cigar, but for the most part it went away shortly into the second-third of the cigar and didn’t return.

There are excellent earthy aromas in the voluminous smoke, and I’m picking up quite a bit of nuttiness, possibly nutmeg? In the second-third the cigar started getting a little sweeter with some notes of caramel coming in and mixing well with the earth and nutmeg. Toward the end of the second-third, I started getting some subtle sour flavors on the sides of my tongue, but it didn’t bother me at all as it stayed subtle and went away in the final-third. Some pepper appears in the final-third and gives the flavor a nice bit of spice.

The cigar was excellently constructed; I didn’t have to touch up the burn line a single time. The salt-and-pepper ash held at just over an inch before falling off on its own. I will say this cigar went fast! I can make most Toros I smoke last for 80 to 90 minutes, but this one was through in 65 minutes, and I did my best to draw this smoke out.

Coffee! This is a morning cigar through and through. 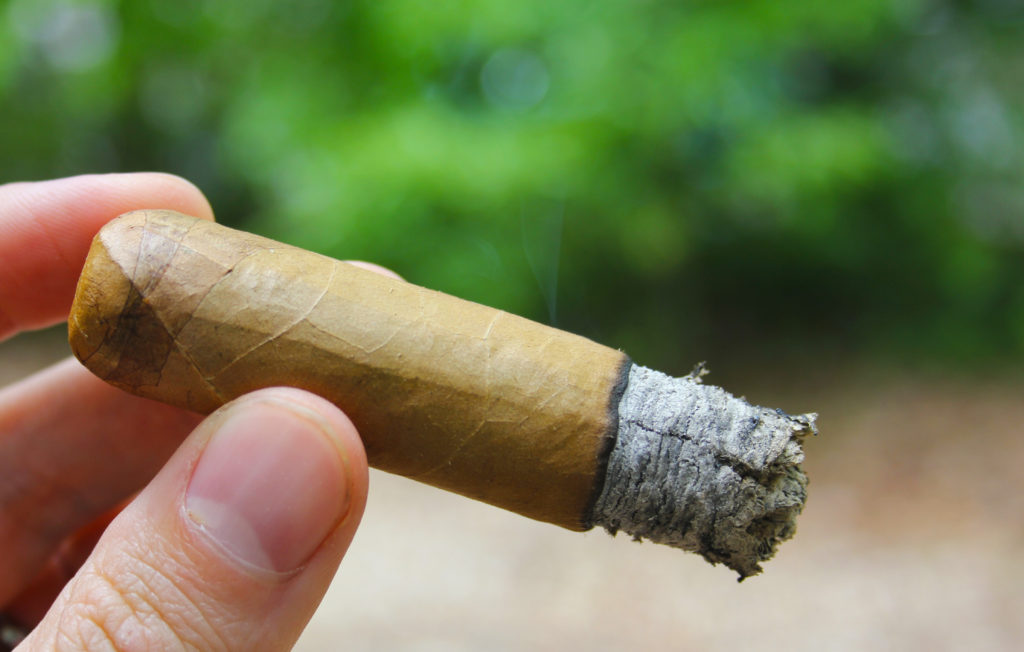 I love a good mild cigar, and this is the perfect stick to go with your morning coffee. I loved the open draw and nutty aromas, but the bitter beginning and the subtle sour notes in the second-third knock this one down slightly, although not by much. It’s still an excellently constructed, mild cigar with plenty of flavor that should win over quite a few fans in Canada and is a great third addition to the Indian Motorcycle Cigars line.

For more info, head to indiancigars.com.