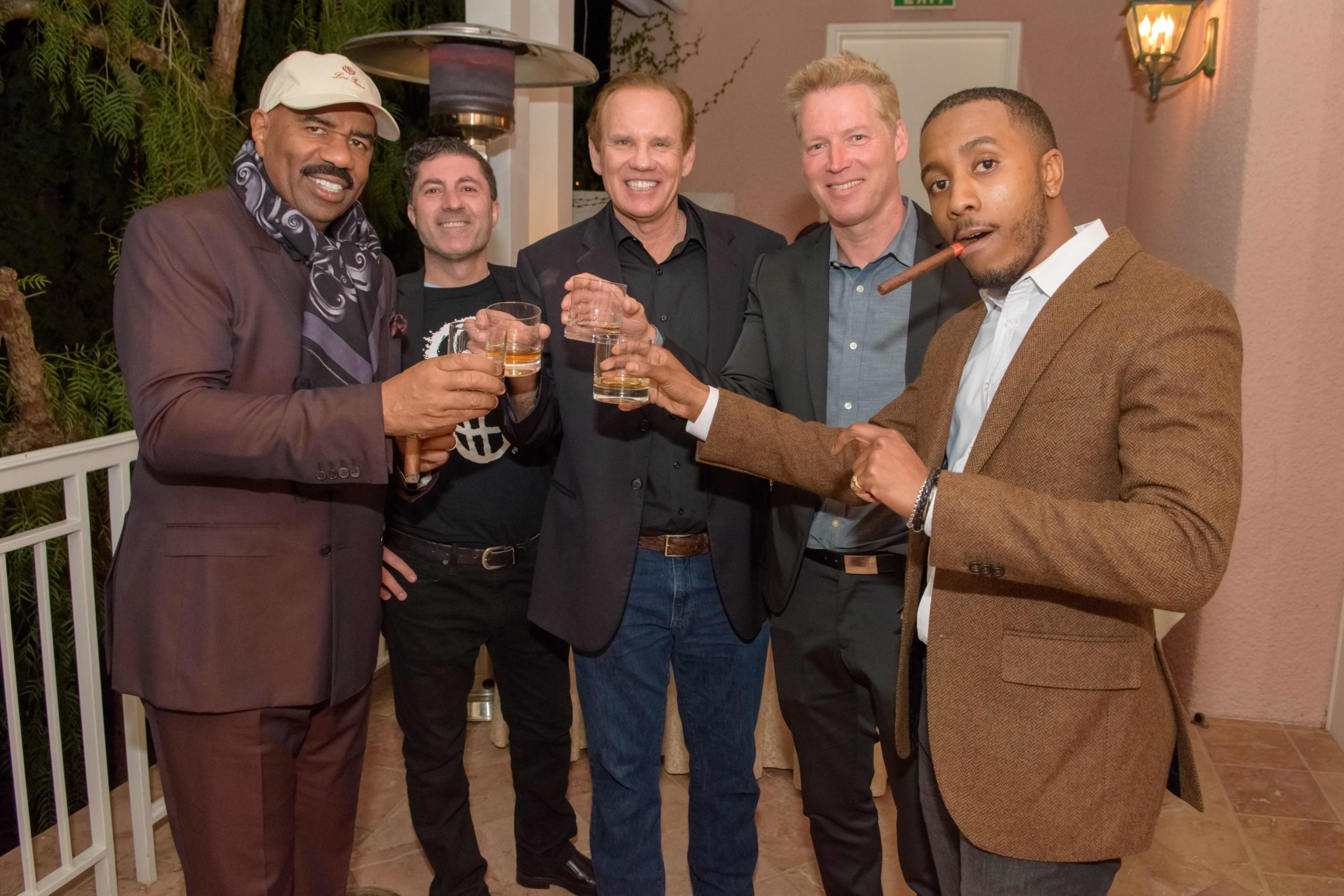 In 2012 the hotel became the first historical landmark in Beverly Hills. Its magnificence, who’s-who history and reputation to spare no expense to create the ultimate customer “campfire” experience for each guest was the reason Marshall chose “Hotel California”  for one of his international Modern Day Campfire’s.

Mr. Steve Harvey, Frank Stallone, Ralf Moeller, Cece Peniston, Prince Khaled Al Saud and an esteemed gathering from the entertainment, sports, political and business worlds joined the sold-out event. Guests entered the hotel by way of the famous red carpet that every A-List Star, Royal, President, and Sovereign have tread. From that point, guests were transported into another world of glamour and ultimate luxury.

Upon check-in, guests received a DM Campfire package with Cigar Aficionado 92 point rated Daniel Marshall Cigars including the Papa Joe Panatela, a DM Robusto and the DM Since 1982 Lighter and Cutter.

Senator Isadore Hall opened up the dinner and introduced Marshall. Daniel Marshall expressed his gratitude to the 55 distinguished guests, thanking them for their trust in the Daniel Marshall brand to attend the evening.

“To be here with you at the Beverly Hills hotel is a dream come true,” said Marshall. “The standard of elegance, tradition and service of this hotel represents what we all share in our own respective fields. The Rat Pack, Howard Hughes, and Marilyn Monroe all shared the campfire here and made it home. One of my favorites stories is when Richard Burton and Liz Taylor checked in; they had a standing room service order for two bottles of vodka at breakfast and two for lunch. What happened to those days?”

Marshall continued, “The Campfire is a place of potential which brings with it a taste of the timeless. Gathering around with cigars is primal and precious. A place where acquaintances can move toward real friendship. What joins us together, the golden thread that runs through our veins and drives us to live our dreams is a commitment to create in all we do, is a richness of character and generosity of spirit. So when someone asks you do you smoke, the true answer is no. We don’t smoke, we taste. Jeremy Irons summed it up when he compared cigarettes to cigars. He said, ‘Cigarettes are like having sex, cigars are like making love.’”

A 3-course sit-down dinner was prepared by the award-winning chefs and impeccably served by the “what ever you need, we will take care of “ team of 10, anticipating every need. The elegant meal started with Caprese, followed by the guest’s choice of Sea Bass or Filet Mignon, and finished with a Fresh Baked Apple Tart. Double Diamond Schrader Cabernet and Wine Spectator 92 point rated Robert Mondavi Oakville Fume Blanc complemented the exquisite meal perfectly.

Guests quickly vacated the room after dinner to light up their cigars on the gorgeous 100-meter terrace while being entertained by live music and a famed magician, creating “Golden Moments” of camaraderie. Personal and profound campfire stories were shared that one would not normally hear or share. The use of smart phones was restricted to further create the authentic “campfire” where, without technology, time can be of the moment. Celebrities and guests welcomed this policy that added an intimate and exclusive feeling of relaxed friendship.

Carving out time from hectic schedules, the esteemed guests flew in from New York, Texas, Arizona, Saudi Arabia, Sacramento, San Francisco and Vietnam, demonstrating the power of the cigar and the appeal of the campfire.

A few comments from the evening:

“I have been looking forward to this cigar night. I started my day at 6 am hosting my radio show, and then taped 4 episodes of Family Feud. I’m happy to be here, to unwind, and to enjoy a cigar.”
–Steve Harvey, Comedian, Host, Radio Personality, Actor and Author

“Daniel Marshall’s cigar night was filled with wonderful people of good will along with great cigars and tequila.”
— Frank Stallone, Actor, Singer-Songwriter

“Daniel Marshall’s campfire event that I experienced in Los Angeles was on fire! It was one of the classiest events I’ve attended in awhile with an epic cast in attendance. You don’t want to miss the next one…”
– Cece Peniston, Pop Recording Artist

Golden Ticket holders were impressed at the value they received upon discovering the golden bag on their seat that was filled with a treasure trove from the DM Collection. The value of the DM Desk-Travel Humidor in Burl ($400) and the famous DM 24kt Golden Cigar ($295) exceeded the $475 price paid for the Golden Ticket. A 750ml bottle of Padre Azul Anejo Tequila ($100), a set of Golden DM Cufflinks ($50), 4 – Cigar Aficionado 92 point rated DM Cigars, dinner, and fine spirit tasting caused those that did not pre-purchase the Golden Ticket, regret since they did not take advantage of the spectacular $1200 value. Every guest received at the conclusion of the evening two DM Red Label Robustos, a 50 ml bottle of Padre Azul, complimentary membership in The Daniel Marshall Campfire Club (DMCC) with benefits including exceptional offers and 1st ticket priority to all future Modern Day Campfires.

Beverly Hill holds a special place for Marshall as his Mentor, Papa Joe lived 5 minutes from the Beverly Hills Hotel. Said Marshall; “37 years ago I was a surfer, sailor, boat builder with a dream to sail around the world, when the idea for making a cigar case for Alfred Dunhill of London happened up the road from here. I made a 3-cigar case as a gift for my girlfriend’s Grandfather and when he saw his gift, he predicted my future. He looked at the cigar holder that I carved out of teak wood that held his favorite Dunhill Panatela cigars and said, ‘I’m sure my favorite men’s store, Alfred Dunhill of London will buy this. If you want, you can borrow it and show it to them, set up a factory, sail around the world, do it all.’  37 years later, He was right. Tonight, the Panatela cigar you have is a cigar to honor the Papa Joe’s in all of our lives.”

An impromptu raffle during the evening raised $4000 for a young men’s mentoring foundation. “The significance of having a mentor who believed in me had such a profound impact that changed the course of my life showing me that dreams can come true,” said Marshall. “We will have charity raffles and auctions with all future Campfire events.”

To reserve your seat at the next Campfire, email thecampfire@danielmarshall.com. 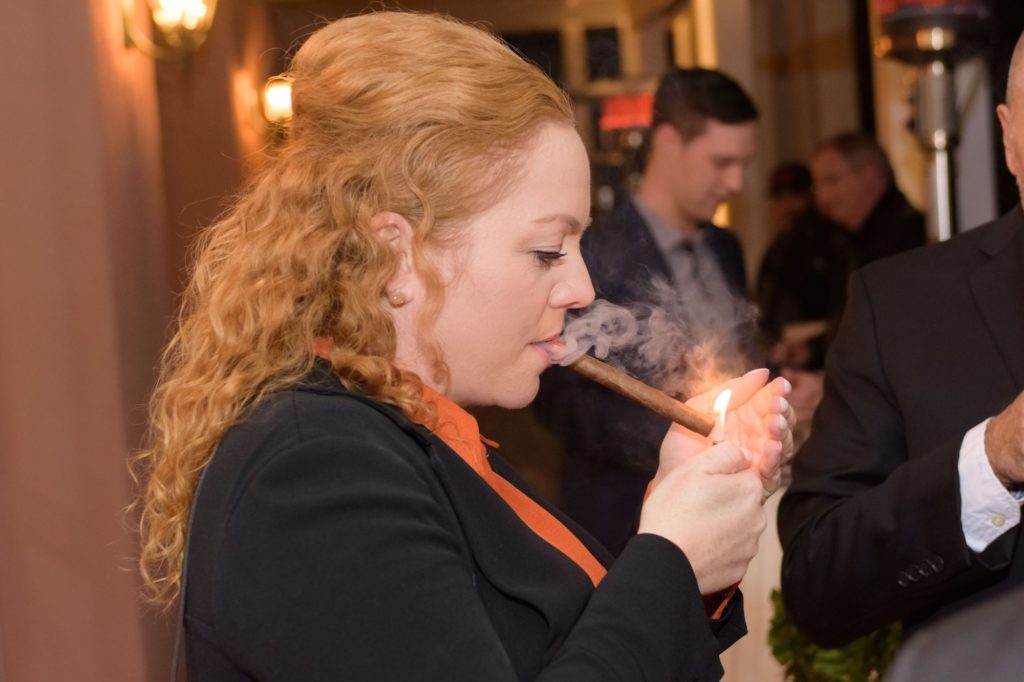