The Story of Plasencia Cigars 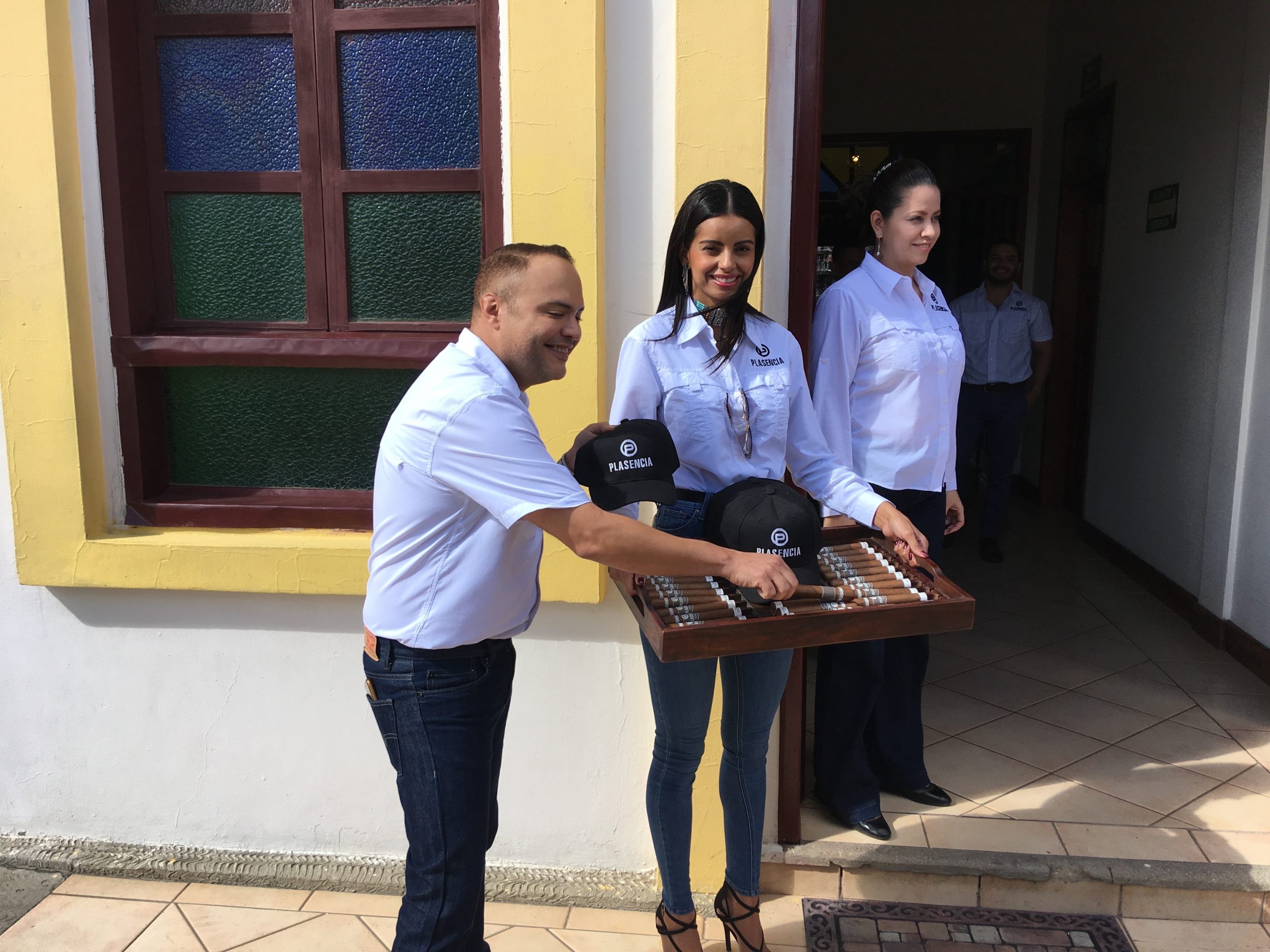 The Plasencia family has been growing tobacco for over a century and making cigars for decades—about 45 million cigars last year alone. While the company makes cigars for Altadis, Villiger, Quesada, Rocky Patel, Alec Bradley, and Maya Selva, among others, until last year it had not made a line under its own name. Nestor Andres Plasencia walked into the 2017 IPCPR show in Las Vegas, Nevada, and said his heart almost beat out of his chest when he saw his family name above a booth for the first time.

In the six months after their debut, the Plasencias sold about 300,000 of their own cigars. This year they are projecting about 1 million over four different lines in the U.S. Nestor Andres says consumers want to know more about cigars these days, including who makes them and where the tobacco comes from, which is why the Plasencias decided to put their name on a cigar. “We want the consumer to know where we come from, my father’s story, my grandfather’s story, my great-grandfather’s story but mostly my dad’s story because he lost everything twice in his life and was able to create this beautiful company.” 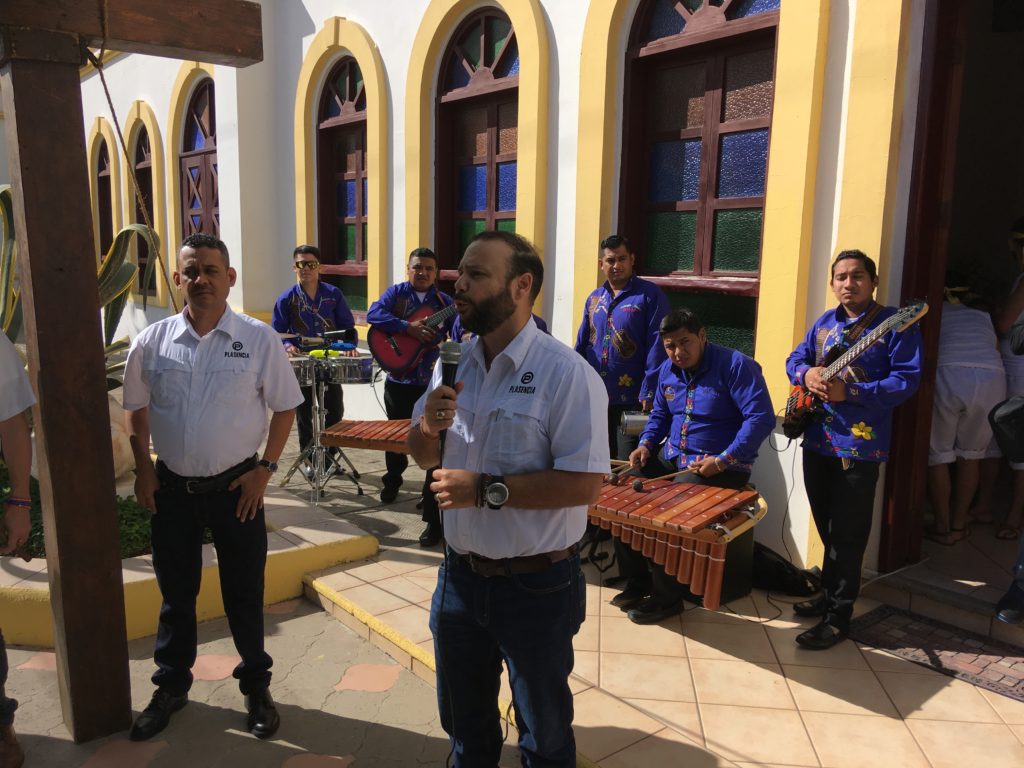 It certainly was not easy for the family. It began when Nestor Andres’ great-great-grand uncle Eduardo Plasencia left the Canary Islands with his two brothers and headed for Cuba in 1865. The trio left family behind and rented a small farm from the Cifuentes family where they could grow tobacco and process wrappers in the Vuelta Abajo region. In 1890, Nestor Andres’ great-grandfather Sixto made the ocean voyage by himself to that farm at the age of 14.

The Plasencias worked hard to make their tobacco the best in Cuba, not only growing but also processing and sorting the leaves. In 1920, Sixto Jr. was born, Nestor Andres’ grandfather. Sixto Jr. grew up in the tobacco family and eventually started a company with his brothers, called Hijos de Sixto Plasencia (which translates in English to  “Sons of Sixto Plasencia”). In Cuba, they became very successful in growing and sorting wrappers for companies in Cuba as well as the United States. By 1949, Sixto had a son, Nestor, who would continue the family traditions. 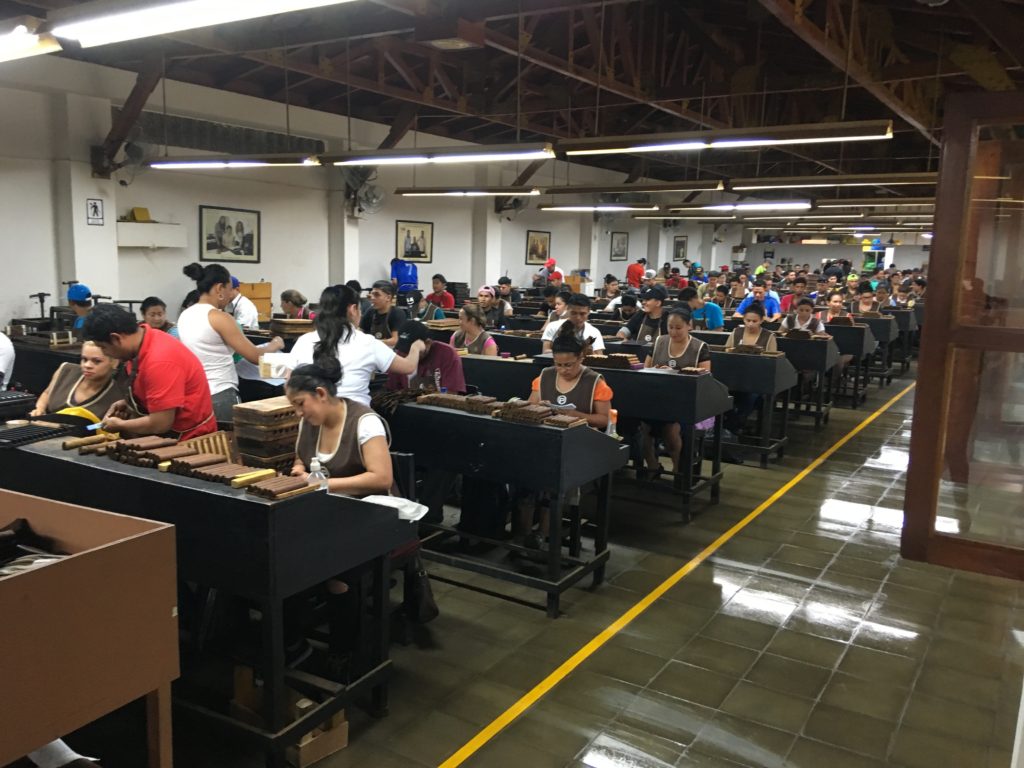 But in the late 1950s with the social revolution in Cuba led by Fidel Castro, things began to change. Sixto’s friends, Julio Eiroa, Carlos Torano and others, began to flee the country. Farms and factories were being seized, but the government left the smaller Plasencia farm alone. Sixto Jr. believed the seizures and the government would not last. He was wrong. On Oct. 3, 1963, troops arrived and took all of the Plasencias’ land and any assets the family had earned as a result of their hard work. The only thing left was the family house. It was then that the Plasencias knew they had to leave their homeland.

It took time for Sixto Jr. and his family to get out. Initially he planned on going to Jamaica to run a tobacco farm, but the farm went bankrupt before the family could leave. By May 1965, Sixto Jr. left Cuba for Mexico with only $100 in his pocket. He called his old friend Julio Eiroa in Honduras. About a month later, Eiroa got Sixto a visa for Honduras while the family lived off of what little money they had and gifts from relatives in the Unites States.

Sixto Jr. telegraphed Eiroa to let him know that he was coming to Honduras, but the telegram never arrived. When he got to Tegucigalpa, no one was there to meet him. Fortunately, Sixto ran into an old friend from Cuba and was offered a job in Danli. Nestor remembers going to Danli in the 1960s. He says there was very little there—no phones, sporadic electricity (if any), few roads and lots of rain. Fortunately, his stay in Danli was brief, and Nestor was soon going to school in Esteli, Nicaragua, as his father worked there for Caribbean Tobacco. Tobacco from Central America was on an upswing as Cuban leaf was banned from the United States and cigar makers needed a replacement. By the end of the 1960s, Sixto Jr. had moved from Esteli to Jalapa to help the company run a tobacco farm. When he was not in school Nestor spent all his time at the farm with his father. 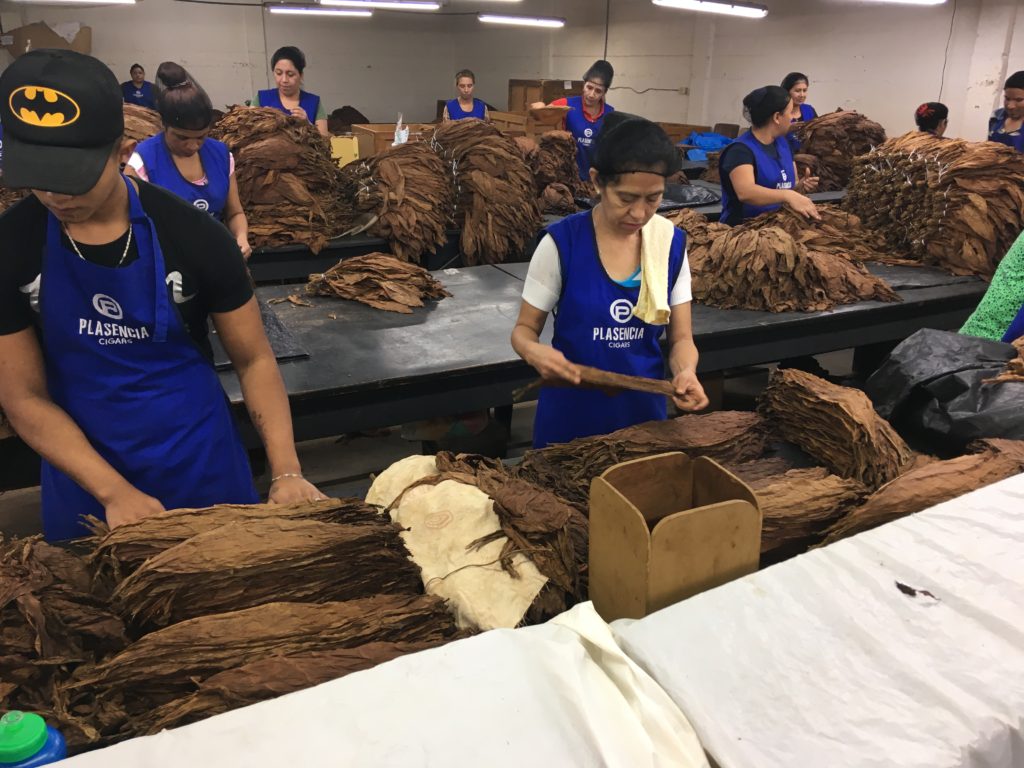 In 1972, Nestor partnered with his father to grow Candela wrapper and Cuban seed filler for Nicaraguan Cigar—the country’s first cigar factory owned by Cuban expats, who were friends with Sixto Jr. Shortly thereafter, Nestor started working with Caribbean Tobacco, selling his tobacco to them as well. Things were looking up until 1978, when a civil war broke out between the left-wing Sandinistas and the Somoza government. Not waiting for the inevitable to occur, the Plasencias left, this time heading to nearby Honduras where Nestor found a farm in Jamastran. His first crop was exceptional, but when he went to sell it, Caribbean Tobacco was not buying because of the political situation in Nicaragua .Nestor was eventually able to sell his crop to the Olivas. By 1979, the Nicaraguan civil war was in full swing, and the Nicaraguan farms and factories were being taken by the Sandinistas, just like in Cuba. Nestor had left in time, and he started expanding his farm. It looked promising for Nestor until Feb. 26, 1980, when a worker awakened Nestor to say there was something wrong with the crop.

Nestor rushed to the fields and picked a few leaves. He knew something was wrong, but what? He showed the leaves to his father, who immediately pronounced the disease—blue mold—adding that the field would be gone the next day. It was. The only thing that saved Nestor was the crop that had already been picked and was in the barn. The following year, he reduced his acreage and used a fungicide recommended by the Olivas. It worked. Nestor increased production of his crops the next two years using the fungicide. The trouble is that blue mold adapts, and it eventually rendered the fungicide useless, causing Nestor to lose 90 percent of his crop. What he had left was only good for use as fillers and binders, and no one wanted to buy it. So Nestor kept it. It became the collateral for his 1984 crop. But blue mold struck again in 1984 and 1985, and he could only salvage about 10 percent of the tobacco. It left him with a huge store of tobacco—over 1 million pounds—but he also had crushing debt. He knew he had to use or sell that tobacco, and since no one was buying, he bought some cigar molds, started a small factory in Honduras and was able to start using that tobacco to make cigars for others. But Nestor also learned a lesson: He figured out that if he planted two months earlier, he’d avoid the cooler and wetter weather that had attacked his fields. A couple of big contracts helped Nestor climb out of debt, and by 1991, he opened a factory in Nicaragua because the political situation there had stabilized. By the time of the Cigar Boom, Nestor was running at full production in five factories split between Honduras and Nicaragua. All that aged tobacco came in handy. By the end of the Cigar Boom, Nestor’s son Nestor Andres had graduated from college with a degree in agricultural engineering. 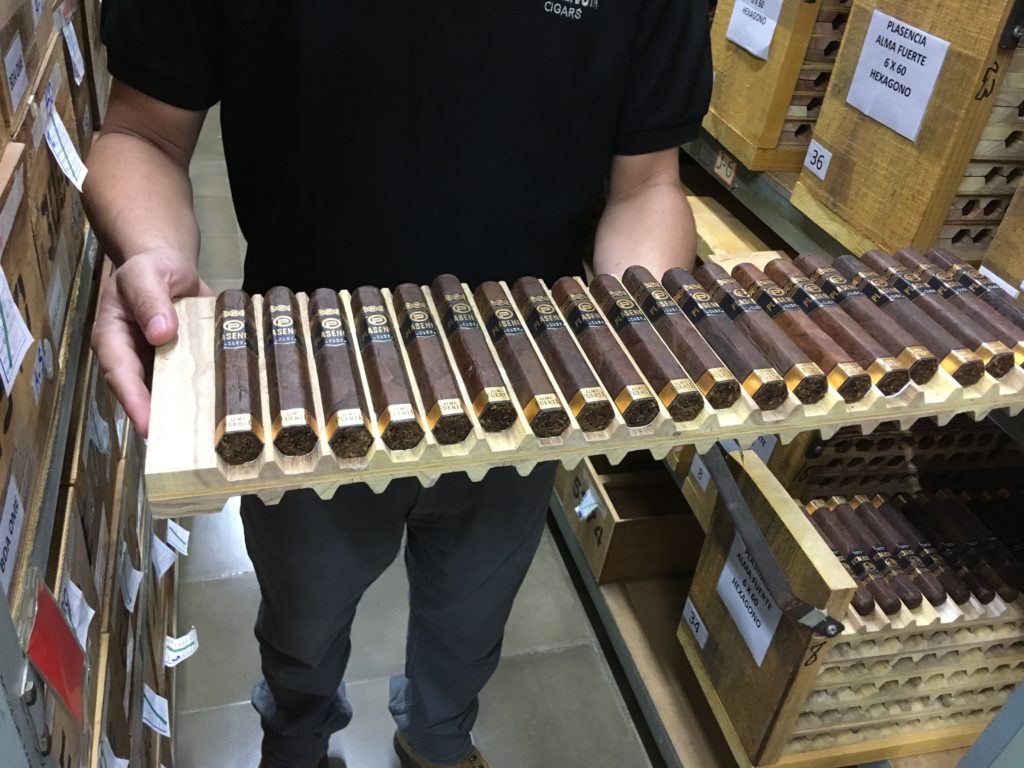 At college, Nestor Andres had studied organic farming and was determined to bring those skills to tobacco. With the backing of his father, Nestor Andres started with a small field using garlic sticks to help keep pests away and using other organic tricks like planting sunflowers to bring in beneficial bugs to eat the bad insects. The initial crop had a low yield. But as Nestor Andres experimented, the yields increased. By 2001, the family released the Plasencia Organica—the only cigar that is certified organic. The distribution was very limited and eventually was primarily a product for Europe.

Besides growing tobacco organically, Nestor Andres, his brothers Gustavo and Jose, Luis and father Nestor had another goal—to release their own line of cigars. That debut was last year. Today, the family has rebranded the Organica as Reserva Original. The first release was the Alma Fuerte, which uses tobacco that is 9 years to 10 years old. The other two were the Alma de Campo, using tobacco that is 7 years old, and the 146 Cosecha, which gets its name from the family’s 146th harvest in 2011–2012. The 146 Cosecha is a blend of Nicaraguan and Honduran tobaccos, while the Alma Fuerte and Alma de Campo are Nicaraguan puros. 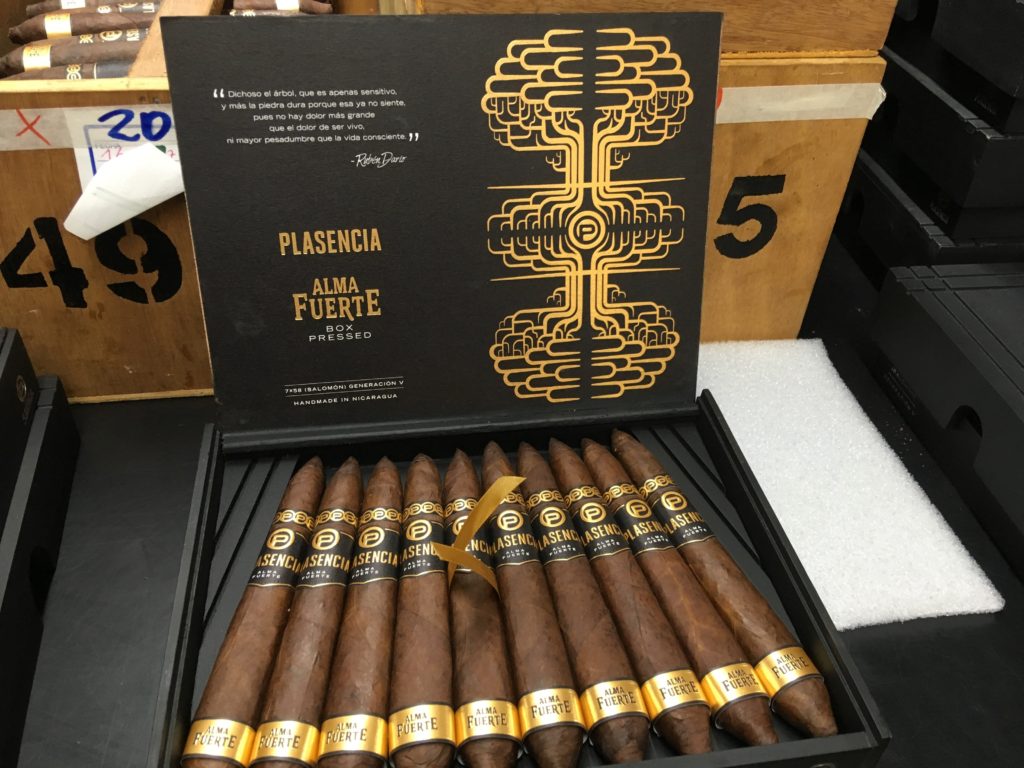 Nestor Andres says he and his father are now using what they’ve learned on the organic side to help increase the quality of all their tobaccos, adding that they never stop learning. “Everything we learn from every small farmer, from the Dominican [Republic], from Cuba, we are open-minded, and we learn from everybody as they do things differently. We don’t say we’re the best; we just work hard.”

As for their line of cigars, Nestor Andres, his brothers and his father are sticklers for quality. With their name out there, the family wants to make sure everything is right. While Nestor Andres oversees the tobacco operations and factories with his father, Jose Luis in July was named vice president of Plasencia 1865—the family’s distribution arm—to again assure quality. Jose Luis moved to Miami, along with brother Gustavo as they work to expand the family’s presence. Nestor Andres says, “Right now, we are technologically stressed, and people want to take a break from that stress and reward themselves with a great cigar. It gives them an hour or two to themselves once a week or even once a month. When they do, you want them to feel the best out of that time. We want that time and our cigars to be the best.”

by Frank Seltzer for Tobacconist Magazine.

Davidoff of Geneva Opens in Brooklyn