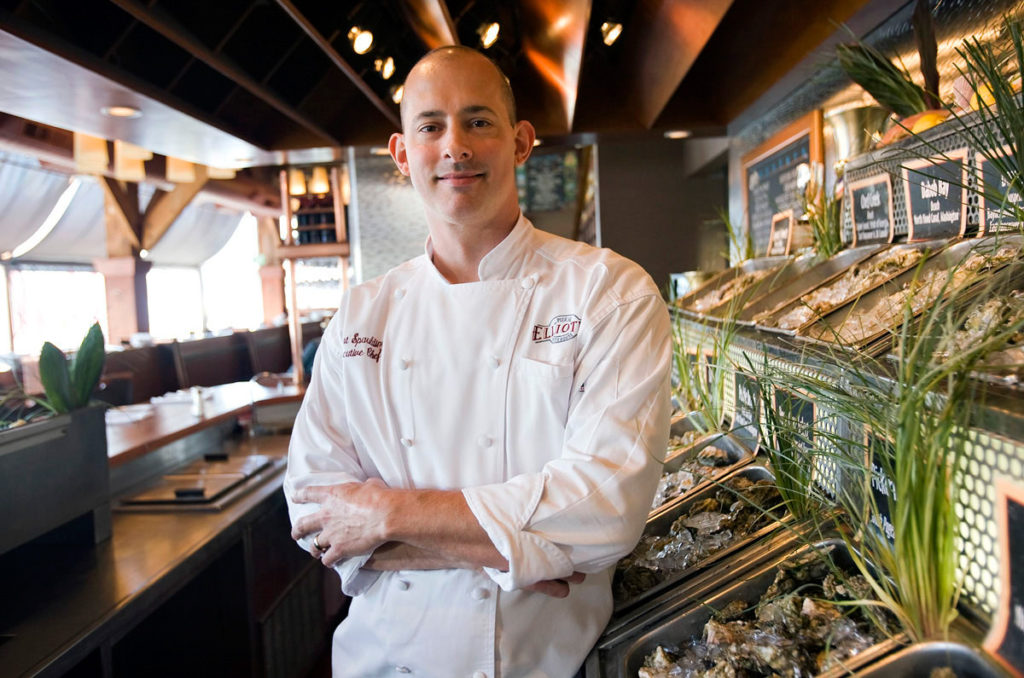 Robert Spaulding, executive chef of Elliott’s Oyster House and Café 56, which sits right on the bay in Seattle, is a die-hard fan of seafood. He attended cooking school in the city before spending a decade in Las Vegas, but eventually he succumbed to the draw to return home to the Pacific Northwest and has been there ever since.

“I spent a great deal of time with fishermen of all kinds and oyster farmers across the region,” Spaulding says. “I’ve learned that there is never going to be a time when there isn’t something new to learn. That’s what keeps me fascinated and dedicated to seafood.”

Spaulding is also dedicated to using local oysters harvested by hand by local farmers, greatly reducing disturbances in the environment. He says that Puget Sound is one of the finest oyster-producing regions in the world for quality and variety and that there’s little need to go outside the region.

“Elliott’s is, and will continue to be, one of the leaders in sustainably sourced seafood,” Spaulding says. “This is important because seafood continues to see increased demand and pressure worldwide.”

Ready to try some now? Hang on a minute. Many of us are total novices when it comes to oysters, so here’s a crash course from Spaulding, and you’ll be ready to slurp down these tasty gems in no time. 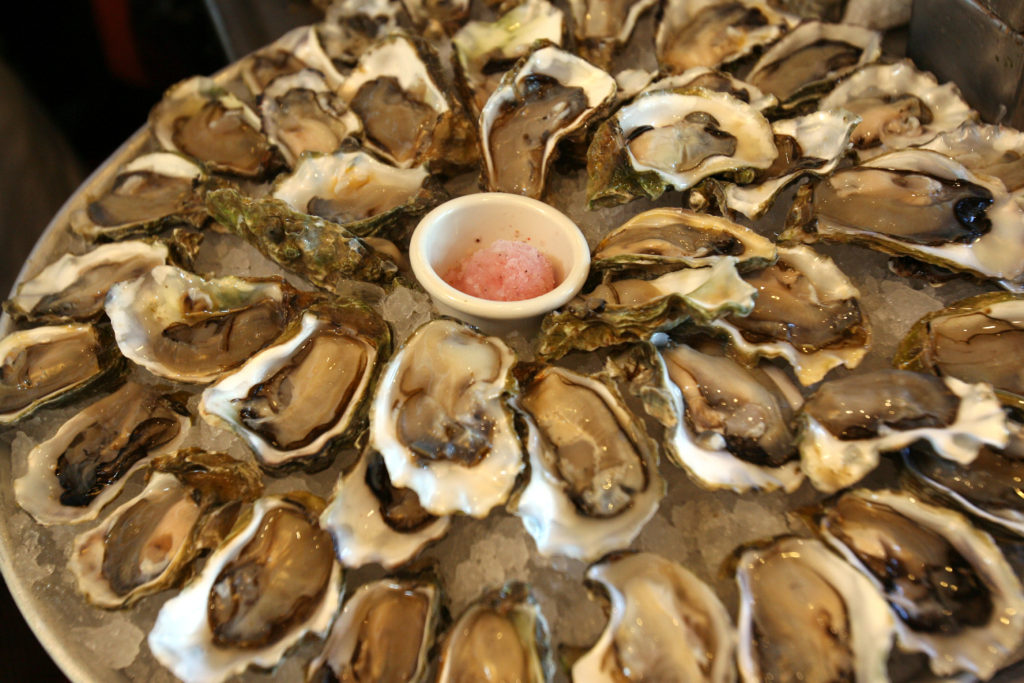 The farmers in the Puget Sound region produce five different species of oysters, each having its own distinct flavor and physical characteristics. This difference in flavor comes from a combination of being raised at different points in the water column, different levels of salinity, different minerals, and even differing amounts of plankton.

Oysters can be raised right on a rocky beach or suspended 60 feet down from a raft floating offshore. To ensure that the shell isn’t too brittle, which makes it difficult for a shucker to open, an oyster will typically be tumbled by a machine. This agitates them and subsequently strengthens and gives them a more deeply cupped shell. Oysters raised on beaches, without mechanical tumbling, can become long and gnarly with a shallow cup that is more difficult for shuckers to open.

Pacific oyster: Originally from Japan, this oyster is the most readily available and has the greatest variation in flavor, texture and appearance. Its flavor can be sweet, buttery, fruity, metallic, savory, or downright funky. Textures can range from watery and gossamer to crunchy.

Kumamoto oyster: Also from Japan, this oyster takes longer to grow. The Kumamoto is sweet, firm, buttery, and has overtones of a ripe honeydew melon. Because of its smaller size and approachable flavor profile, it is often the oyster of choice for people who are just beginning to explore the delectable mollusks. Most Kumamotos have a “cat paw” appearance with a deep cup and are only 2 to 3 inches long.

Olympia oyster: The only oyster native to the Pacific Northwest, the Olympia takes three years to grow to the size of a 50-cent piece and doesn’t get much bigger than that. Olympias have a complex flavor accentuated by strong mineral and celery flavors. They can be sweet, buttery, nutty, or musky.

Eastern oyster: Native to the east coast of North America, these oysters have a firmer texture and a range of flavors, from bland to mildly salty and sweet to intensely briny with mineral and seaweed undertones. Eastern oysters range in size, with the typical cocktail oyster being 3 or 4 inches, but can also be 5 inches or more.

European flat oyster: These possess high concentrations of minerals and iodine; therefore, flats are for those who enjoy strong flavors. Their flavor has often been described as fishy or like sucking on a copper penny dredged in salt. Flats have a very shallow cup—resulting in their name—and are usually round. They have become increasingly hard to find and account for less than 1 percent of oyster production.

Spaulding recommends trying smaller oysters of the Pacific, Eastern, or Kumamoto variety if you’re a beginner, and to go an oyster bar that has a wide variety and an experienced and knowledgeable staff to guide you.

“A good shucker will be able to guide a beginner toward oysters that gradually increase in intensity,” he says. “This will allow a beginner to build up a taste for these wonderfully complex and mysterious bivalves.”

Here’s the best seafood spots across America. And do you need more food tips? How about for barbeque?