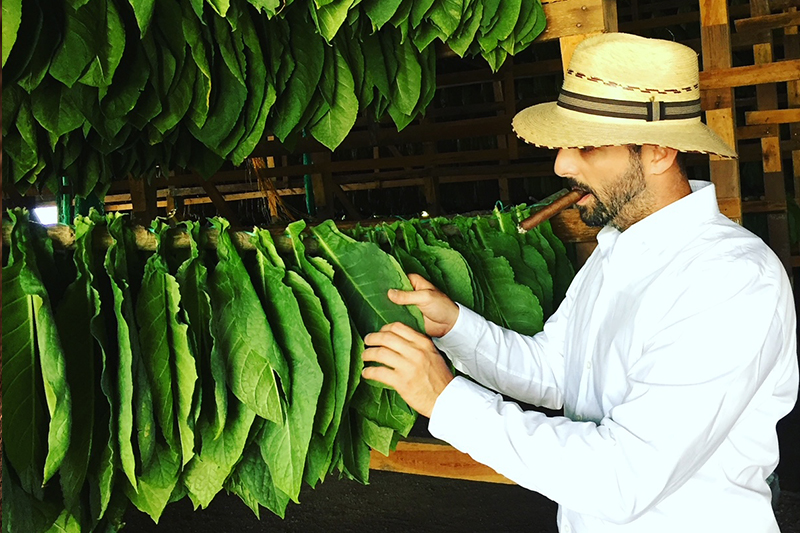 In 1971, the Rodriguezes settled on the beautiful island of Key West, Florida, where they established the Rodriguez Cigar Factory. Founded in 1984, Rodriguez Cigars is the oldest cigar manufacturer located in the Florida Keys. As the years have passed, new generations of the Rodriguez family have joined the business and helped expand the manufacturing operations, and they still produce cigars that are made using the traditional Cuban manufacturing process.

Danny Difabio is one of the latest members of the Rodriguez family to continue the traditions that date back to the 1940s, when his grandmother’s side of the family began cultivating tobacco on La Finca de Carmencita. Difabio started working within the family’s cigar business after he graduated from college. At the time, he didn’t envision himself becoming involved in tobacco or cigars, but things changed as he learned more about the family’s history and the role tobacco played in it.

“I started to ask my grandparents questions. I wanted to know about our family history of tobacco in Cuba, and then as I was listening, I started falling in love. I fell in love with who we were and what my family was part of,” Difabio explains. “As a first-generation American on my mom’s side, I finally started to realize the sacrifices my family made by fleeing their home country to come to the U.S.A. simply to work hard and to provide for our family. This business was how my grandparents supported our family, and so I felt that it would be an honor to fill those shoes of sacrifice with love and respect. It resonated with me—to believe that I could keep the family business going and to pay tribute to my grandparents for making that sacrifice to allow generations after [them] to have a better life. I found my purpose.”

Difabio’s purpose is not that different from that of his grandparents, who were motivated to use their knowledge of growing tobacco in Cuban to build a cigar company and brand in the U.S. that could support and sustain a family. Rodriguez Cigars takes the Cuban traditions and combines them with the influences of the Florida Keys to create cigar blends that can be enjoyed and smoked for pleasure, relaxation and celebratory moments.

Making of the Blend
Rodriguez’s cigar blends appeal to a wide range of smokers, especially those looking for a quality product that was crafted using traditional Cuban techniques of blending and construction while pursuing refined characteristics in the flavor profile. Difabio confesses that it’s the blending process that he enjoys the most but that it is also the most challenging aspect of cigarmaking. When starting a new blend, Difabio first seeks out some inspiration. He looks for the meaning behind a blend by figuring out what to call it and how it relates to the family’s brand.

“I do not like to create a blend just to create one for our supporters; there has to be a purpose,” he says.
Secondly, Difabio brings members of the Rodriguez Cigars team together to decide what seed lines and primings the company wants to work with.

“Some seed lines and primings just don’t work well with others,” Difabio states. “For me, I like to personally use a lot of Corojo and Criollo fillers. I generally start off by smoking prototypes, just with different filler and binder combinations—no wrapper applied. I like to get an understanding of the anatomy of the blend right off the bat in terms of balance between strength and the complexity of the flavor profile we are pursuing. When you start throwing wrappers on these prototypes, the fun really starts! During this process we like to retrohale the smoke through our nose quite frequently so that we unlock the most important sense of taste: the nose. Now I feel like I’m in tune with the prototype. At this point, the cigar will speak to us. If we don’t like the balance between strength and complexity, we will simply go back to the drawing board and make various prototypes that could be the one we are after.”

For Difabio, finding “the one” sometimes occurs the moment a prototype is lit. “It’s indescribable. My immediate reaction when this happens is to smoke another one right after, and for like a week or two that’s all I will smoke because I want to make sure over time that the cigar will grow on me before we choose to take the next step.”

Part of the next stage involves figuring out how aging the cigars will affect the blend. Rodriguez Cigars typically lets its blends sit for a few months up to an entire year to make sure they hold up over time and that the company has enough raw materials in stock to continue producing the cigar consistently after its initial release. All during this time, Difabio and others at Rodriguez Cigars will periodically smoke the blend at different times to take note of how time and aging affects the blend. At the end of this process, Difabio and his team will know if it’s the right time to release the blend to the public, feeling confident that the blend has been properly developed and aged and that they will be able to keep making the cigar and supporting it for some time.

Some of those blends that have made it through this rigorous process include the Reserva Privada, Series 84, Series 84 Maduro, Primera Clase and the Vintage 1925 series. All of the blends use different tobacco from regions in Nicaragua, Ecuador, the Dominican Republic and the U.S. Each cigar line is blended to have its own unique characteristics and flavor profile. The Reserva Privada and Series 84 are great mild to medium-bodied cigars that are perfect for smoking during many outdoor activities, from a day spent lounging by the pool or while on the water fishing. Both of these blends are what Difabio describes as being “very comfortable blends that are full of flavor and very smooth.”

The Series 84 Maduro and the Primera Clase collections—two blends that are personal favorites of Difabio—are medium to medium-full-bodied blends that are perfect for late evenings after having dinner. Both the Series 84 Maduro and the Primera Clase blends use exclusive raw material and undergo a longer aging process called “fortaleza fina, which is Spanish for “fine strength.” These blends have a characteristic Difabio is constantly pursuing with his blends: a balance of strength and a complex mix of rich dessert-like textures that include cocoa coffees, baking spices and nuttiness.

The Vintage 1925 Series has great significance to Difabio because it’s the blend that his grandparents started making in 1984 and one that Rodriguez Cigars continues to manufacture to this day at its factory in Key West. This cigar is offered in two sizes, a Panetela and a cigarillo. Both sizes of Vintage 1925 are made with a combination of Dominican and Nicaraguan fillers and have two different wrapper options: an Ecuadorian Habano or Connecticut. This particular blend is best enjoyed in the morning with a cup of coffee, Difabio explains.

In the Club
The one thing Difabio wants consumers to understand about Rodriguez Cigars is that its products are manufactured with the principles that have served as the foundation of the company for years: love, family and respect. More cigar smokers are starting to discover Rodriguez Cigars with the help of partnerships like the one the company has with CigarClub, a monthly subscription box company. Difabio met Dave Imber a few years back through mutual friends, before Imber worked with CigarClub. Now, with Imber being CigarClub’s vice president, both men are working together to bring quality cigars to cigar smokers around the world in their own way.

“CigarClub has been exceptional because we are always on the same page regarding new projects and flavor profiles that we enjoy,” says Difabio. “I mean, when I smoke with Dave and Jeff [Zeiders], it’s refreshing because they indulge in the art of this process, and that’s what makes CigarClub’s subscription so unique! They always offer cigars from many great brands in the industry and pursue exceptional flavor profiles. The opportunity they gave us is something special because the amount of people they reach with their subscriptions has given us a lot of exposure, and that’s something we will be forever grateful for. Plus, Jeff and Dave are two exceptional individuals that take a lot of pride in their work, and it shows!”

In March 2021, Rodriguez Cigars and CigarClub collaborated on a limited edition release called Familia. Aged for a year, Familia was a medium to full-bodied cigar with a Nicaraguan Habano Maduro wrapper, Nicaraguan Corojo ’99 filler and a Nicaraguan Triple Ligero binder. CigarClub blended this cigar with the help and guidance of Difabio, who helped them create a rich, chocolatey, leathery, peppery smoke. The cigar sold out in a matter of days, setting the stage for a follow-up sometime in the future. In the meantime, Difabio has a very simple request for those that have yet to smoke a Rodriguez Cigar: Grab one, open a bottle of your favorite spirit, cut, light, and enjoy the moment and experience a cigar brand that has been blended with generations of love and dedication to tobacco and cigarmaking.

This story first appeared in the CigarClub Sponsored issue of Cigars & Leisure magazine that can be accessed by clicking here.