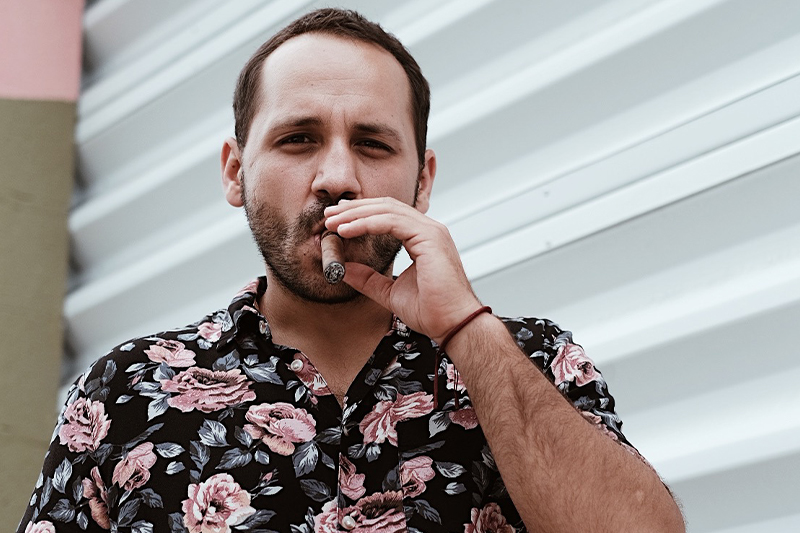 During the 1980s and early 1990s, Anthony Serino owned a small chain of video rental stores in South Florida. During this time, Anthony often visited all of Miami’s cigar hotspots and developed a love and passion for cigars that he eventually turned into a business after selling his video chain. Anthony began curating and processing his favorite blends from the area in and around the Miami area for his family and friends, and in 1996, he started crafting his own blends and opened his own cigar retail store. Later on, Anthony created APS Distributors, a new business that distributes cigars all over the world.
Anthony’s love for cigars is one he shares with his son, Carson. Carson smoked his first cigar when he was just 13 years old while on a trip in the Caribbean, visiting cigar factories alongside his father. This first cigar experience was not one that Carson enjoyed, and it wasn’t until he was 18 years old and working in his father’s retail store that he developed his own appreciation for fine cigars. Carson has many interests and hobbies outside of cigar blending, but in some way, cigars are always on his mind.

As a student of cigarmaking, Carson considers sampling other companies’ cigars a hobby and necessary part of the job. When he’s not obsessing over cigars, he’s either getting in a game of golf, studying design or making and/or playing music. Today, Carson serves as vice president of Serino Cigars, where in addition to sales and building hype for the brands he also is heavily involved in helping to create the various blends for his company’s various cigar lines.

Cigar smokers looking for well-fermented tobacco blended with a meticulous prowess will enjoy what Serino Cigars has to offer. While the company makes cigars for everyone, it is cigar enthusiasts between the ages of 25 and 55 that appear to gravitate toward the brand the most. A common theme in Serino Cigars’ various premium cigar blends is the use of great aged tobacco and the balance and complexity experienced in each cigar.

Consistency Speaks
The Serino Cigars brand, which formally launched in 2015, is a culmination of experiences the Serino family gained from distributing other cigar brands and what they learned through working in retail.

“The main impetus for Serino Cigars is to combine all of the blending and branding knowledge we’ve acquired over the years to create a world-class cigar brand,” Carson states.

Serino Cigars faced the same challenges that many new cigar brands do when they first launch. With so many cigar brands on the market in 2015, the Serino family had to build brand awareness, foster trust among retailers and gain shelf space, all in a short amount of time.
“How did we overcome this? We firmly believe quality and consistency always speaks for itself. We knew that if we put our best foot forward every day that cigar enthusiasts would take notice,” says Carson. “After many accolades and happy customers, I believe we’ve earned the trust of the cigar community. We don’t take our customers’ trust for granted. Our main priority now is to embolden that trust with future projects for years to come.”

For the Serino family, cigars are not only a business but also a foundation for a community. According to Carson, his whole family enjoys sharing the cigars it makes with friends and building new relationships with the help of tobacco. Visiting different cigar shops to share the various Serino cigars with other cigar enthusiasts and developing friendships along the way is just one of the perks of the job, says Carson. Even though Carson and his father may have different approaches to blending or business in general, they share the same common goals of focusing their attention and efforts on Serino’s products and on their customers’ experience.

“We both bring traits to the table that I believe complement each other in a harmonious fashion. Dad has a strong business foundation, and I specialize in branding, but we both have a knack for blending,” says Carson.

Carson’s time working in a fine dining restaurant helped him develop his palate. While attending college, Carson worked full time in a restaurant where he learned the importance of being able to describe flavor profiles. This experience carried over into his work in blending cigars. He often tells other cigar smokers to try to draw parallels to flavors they are familiar with. The more flavors they know, the better. When he tries new foods, wines and other spirits, he tries to take note of the characteristics of that experience so that he can add to his overall flavor terminology. This especially came in handy as he worked with his father to develop various Serino blends like the Wayfarer.

The Cigars
Serino Cigars’ products are currently made at the La Corona Factory located in Estelí, Nicaragua. Carson and his father Anthony have a methodical approach to blending cigars. First, they take into consideration the brand they are trying to create and go to work trying to craft a profile that will pair well with the branding. When creating the blend, there are several key characteristics that take center stage: body, strength, balance, complexity and how the cigar’s aroma will smell in the room.

“After we figure that out, we start working with aged tobaccos that will bring our vision to fruition,” Carson explains. “Once the blend of tobaccos, ratio and vitolas are finalized, we keep working and testing the blend until we are 100 percent confident that it’s ready for production. After production, we then age the blend for a minimum of
six months.”

Serino Cigars currently has five different offerings: Wayfarer and Taino, as well as the Serino Royale, which comes in three different blend options, the Royale Connecticut, Royale Medio and the Royale Maduro XX. The Wayfarer is a medium-bodied Corojo ’99 blended in a traditional Cuban manner that places emphasis on both balance and complexity with a peppery finish. The Wayfarer has a special significance to Carson as it was the first cigar he helped create. The blend was inspired by his travels in Europe. While traveling, Carson sampled a variety of Cuban blends and returned home determined to create a blend that would serve as a documentation of the cigars he smoked during that trip.

“The Wayfarer blend really emphasizes what I look for in cigars: balanced and complex yet full-flavored,” he explains.

Taino is a Habano Medio blend that pays homage to the indigenous people of the Caribbean that many tobacco historians say are responsible for creating the first cigar. Taino is a medium-bodied blend that is easy on the palate but rich in flavor and offers nuanced transitions. The Royale Connecticut is what is described as a different take on the traditional Connecticut. It’s a bit stronger and richer than most Connecticut cigars, but it still offers the expected elegance and smoothness that most cigar enthusiasts have come to expect. The Royale Medio is what Serino Cigar Co. calls a “fun and unique blend.” It’s a medium-bodied Habano Medio blend that offers cigar smokers a robust chocolate richness throughout. The Royale Maduro XX is Anthony’s favorite blend out of all that Serino Cigar Co. has to offer. It’s a Havana 2000 Oscuro blend defined by its dark cocoa strength that maintains its overall balance throughout the smoking experience.

Part of the Club
Carson and his family have built a cigar brand that has made quality and customers their top priorities. There isn’t a Serino-produced cigar sold that Carson and his father wouldn’t regularly smoke themselves. “We view cigar smoking as an experience that is meant to be shared, enjoyed amongst family and friends,” says Carson. That’s the big payoff for us—to share the fruits of our labor with the people we care about after all the hard work we’ve put into our company and its cigars.”

Getting more people to add Serino Cigars to their portfolio is always a goal, and it’s one that’s been made a bit easier with the help of CigarClub, which often includes Serino Cigars in its monthly subscription box. CigarClub has provided Serino Cigars with exposure to many enthusiasts and hobbyists that may not have tried the product otherwise.

“Dave [Imber] and the CigarClub team are fantastic to work with,” Carson proclaims. “Dave prioritizes branding and quality as much as we do. Both of our company’s values synergistically align. I’m always confident that his monthly boxes are first-class curations of what’s hot in the market. From a brand positioning standpoint, we couldn’t ask for a better monthly subscription service to showcase our blends. We’ve also had the pleasure of digging into the creative side with Dave to develop private brands exclusively available to CigarClub members and have many more to come!”

For those that have yet to smoke a Serino Cigar, Carson has a simple request: When you try any Serino cigar, pay attention to the details of that cigar. “We believe that a superior experience lies in the fine details. We are meticulous in the way we ferment and age our tobacco, the way we roll our cigars and the way we present them to the customer. World-class execution is a priority in each phase of product development. I’m confident that your first Serino Cigar won’t be your last.”

Carson and his family spent 2020 rolling up their sleeves and working on many new projects that will begin to debut this year. In addition to launching a brand new website (serinocigars.com), Serino Cigars has many new brands, line extensions and exclusives that will be released through CigarClub in the coming months. If you are not yet smoking Serino Cigars, now is as good of a time as any to add them to your humidor as a regular rotation.

This story first appeared in the CigarClub Sponsored issue of Cigars & Leisure magazine that can be accessed by clicking here.

A Seasonal Favorite from Alec Bradley Slated to Return in 2022