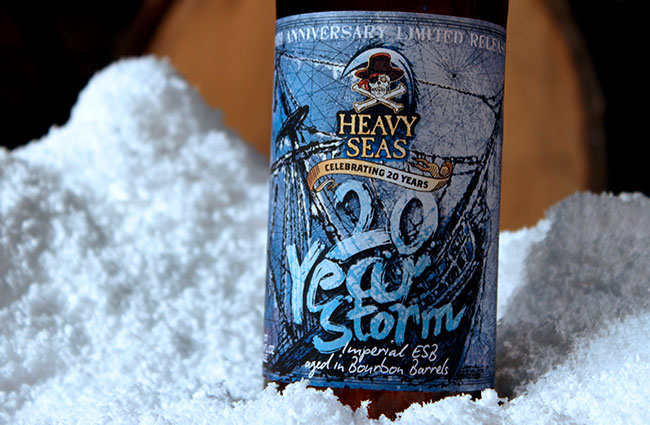 On Dec. 8, 2015, Heavy Seas Beer will celebrate its 20th year of brewing craft beer in Baltimore. To mark the occasion, the brewery will release a special anniversary ale and host a series of events in Baltimore and other markets.

The first beer released under the Heavy Seas brand was Winter Storm, an imperial ESB with an American twist. In celebration of the 20th anniversary, a stronger 10% ABV, barrel-aged version of that first beer was created. 20 Year Storm is an Imperial ESB brewed with imported UK malt, local Domino brown sugar, a powerful English ale yeast and a blend of American and British hops (making up 70 IBUs). Post-fermentation, the beer was aged in bourbon barrels for approximately 75 days.

ANNIVERSARY EVENTS
20 Year Storm will officially be launched at the Heavy Seas Alehouse in Baltimore on Dec. 7 from 6 p.m.-12 a.m. This event will also feature throwback menu items from Sission’s. On Dec. 8, a memorable anniversary event, “20 Beers for 20 Years”, will be held at Ryleigh’s Oyster Federal Hill in Baltimore. Ryeligh’s will feature 20 different Heavy Seas beers, including 20 Year Storm, throughout the night. A VIP ticket option providing unlimited sampling will be available for purchase.

The official brewery release party for 20 Year Storm will take place Dec. 9 from 3 p.m.-10 p.m. at the Heavy Seas Tap Room in Baltimore. $2 of every pint sold during this event will be donated to Ocean Research Project, a non-profit organization based in Annapolis, MD, committed to serving the ocean research community and providing data that explores man’s relationship with the planet’s oceans. This event will not only celebrate Heavy Seas Beers’ anniversary but the entire Maryland craft beer industry.

There will be celebratory “20 Beers for 20 Years” events in other markets where Heavy Seas beer available. Venues to be announced soon:

For all the latest information from Heavy Seas Beer visit hsbeer.com.

For more beer, check out our 5 favorite chocolate beers, and British Beer Co!