Eons ago, there existed an elite group of chaos warriors who ravaged the galaxy with a boundless hatred of all things alive. They were called the Scumdogs of the Universe, and they grew in might and fury. … But they became too powerful, and too defiant. For their cosmic crimes, they were banished to the most insignificant planet in the universe … the seething mudball known as Earth. Millions of years passed, and they slumbered, until the pollution of your world thawed these creatures from their ageless coma … and now they stride the Earth, living gods, dedicated to one goal, the destruction of the human race, and the eradication of existence itself! Wait—that’s two goals!

The history of GWAR, from their website gwar.net, tells us all we need to know about these rock gods: They’re here to conquer. And that’s not even mentioning how they conquered the charts with their 13 studio albums over their 30-year history, with many of the original members still part of the band.

Over the years these shock-rocker aliens, who now call a secret fortress in Virginia home, even managed to turn GWAR into a lifestyle with festivals and their own lines of beer, barbecue sauce and vodka, as well as the one we were most excited to talk about: cigars.

I had the privilege of catching one of their shows this summer at Vans Warped Tour in Charlotte, North Carolina, having never seen them perform live. I didn’t realize I was about to witness a stage show so insane that it would make even Alice Cooper blush (but maybe not Ozzy Osbourne).

From the moment GWAR stalked onto the stage and hit the first guitar riff, the mayhem had already begun. A “fight” ensued onstage as fake blood sprayed all over the crowd throughout the duration of the first song. The crowd loved it, and those in the middle pushed toward the front to try to get some of the red dye on them, too.

Over the next hour, gallons of fake blood sprayed across the crowd, and by the end of their set, it did indeed look as if a battle with aliens had occurred—because it had … and GWAR had prevailed.

These guys know how to put on an incredible show while simultaneously playing some of the best heavy metal of the last few decades. I had survived their conquest, but equally impressive, if I do say so myself, was that I survived an interview with GWAR’s drummer, JiZMak da Gusha, who remained in character throughout the interview, just a few hours before the show.

JiZMak and I talked about what playing at Vans Warped Tour is like, whether conquering earth is fun, and then discussed GWAR’s cigar line, ciGWARs. But most importantly, JiZMak allowed me to bring this interview back. 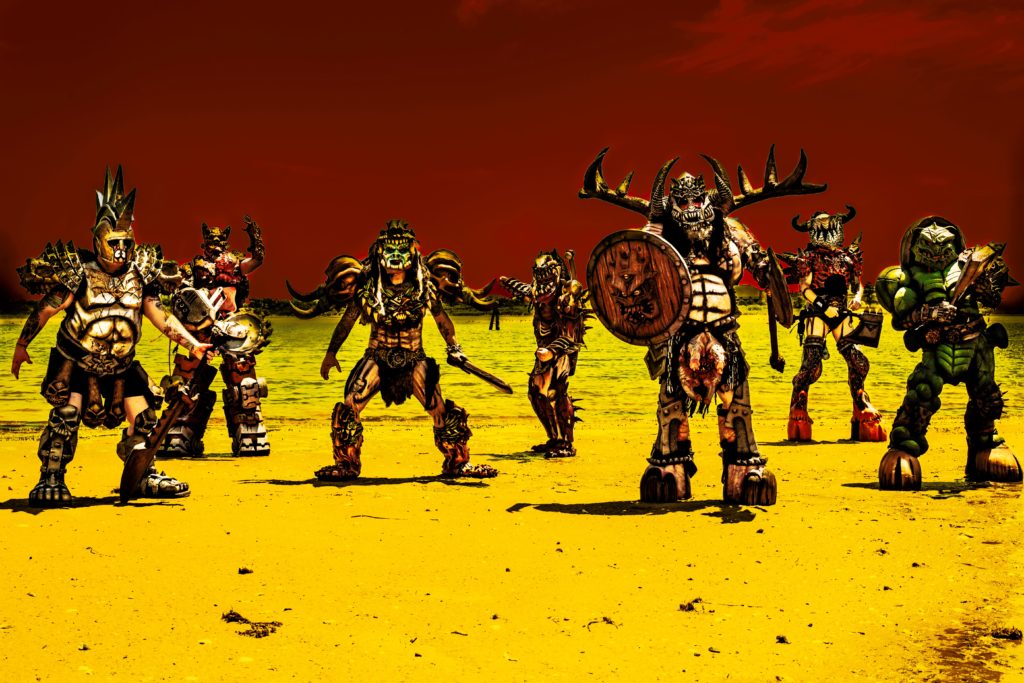 Cigars & Leisure: Tell us about your line of cigars called ciGWARs.
JiZMak: We have this festival we put on every year called the GWAR B-Q, where we have GWAR beer, GWAR vodka, and GWAR barbecue sauce. We have all these things that are geared toward the festival, and cigars were just a natural fit. I connected with Pete Johnson from Tatuaje Cigars and immediately found out we were two like-minded guys. Pete was like, “Yeah, I’ll make you a stick.” Sure enough, he made one with a box and a label. They were really good smokes, but I was thinking it would just be a one-shot production. But now we have two blends that people really enjoy. I’d love to do a new one every year.

I can’t get my hands on one here?
No, you can’t. They’re only sold at the festival and certain locations in Richmond, Virginia, where GWAR’s fortress is.

What’s your favorite cigar?
CiGWARs is pretty good, but I’ll smoke anything that’s a maduro. I like cigars that are similar to GWAR’s conquest of Earth. When GWAR takes over the earth, it starts with fire. It’s very pleasurable, and then it ends in ashes. Cigars and GWAR go together perfectly. 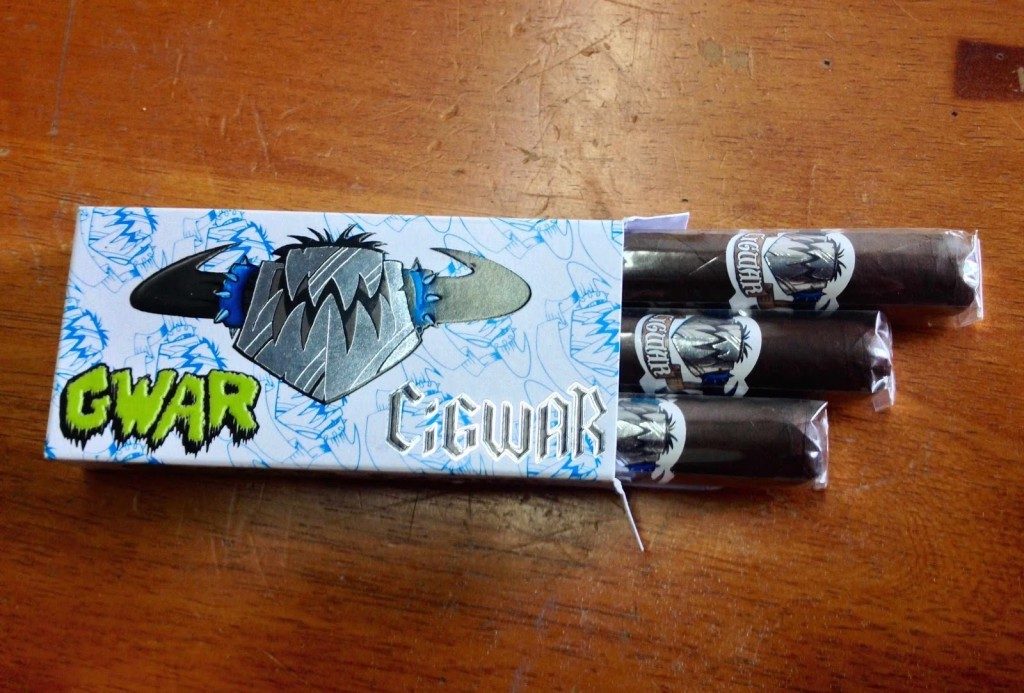 What was it that first drew you to cigars?
It wasn’t really a childhood thing. It was more as I got older and you realize you just want some peace and quiet. A cigar is for when you have time and leisure. It’s not like I’m going outside and jamming out a cigarette. It’s perfect for social situations and just hanging out. I had some buddies that smoked and would tell me [to] try certain cigars, and the next thing you know I would smoke every six months, and then once a month, and now I smoke one a day.

Do you have a favorite drink to go with a cigar?
Yeah, it’s always bourbon. Bourbon on the rocks with a cigar. That’s my thing. Give it your all on the stage, and when the conquest is all over and you’re looking at the aftermath of the ashes piled up around you, then it’s time for some bourbon.

What’s it like on Vans Warped Tour with all these young’uns? Do any of the other bands smoke cigars with you guys?
GWAR is an old fixture in the music industry, so we’re here to do what GWAR always does—dominate the planet. And if we need to conquer younger people, then Warped Tour is the best place to find them. That’s why we’re here. As far as cigars go, you don’t see a lot of it here, but I don’t care. I’ll smoke in the crowd; I’ll smoke wherever I want.

Do you still love what you do?
Yeah, JiZMak loves playing music. He loves conquering humans; he loves smoking cigars while drinking bourbon. That’s just his thing. You can’t deny the pleasure of someone still paying you to play music for a lot of years. That is still amazing to me. Any chance you get to do what you like to do and get paid to do it, you have to keep doing that. 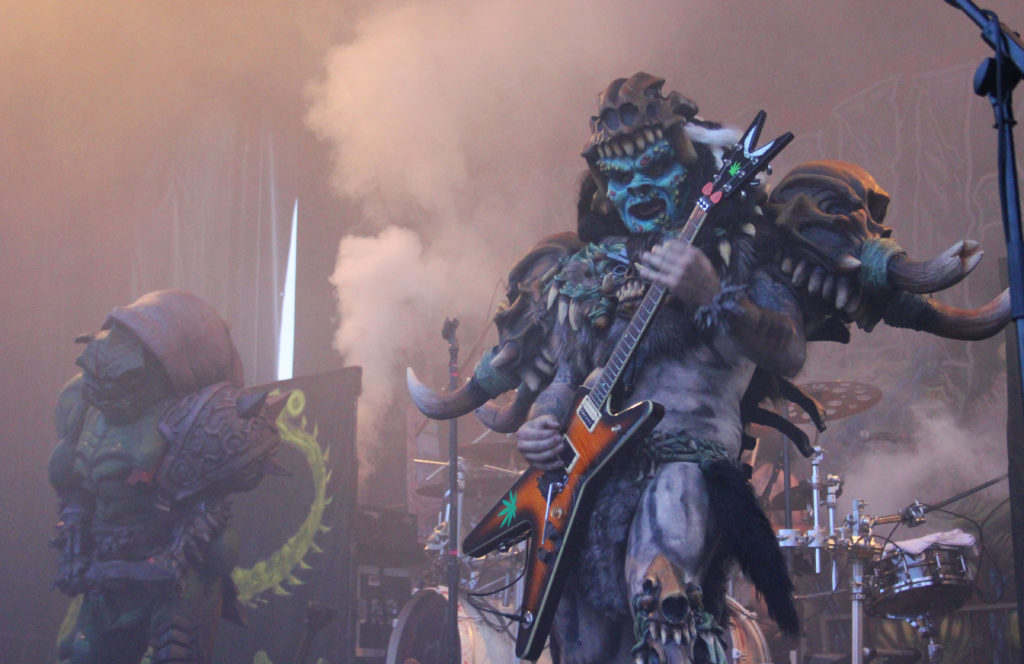 If all this went away and GWAR finally got conquered, what would you want to do?
I’m doing the dream job. There’s a thousand things you could think of to do, and you can’t accomplish them all in a lifetime, so you might as well pick a good one and put everything into that. I’ll keep doing this as long as the body holds out. Yeah, let’s do it. I think the world needs GWAR. It has to have a band like this, and the world wouldn’t be the same without it. GWAR will probably go on even after I’m gone. GWAR’s just one of those things. It will keep going.

You’ve been with GWAR since almost the very beginning. How many of the guys are original members?
BälSäc the Jaws ‘o Death, he’s an original. Then there’s Blothar, but the secret is that he used to be the original Beefcake the Mighty, our original bass player, and now he’s come back as our vocalist. Then there’s Sawborg Destructo, GWAR’s enemy, and Bonesnapper, the cave troll, GWAR’s pet. Those two have been around for a long time, ever since GWAR became a full-fledged working band and it wasn’t an art school project.

Dave Brockie, GWAR’S original singer, met Hunter Jackson, who was making a movie, while in college. Dave had a band, so they fused the two together, and that’s what started GWAR. After college, it took off, and GWAR was doing more than the movie thing. For the full version of our story, GWAR has a coffee table book out called Let There Be GWAR, which is amazing. There’s stuff in there I lived that I don’t remember. I read it, and I was really surprised what happened to me. When we were younger we used to take a lot of LSD and play shows; we did that a bunch. That was not good. They may have been the greatest bar shows ever though; I don’t know. I don’t remember.

Do you have a memorable band you’ve toured with?
There are tons of great bands: DevilDriver, All That Remains, the Dickies, and all the local bands that have come out of Richmond. We put Lamb of God on the map; they all started opening for a GWAR tour. They’re good friends.

You’ve been all over while touring. What’s one of your favorite venues?
Some that really stick out are the ones close to home, like the 9:30 Club in D.C. That’s close to where GWAR is located, the secret fortress in Richmond. There are great venues all over the world, though. Great places in Australia [and] Europe, but the hometown venues always have a special place. We’ve probably played the 9:30 Club more times than any band ever has. I think we’re one of the top 10 bands who have played there the most, and I’m pretty sure GWAR is in their new coffee table book about the history of the 9:30 Club.

How many shows do you think it’s been?
Probably 28 or 30? We’re there at least once or twice a year.

Let’s keep going with these favorite questions. Do you have a favorite country you’ve played in?
Japan is like going to a foreign planet. It’s always really cool and an amazing experience. I love Australia. The Eastern Hemisphere is really rad. I have great times wherever we play, and there are still some places where I haven’t been yet. I really want to get to South America. It’s just tough to get all our stuff there. We’re not just a band that can carry a few guitars on a plane.

Very true. How about a favorite state?
I’ll tell you where I don’t like to travel to: Cleveland. That place sucks. It’s the armpit of America [Editor’s note: Sorry, Cleveland]. But I think that one city that always gets a bad rap is Detroit. Everybody is like, “Ahhh, Detroit!” But I’m like, “No, Detroit is the greatest.” It basically invented music. It invented cars, invented the Industrial Revolution. What more could America want? Every city in America should say thank you to Detroit.

You’ve done a lot of crazy things on stage. Do you have a craziest?
See us live and find out. GWAR’s got some crazy stuff. It’s crazier now than it’s ever been. You can’t even list the amount of atrocities that GWAR has put on the stage in front of human beings—and that’s just on the stage. 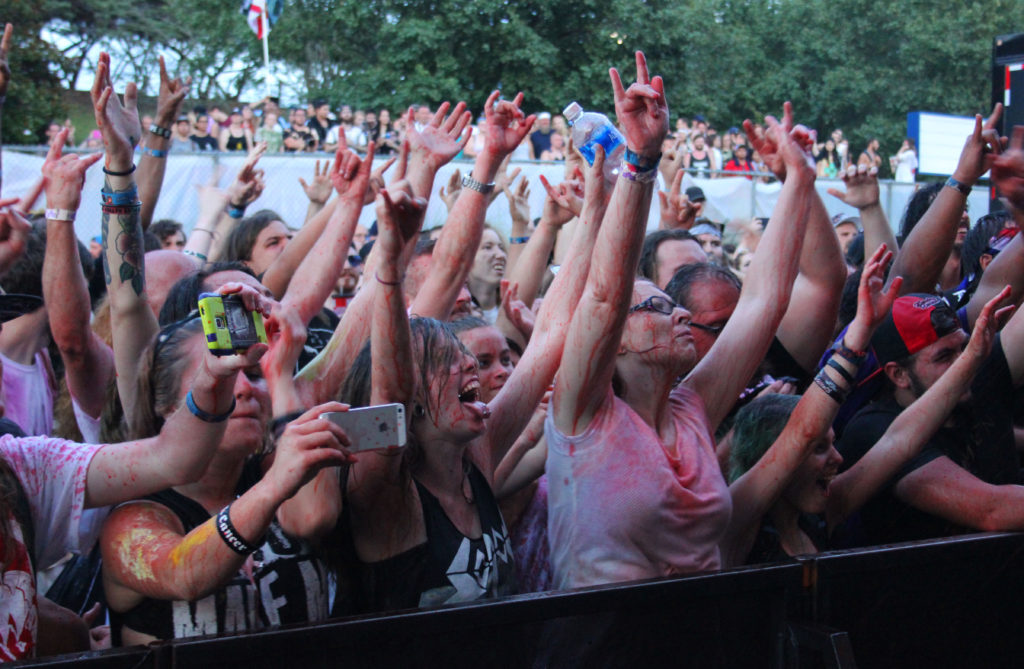 If someone is experiencing GWAR for the first time, what can they expect from your show?
Minds burned to a crisp. When you see GWAR hit the stage, the thunderous music will completely grab your soul and make you a mindless minion to our cause of destroying the planet. We thought we were going to get the chance to destroy the world, but you humans are doing a pretty good job of it. We’ve fallen behind, so we’re here to get back in the lead. We want to be king of the heap. The human race is so awful now that they’ve taken the throne from us. We’re here to get it back.

Other than taking your throne back, what’s next?
GWAR has a new record coming out this fall, followed by another massive world tour of conquering and wrecking cities. We’re pretty excited because this record is definitely a departure from previous ones. You’re going to get something new that you haven’t seen before, plus Blothar, our new singer, does an amazing job. I think people are really going to dig it. And if the people don’t dig it, well, we’re just going to destroy them anyway.

For more information about their records and where you can witness GWAR’s destruction of humanity in person, visit gwar.net.

If you like this, check out our list of the craziest maniacs of the stage.
Promo shots by Rachel Naomi / rachelnaomiphotography.com 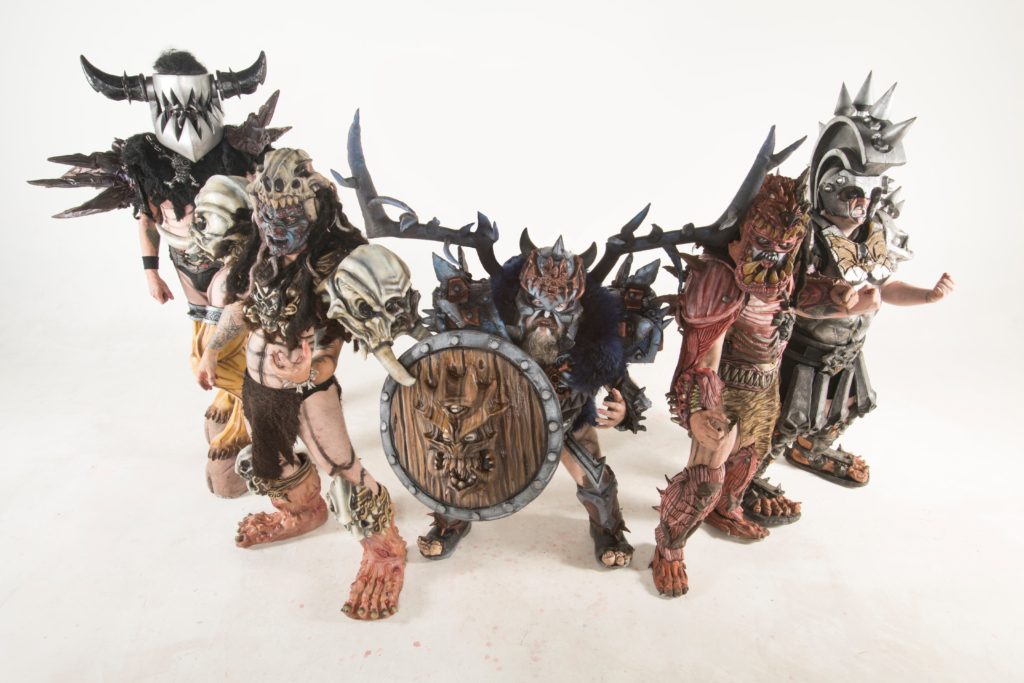