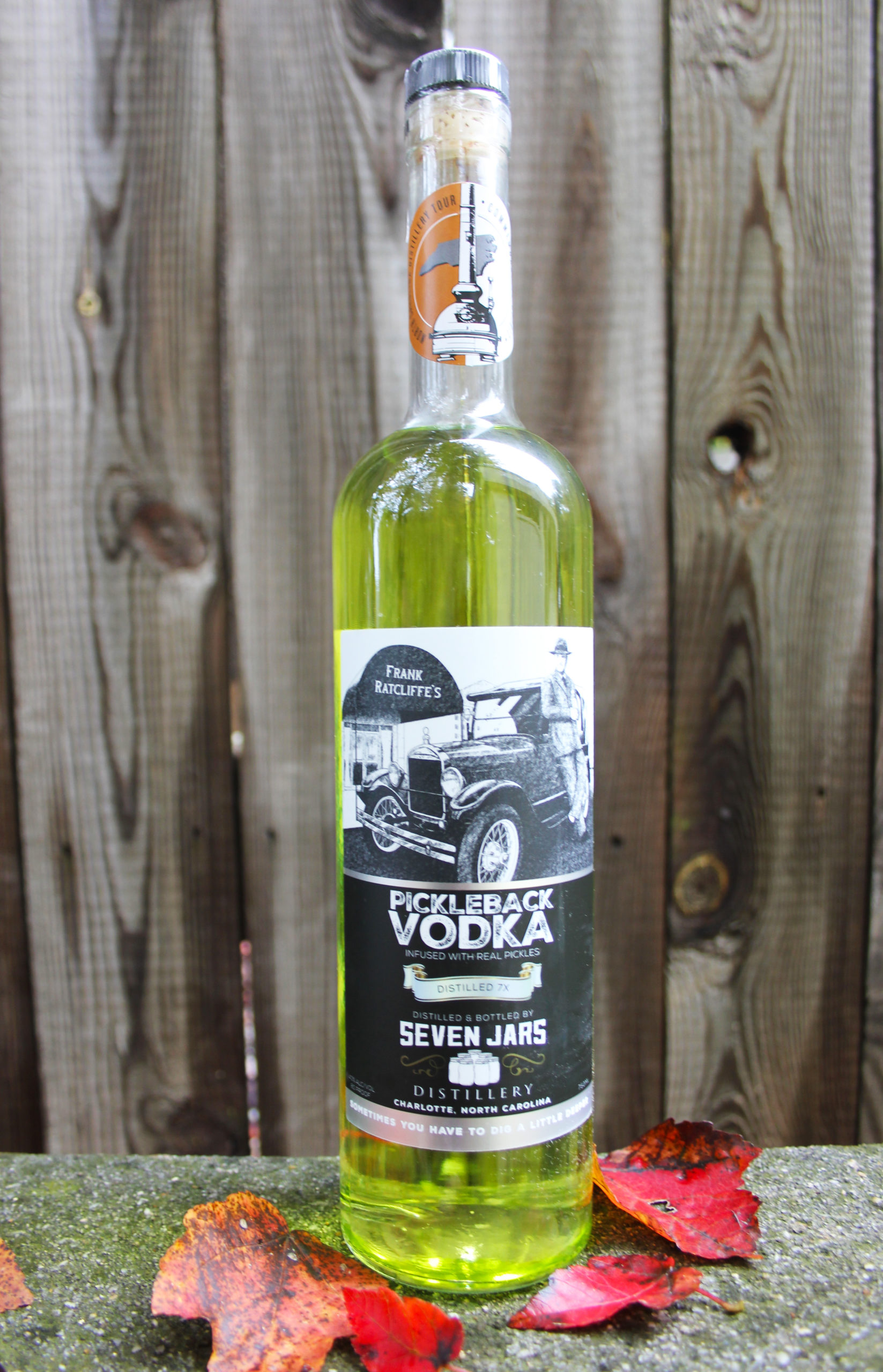 Flavored vodkas have a bit of a bad rap, which is partly deserved to be sure. When I think of flavored vodkas, I usually imagine a group of inebriated ladies at the tail end of a bachelorette party stumbling around a seedy bar doing shots of watermelon vodka. I picture this because I used to bartend, and it happened all the time.

The infused-vodka flavors are numerous: lemon, lime, blueberry, vanilla, tangerine, apple, peach, mango, orange, banana, and the list rambles on for as many fruits as there are. Subsequently, I have written off vodka as my liquor of choice unless I feel like downing something that tastes akin to strawberry cough syrup mixed with dirty rubbing alcohol. That is, until now.

I decided it was time to dip my toe back into the vodka pool and find something I might be able to stomach. I chose four vodkas that are local to the Carolinas (where our office is located)—three flavored and one not. I chose Bedlam Vodka, from Graybeard Distillery in Durham, North Carolina, as an unflavored vodka because they promise a smooth, drinkable spirit that won’t burn going down. It’s also won some awards, so I figured this was as good a place to start as any. 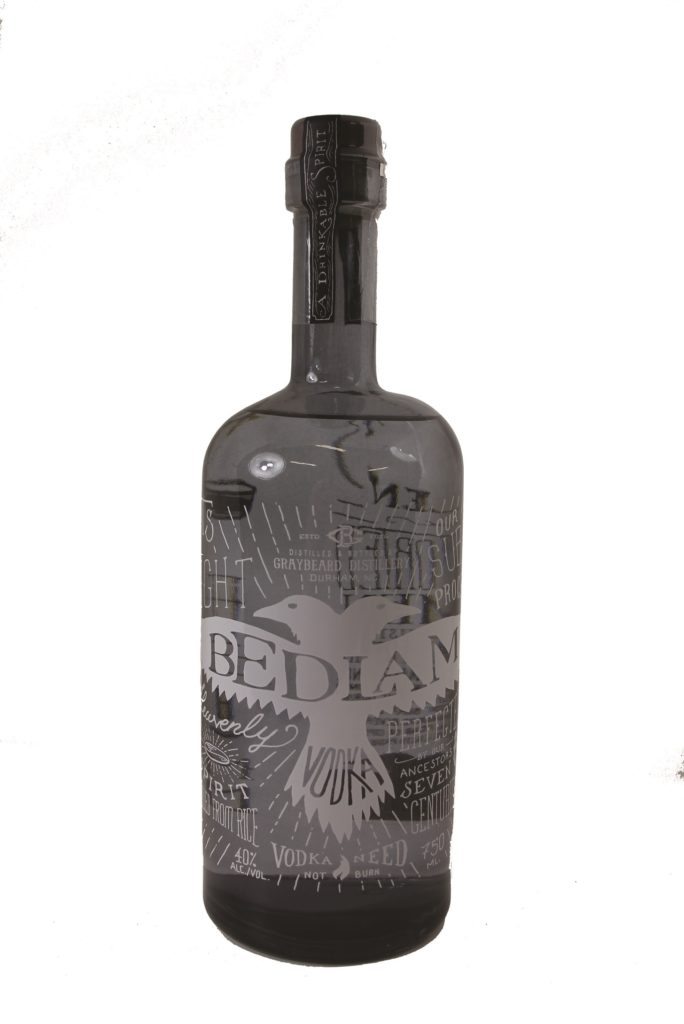 This quote, fixed on Bedlam Vodka’s, perfectly encapsulates Bedlam and my previous experiences with vodka. It gives me hope for the task ahead. The Bedlam logo, on the handsomely decorated bottle, is a double-headed raven that was apparently used as a stamp in the Irish bootlegging culture to mark contraband. I’m not usually one to judge a liquor based on the bottle alone, but damn, they did an excellent job. Quotable highlights on the bottle read “forged by noble monks” and “vodka need not burn” [Editor’s note: Amen].

First up: sipping it neat. The initial aroma smells smoother than usual vodka and less like fiery rubbing alcohol. It doesn’t assault the senses; it caresses your nose like a good bourbon would.

Holy vodka. This is smooth. I would never imagine in a million years drinking a vodka neat, but I can see myself doing just that and enjoying a cigar with Bedlam as well. The reason for the smooth quality of this vodka, according to one of Bedlam’s founders, Brandon Evans, is twofold. They use long-grain white rice, which has almost no impurities, lending itself to a pure distillate, and the second part is their distillation techniques (I could get into more of that, but we have lots more liquor to try and so few pages).

Next, I’m making a Moscow Mule, one of my favorite mixed drinks. I’m not being glib when I say this, but this is one of the smoothest, most delectable Moscow Mules I’ve ever had. The fizziness of the ginger beer is perfectly offset by the mellow tones of the vodka. I’ve previously tasted many a Moscow Mule that can best be described as harsh, but this one is anything but. 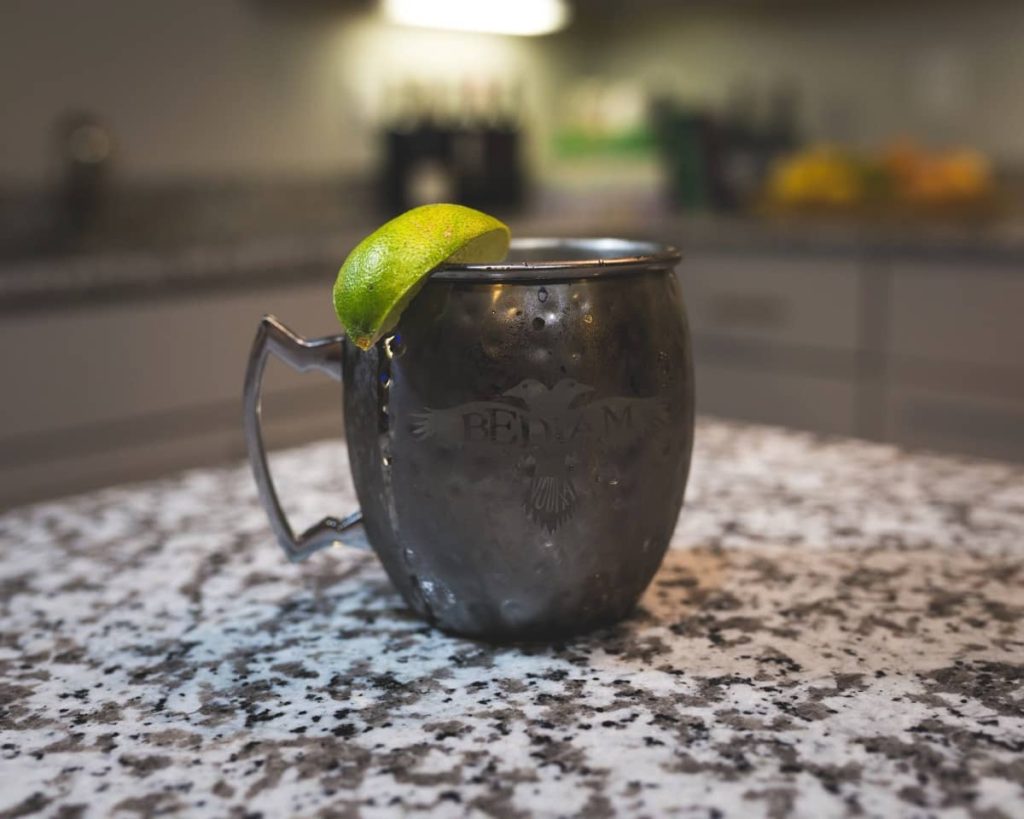 DIRECTIONS
Add vodka and lime juice to a copper mug loaded with ice. Stir and then top with ginger beer. Garnish with a lime wedge.

Moving on, it’s time to dive into the flavored vodkas. I found a distillery named Dixie Vodka in Charleston, South Carolina, that has what has been called the “South’s Best Tasting Vodka.” They have a couple of interesting flavors including black pepper and citrus, but I decided to go with a mint and wildflower honey. 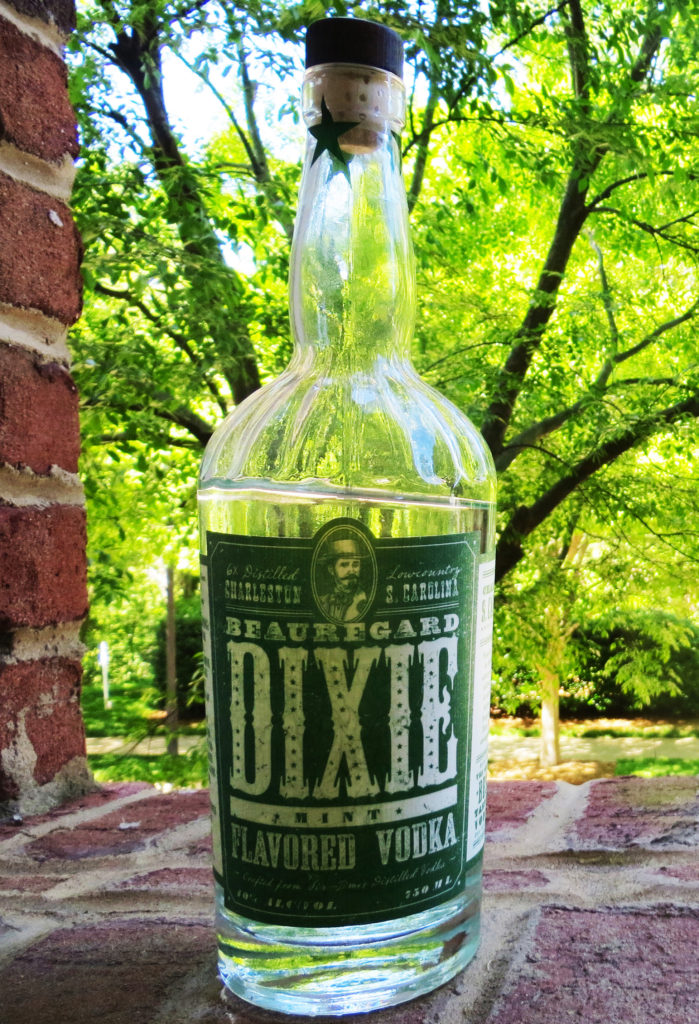 The Dixie Mint Vodka is blended with their core Southern Vodka and all-natural mint. It’s an award winner with a 93-point Gold Medal from the prestigious Beverage Testing Institute.

The minty taste is subtle, with just enough flavor to take the edge off when sipping it neat. I figured I should try mixing it with only lemonade first, and boy, was that an excellent choice. Again, that subtle minty freshness is all that lingers with this vodka, so it just tastes like you’re drinking mint lemonade, something I never tried before but absolutely love now. The minty and sour aroma is pleasant and instantly transports you to those long summer nights spent on a patio. 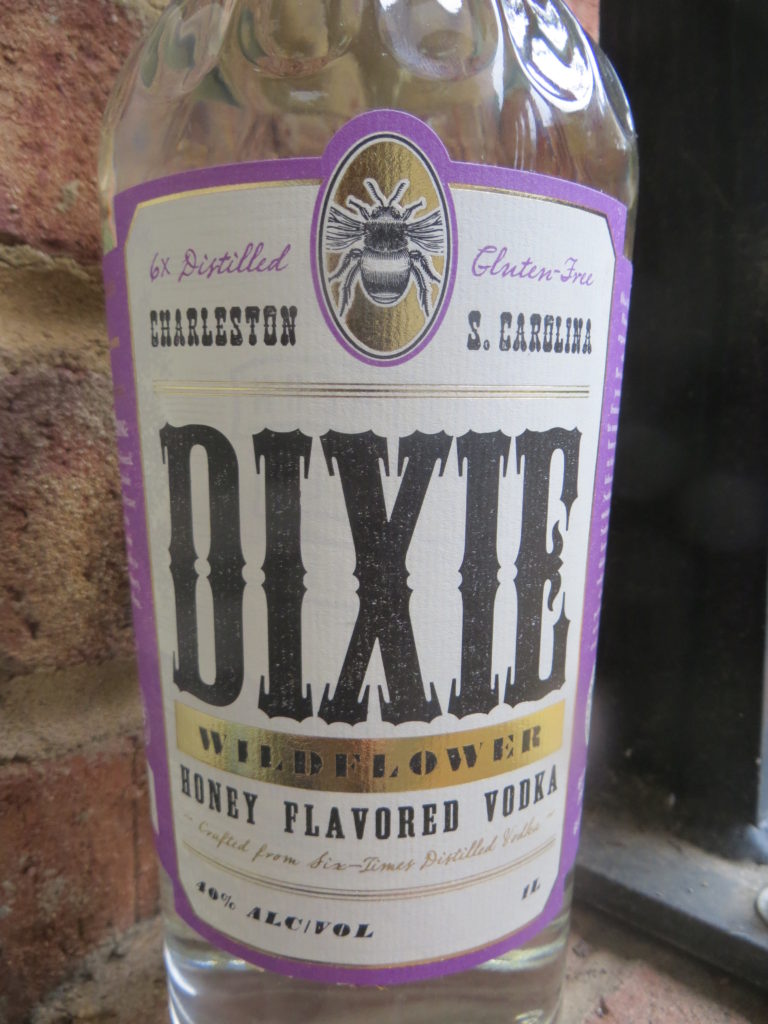 Next, let’s try the Wildflower Honey Vodka, a collaboration with Savannah Bee Company. It’s infused with Dixie’s core vodka and southeastern wildflower honey. I first sample it neat and am pleasantly surprised by the soft honey notes. It’s smooth, subtly sweet, and I’m surprised it works so well simply neat or on the rocks. What’s really cool about this pairing is that Dixie sent over a bottle of the wildflower honey with the vodka, and let me tell you, this honey is divine.

For a mixed drink I decided to mix up the Bee’s Elbows cocktail with Savannah Bee Company’s honey. The first time I make it, I do exactly what the recipe calls for, 3/4 ounces of lemon juice, but the lemon was way too overpowering and tart that I couldn’t even taste the sweet honey. I remade it and cut the lemon way down and this time loved the meshing of flavors. This is a delicious and summery cocktail; it tastes like a honey-flavored lemonade. It might not be the best for cold winter nights, but save this one for the summer! 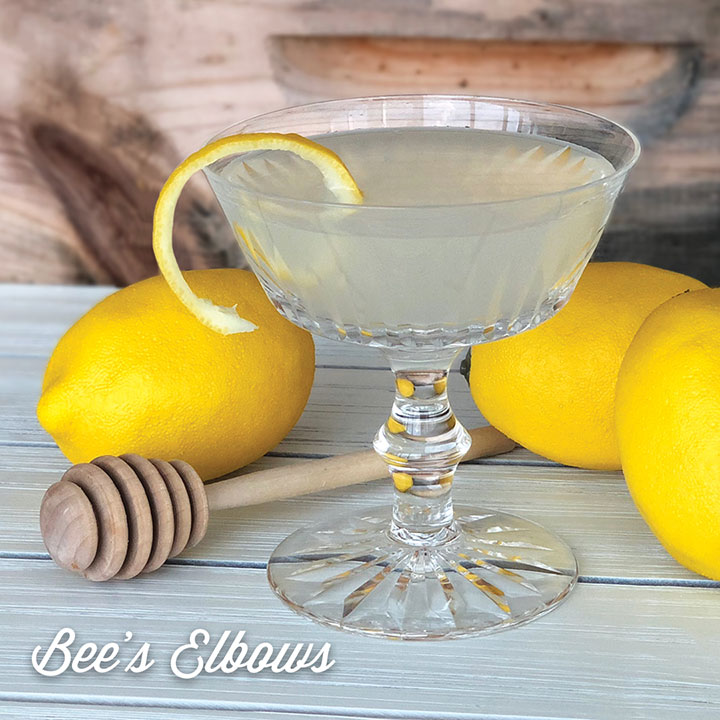 DIRECTIONS
In a cocktail shaker with ice, combine vodka, honey syrup, and lemon juice. Shake vigorously, and strain into a chilled cocktail glass. Garnish with a lemon twist.

*To make the honey syrup, combine equal parts honey and water in a small saucepan. Bring the mixture to a boil over medium-high heat, stirring constantly until the honey dissolves. Remove the saucepan from heat and allow it to cool to room temperature. Store the honey syrup in the refrigerator for up to two weeks in airtight container.

For the final vodka tasting, I saved the weirdest for last: pickle-flavored vodka. 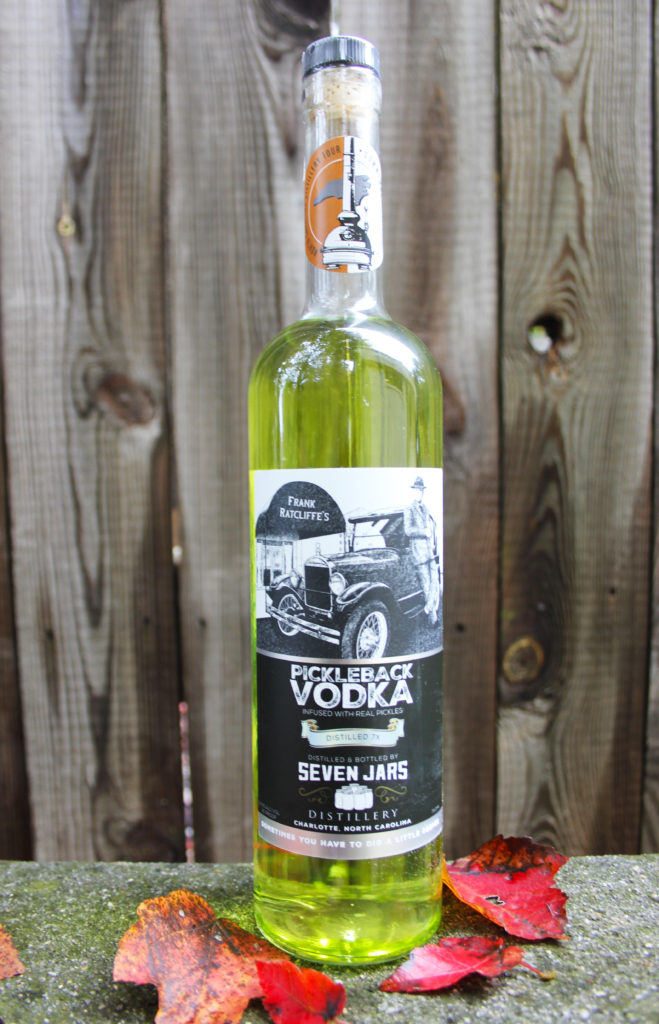 Seven Jars Distillery makes its home in Charlotte, North Carolina, and distills not only vodka, but also rum, whiskey, and they even have a winery! I’m always intrigued by liquors or beers that are a little different; it keeps things interesting. However, this may be one of the strangest I’ve ever had, yet I rather enjoyed it.

The distillery recommended making a Bloody Mary with this vodka, but I couldn’t do it. Even if it was the best Bloody Mary on the planet, I would still hate it. If you like Bloody Marys, I’m sure you’ll love it with the pickled vodka, but I went with a safer choice—pickled martini.

The pickle scent of this vodka is rather pleasant; it’s subtle. Sipping it tastes like smooth, fermented olive juice, which is not a bad thing. I enjoy the light green shade, too. This would make for a fun Halloween party cocktail.

I’m a lover of dirty martinis, so I’m very much looking forward to making this pickled martini. I mixed it with exactly what the recipe calls for below, and I would recommend bumping the olive juice down slightly. It tasted like the dirtiest dirty martini there ever was. If that’s your thing, if the thought of sipping pickle or olive juice gets you excited, then by all means, go for it. But for the rest of us, I recommend letting the pickled vodka speak more for itself than the olive juice. Once I remade it with less olive juice, I enjoyed it immensely, but I’m still cautioning you: This is a dirty, dirty martini.

DIRECTIONS
In a cocktail shaker, add ice, vodka, olive juice, and vermouth and shake vigorously until chilled. Strain into a martini glass and garnish with three olives.

For more info and recipes, visit sevenjarsdistillery.com. Check out our review of their Preamble Bourbon.

Congrats to Dixie, Seven Jars Distillery, and Bedlam for redeeming vodka for me. I may not be heading straight for Ciroc on the rocks as my go-to beverage, but I’ll certainly be giving vodkas a second thought. Or, I’ll just stick with my mint, honey, and pickle-flavored vodkas.

Best Ski Resorts in the Country