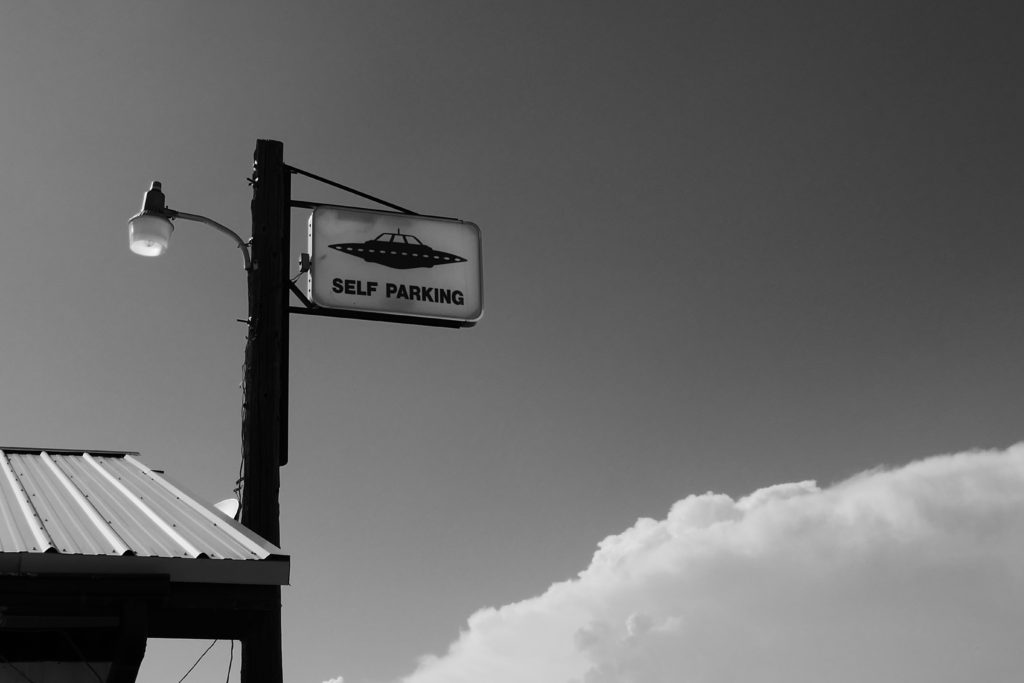 Because there are only so many times you can visit the same beach, ski the same slopes, or ride the same roller coasters, we went looking for some—let’s call them “unusual”—entertainment destinations. Here are five of our favorites: 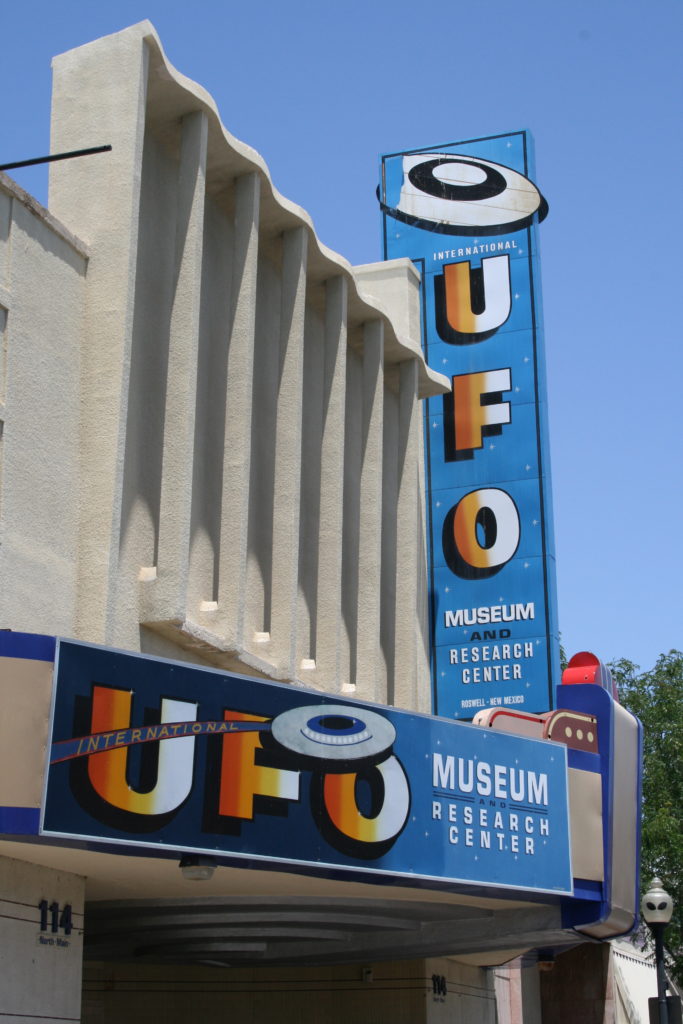 Our galaxy contains as many as 400 billion stars and more than 100 billion planets. So, what’s crazier to believe, that aliens exist or that our little planet is the only one in all of that supporting life? The real question is Have lifeforms from other planets visited Earth?

One of the more interesting cases involving alien visits revolves around Roswell, New Mexico, in 1947, when rancher Mac Brazel found a crash site with unusual debris on his property. After contacting authorities, the initial report said a UFO crashed, but the military quickly changed the story, saying it was a weather balloon—a lie that people accepted. Because so many parts of the story didn’t add up, however, people never forgot, and 30 years later, under more scrutiny and pressure, the military’s story was completely debunked.

Caught in a lie, the military declassified information and admitted the crashed object was designed to observe their nuclear tests, a story that people again accepted. But was that another lie? Many people believe there’s more to all this, and Roswell is playing to that crowd. The area is now home to the International UFO Museum and Research Center, Roswell Spacewalk, and alien-themed escape rooms—and everywhere you look and walk you’ll see “aliens.” The McDonald’s is shaped like a UFO, Arby’s carries a sign welcoming aliens, and even Walmart has paintings of aliens on its windows. Sure, it may seem a little silly—and it is very much a tourist trap—but it’s all so fun seeing a town embrace its weirdness with everyone getting involved. 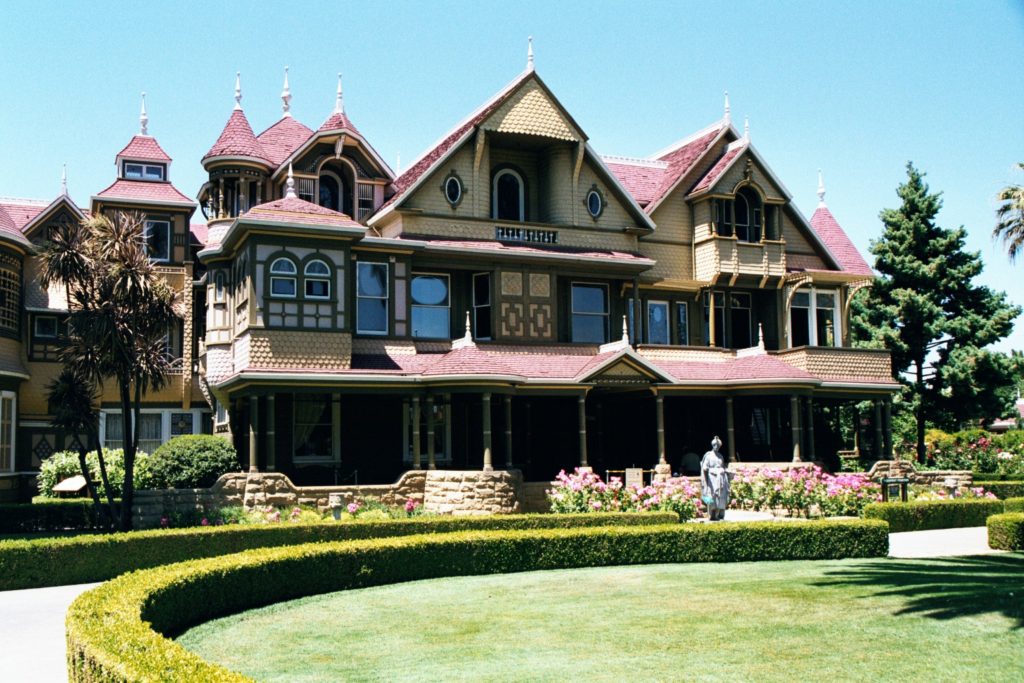 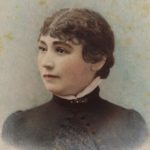 When Sarah Winchester moved from Connecticut to an unfinished farmhouse in San Jose, California, the one thing you can say for certain is that her bank account was in better shape than her mental health. After her husband, William, passed away in 1881, she inherited what would be the modern equivalent of $517 million, as well as half of the Winchester Repeating Arms Company, which paid her an additional $25,000 per day by today’s standards. So financially she was doing well. Mentally, though ….

She became convinced that her fortune was haunted by those killed with Winchester rifles and that only the continuous building of her new home would appease them. As a result, she had carpenters working on the house constantly until she died 38 years later. What was created was a seven-story mansion with 161 rooms, 40 bedrooms, 47 fireplaces, three elevators, two basements, and two ballrooms. It reportedly took 20,500 gallons of paint to cover the house.

What makes the house stand out, however, is not its sheer size. No architect was used, and because Winchester just wanted the build to continue, the mansion contains numerous random creations, such as staircases and doors that lead to nowhere, trapdoors, and some 10,000 windows. Just last year, a large, previously unknown room was found, containing a pipe organ and other treasures. Today the mansion is a museum that offers daily tours, although some tour guides refuse to be in certain places after dark because they’ve reportedly heard footsteps and whispers coming from empty hallways. Whether for the architecture, grandness, or ghost stories, the Winchester Mystery House is an interesting way to spend a few hours. 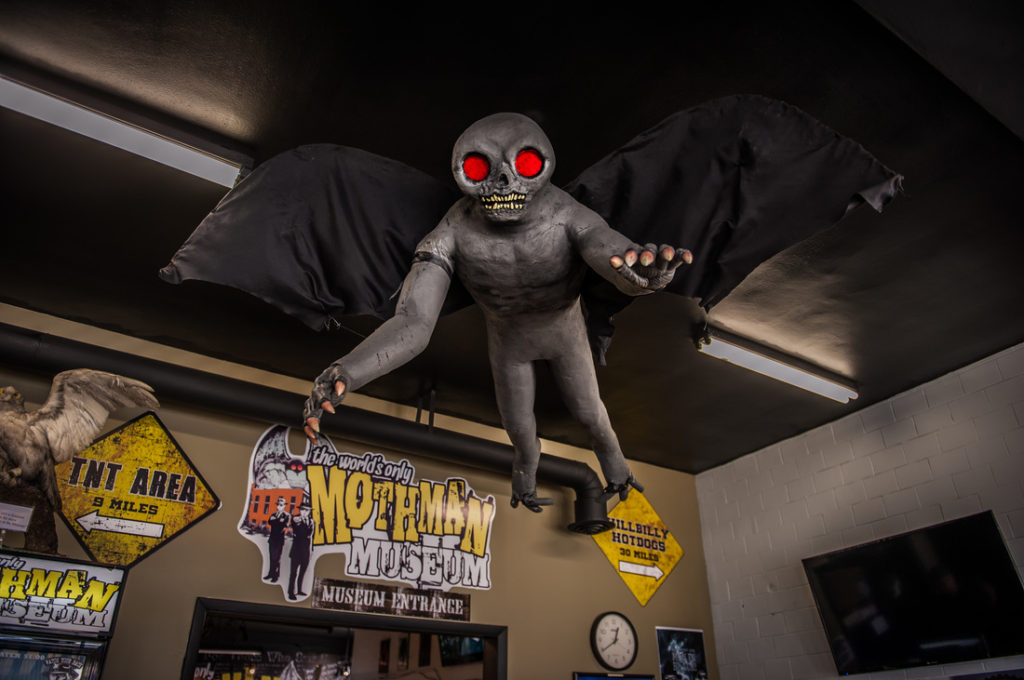 Located at the confluence of the Ohio and Kanawha rivers on the western border of West Virginia is the small town of Point Pleasant, a place with a history that includes names like George Washington, Chief Cornstalk, and what may have been (but probably wasn’t) the first battle of the Revolutionary War. It also includes the Mothman—a flying, man-like creature with 10-foot wings and glowing red eyes that precedes mayhem.

Beginning in 1966, more than 100 people reported seeing this creature. The legend expanded with the 1975 publishing of John Keel’s book The Mothman Prophecies and was renewed in 2002 with a Richard Gere movie by the same name. The creature is said to live in an abandoned TNT factory from World War II, and there was debate over whether Mothman was causing disasters or trying to save people from them.

The Mothman sightings were numerous around Point Pleasant leading up to a 1967 bridge collapse that killed 46 people. Since then, sightings of the creature have been reported around the world in times leading up to major disasters, including 9/11, Chernobyl, the Fukushima earthquake and resulting nuclear plant leaks, the I-35 bridge collapse in Minnesota, a mine collapse in Germany, and more. Of course, all these sightings tend to be reported after the disasters, so take them for what they are worth. Anyway, it’s still Point Pleasant that claims the creature, even building a 12-foot metallic statue in its honor. That’s in addition to a museum, a festival, and various smaller events all dedicated to this mysterious legend. 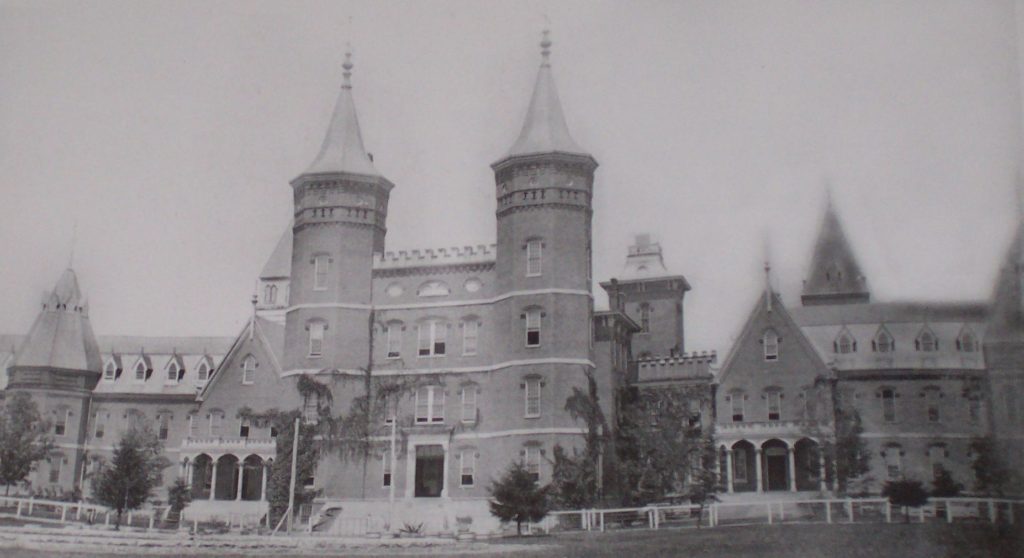 We can all probably agree that the term “lunatic asylum” has a much nastier connotation than “mental hospital,” which likely comes from the real horror stories surrounding many of the former around the turn of the 20th century that conducted experimental testing. Such was the case of the Central Kentucky Lunatic Asylum located just outside Louisville.

Overcrowded, people were just thrown in on top of each other, and reports of experimental therapies included electric shock, ice baths, lobotomies, and other serious mistreatments of patients. The so-called Sauerkraut Cave was located beneath the facility, earning its name because it was used to store cabbage, among many other items. The cave linked to the Louisville underground, a series of caves and tunnels used by bootleggers and smugglers from the Civil War to Prohibition to move items from river ports to the downtown area unseen. It’s known that many patients from the asylum tried to escape through the cave, but without proper gear, in the pitch-black darkness, many would drown or die from hypothermia. There’s no way of knowing how many people were buried on the grounds altogether, but there is a belief that many “problems” were disposed of in that cave, including but not limited to women who became pregnant while in the facility’s care. As such, the area boasts many ghost stories and has been a lightning rod for paranormal investigators. Today you are free to explore the cave that is now a part of E.P. “Tom” Sawyer State Park, but it’s probably better to go with a guide.

In 2003, the American Institute of Parapsychology named Savannah, Georgia, America’s most haunted city. Proud of this distinction, the city offers numerous graveyard and ghost tours that can be tiered to entertain all ages. For those of drinking age, one of the best places to frequent is the Moon River brewery, located downtown, right on the river. One of the oldest buildings in town, it was originally a high-end hotel and one of the larger local structures to survive the Civil War. Not all the guests were as fortunate, however, as the building saw more than its share of heated skirmishes and deaths, including an unwelcomed Yankee who was beaten by a mob.

Today, virtually every paranormal researcher and paranormal-themed TV show has paid a visit to Moon River brewery, investigating claims of people getting pushed, punched, and slapped by no one, and bottles mysteriously flying through the air. According to legend, the top floor remains unrenovated because years ago, as construction began, the foreman’s wife was violently pushed down the stairs by an unseen force. He quit on the spot. Downstairs, at least, you can grab some good Southern food and get a buzz going before you head out to hunt for your own spirits.

For more weird, check out weird and wonderful Japan, and romantic destinations.

How to Avoid Hangovers