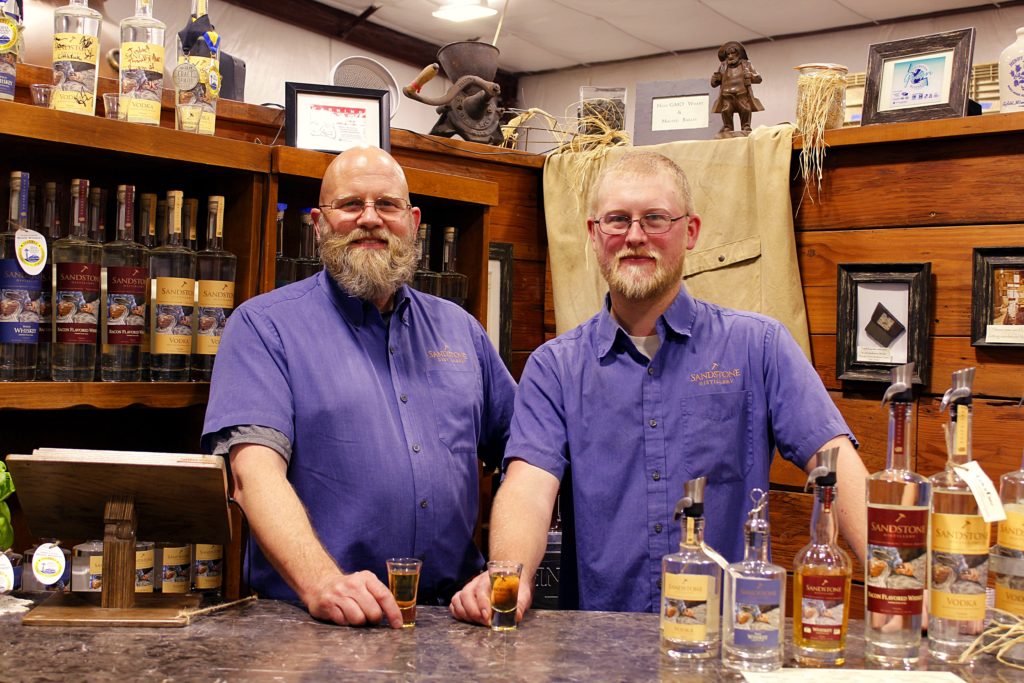 Quick survey: For your job, would you rather be tied to a desk all day, doing some physical labor, or sitting around with your buddies “sampling” the liquor you just made in your own still? OK, maybe we can’t all do it, but you can see the appeal, which is why craft breweries and wineries have gained such popularity over the last few decades. Now, it’s craft distilleries making spirits that are all the rage, and nowhere are they more popular than Washington state.

John Bourdon, the founder of the award-winning Sandstone Distillery in Tenino, Washington, about an hour south of Seattle, gives much of the credit for the in-state popularity of craft spirits to Don Poffenroth and Kent Fleischmann, the co-founders of Dry Fly Distilling in Spokane.

“The guys at Dry Fly Distilling approached legislature and worked to create the craft distillery law,” Bourdon says. “We’ve always had the ability to distill spirits, but the license fees were excessive. The new law set the license fees to $100 a year, with the caveat being 50 percent of the ingredients you used had to come from Washington. The idea was to make distilling an agricultural activity, which it’s always been anyway. And this helped us support our farmers and orchards, so it was a good idea, and it just took off and started this whole distillery craze in Washington.” 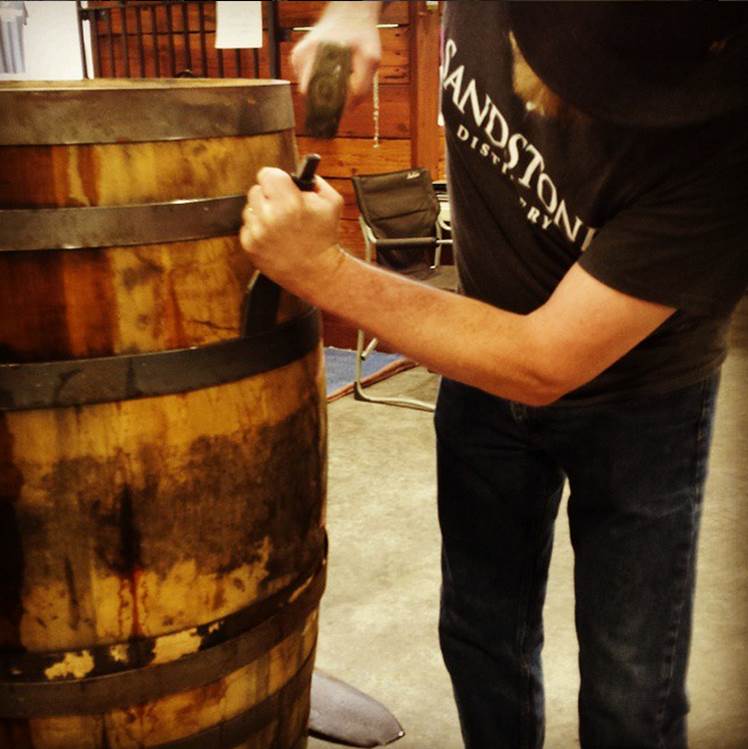 Before June 2008 there were no craft distilleries in the state. Today, no state has more than Washington’s 128. Thanks to the law change, the booze is literally pouring from every corner of the state.

“The 50 percent law is pretty easy for us because we’re all about the apples,” says Suzy Pingree, who partners with her husband, Hawk, and Rich Anderson to operate San Juan Island Distillery, located on a small island between Seattle and Vancouver, British Columbia. San Juan Island Distillery started off making small-batch ciders and jumped at the opportunity to add spirits to its repertoire, now offering 12 types of gin, along with several liqueurs and flavored brandies, including an apple brandy that took home a gold medal and was named best in class by the American Craft Spirits Association in 2014.

“We focus on what Washington is best at: beautiful climate, scenery, and local food,” says Pingree. “Our apples are so good, and our island is home to many varieties of delicious botanicals that we can forage and include in our spirits. We can find a delicious berry or nut or leaf and figure out a way to use it to make a spirit more interesting. Mass-produced spirits can’t do that.”

The beauty of craft spirits from the neophyte’s side is that anyone with drive, passion, and ingenuity can get involved. The Pingrees are retired college professors who say that before becoming distillers, they had no industry knowledge other than just enjoying good apple brandy with a cigar after dinner, while Bourdon was getting burned out running his trucking company.

“I was sitting watching television after work with a snifter of scotch in my hand, and I looked and wondered how they made it,” Bourdon says. “And I wondered if I could make it. So I shut off the TV and Googled ‘how to make alcohol,’ and that’s how it all started 12 years ago. I went online and bought a 5-gallon still, and that turned into a series of failures, but the failures turned into a hobby. We would do a different batch every weekend and try to make something else, and got it to where it wasn’t half bad.

One night while drinking scotch and watching television, Bourdon became curious about how such spirits were made and went online to learn more. Eventually he ended up buying a 5-gallon still and each weekend would make up a new batch, improving as he went.

“Just when I was getting it to the point where it wasn’t half bad anymore, I got a registered letter from the Department of the Treasury,” he says. “That was a real eye-opener. I didn’t think I was doing anything wrong. You can make beer at home and you can make wine at home, right? Well, I had bought a still online, and the feds raided the place I bought the still from, and that’s how they got my name, number, address, and all that.

“The letter said, ‘Dear Mr. Bourdon, we understand you have this still.’ Yeah, so? ‘We sincerely hope you aren’t distilling alcohol with this still, because the penalty for distilling alcohol without a federal permit is $500,000.’ That made me poop a little bit. Then I read further, and it said, oh by the way, it’s also a felony punishable by five years in prison. I was like, you’ve got to be kidding! That doesn’t fall off your record like a parking ticket. That stays with you forever. If you try to do anything else in life, you’re going to have an issue with a felony like that on your record.

“So we started down the merry road of legitimacy immediately. I replied to that letter pretty quick and sent them my application number. They never followed up because we were in the process of getting legal and have been paying taxes. And we could have been making perfume for all they knew. So now when people ask how long I’ve been a distiller, I tell I’ve been doing it for 10 years … and legal for two.”

“There was a learning curve. If you didn’t know how to make coffee, at some point you’d realize running the water through ground beans is better than just running them through whole beans. And then you’d realize there’s a difference between fresh-ground beans and stuff that got ground up and sat around in a can for however long. So after a while, we got pretty good with our spirits.” 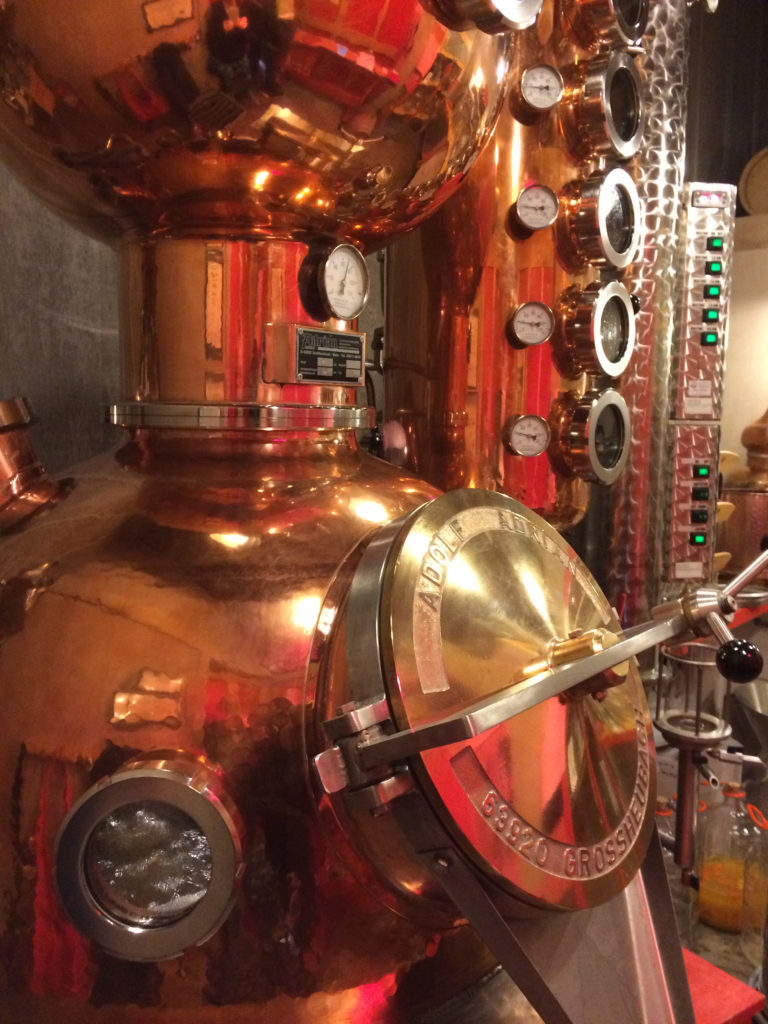 The true craft spirits that are produced indubitably take on the character of the people creating them. Sandstone is a laid-back, fun-loving operation, where Bourdon and his son, Justin, split all duties, from master distiller to floor sweeper. And the operation has become much more efficient and refined from its early days, operating with repurposed soup kettles from a 1970s Navy ship and fabricating with various metals in order to create whatever it is they need. On San Juan Island, where brandy—usually considered one of the more sophisticated spirits—is the star, they imported a top-of-the-line Adolf Adrian still from Germany.

From a business perspective, it’s substantially cheaper to bring in mass-processed alcohol from the Midwest than it is to distill your own base from scratch. But adding a few flavors and a cute label to someone else’s alcohol isn’t what the true artisan distillers of Washington are all about. And that, to no one’s surprise, is what we consumers appreciate most.

“You can market ‘Grandma’s Homemade Cookies,’” says Bourdon, “but when you go in the back and see a bunch of Chips Ahoy! packages, with people slapping icing on them and repackaging them … it may taste good, but I’m just saying it’s not the same as true craft.

“We’re on a farm with well water, and the Pacific Northwest has the best drinking water in the world. There’s no substitute for that because the quality of your spirit depends on the quality of your ingredients. Whiskey is made with grain, brandy from some type of grapes, and vodka you can make out of anything: grain, fruit, corn, potatoes, peaches, Ding Dongs, Twinkies, or doughnuts. As long as you can ferment the sugar into an alcohol and distill that alcohol to 190 proof, you’ve got vodka. But how good it is goes back to the quality of your ingredients, as well as the people involved in the process.

“Gin is vodka flavored with juniper, but then there are so many different flavors and recipes that make them different. A lot of people make gin with mass-produced, grain-neutral spirits because it’s so much cheaper, so I say hats off to the people who make their own vodka, and who do it well enough to make their own gin.”

San Juan Island Distillery is one such place that makes its own vodka, and it’s no coincidence that it is considered one of the best around.

“We do a four-cycle run in the still consisting of heads, hearts, and tails,” Pingree explains, referring to the stages/temperatures of the run when certain chemicals boil off and different types of alcohols are then collected. The distiller’s skill at recognoizing a stage shift leads to better quality spirits. “Heads are nasty and discarded. Hearts are eau de vie [colorless fruit brandy], destined for an oak barrel to become apple brandy. Tails have a lot of good alcohol but some off flavors, so we throw them back in with the cider to grab more of the alcohol. The eau de vie from runs one and two becomes apple brandy; the alcohol from runs three and four goes to our gins. The tails from the fourth run in the cycle are stored until we get 30 gallons together, then we redistill them to get the rest of the alcohol, and we use that to make gin also.”

Once understood, the process of making a spirit isn’t really all that difficult, to the point where the bigger challenge appears to be having the courage to try new things, the conviction to do them properly, and the passion to persevere in the face of adversity.

“I feel privileged to do what we do and to be doing it here in Washington,” Bourdon says. “Believe me, you can buy a barrel of bourbon way cheaper than what it’s going to cost you to produce it yourself. Some people see this as a business and are content to take someone else’s work and slap their label on it, but for us, I love getting dirty on the farm, augering grain, getting it home, and then seeing what we can produce from it. It’s a challenge for sure, but you know what they say about wanting something done right.” 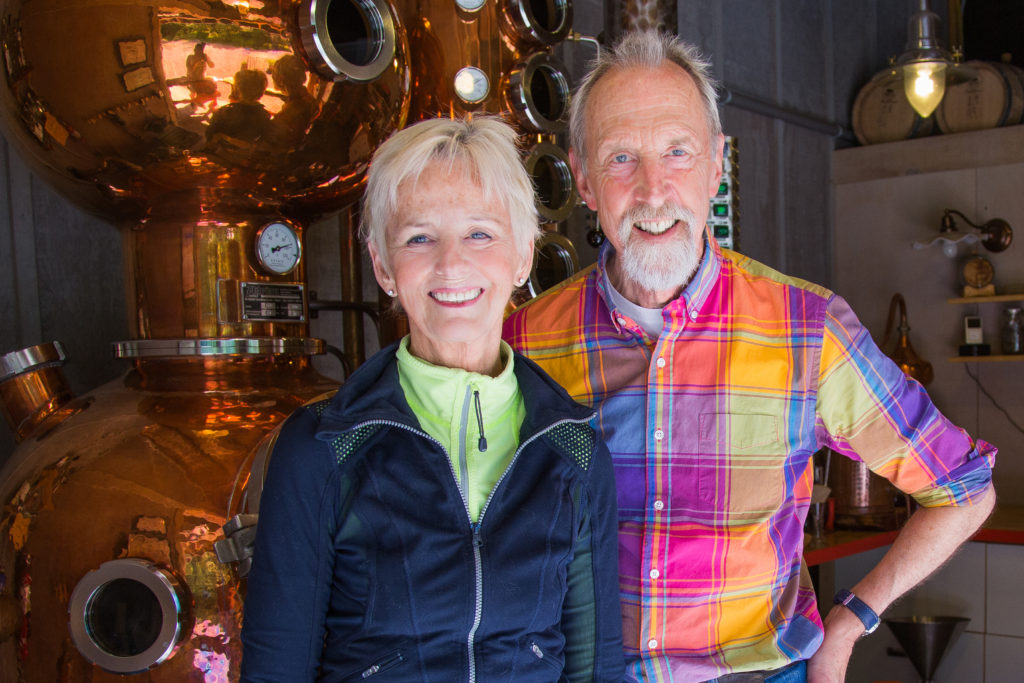 “On San Juan Island, there was a small hard cider works going, and seven years ago, after my husband and I retired from being college professors, we bought into it so we could add a distillery. We didn’t know anything about distilling spirits. We just loved Washington apples and drinking apple brandy after dinner with a good cigar.

“Two months after we started, we got a bronze medal from the American Distilling Institute for our apple eau de vie. That was stunning for us. Then we got a series of silvers for our gins, and finally a gold and ‘best in class’ for our apple brandy in 2014. It was almost like getting tenure!”

C&L: What is your favorite mixed drink? Pingree: Negroni made with Cynar and Carpano Antica.

What is your favorite spirit/food pairing? Grilled salmon and blackberry sauce with Pommeau (a barrel-aged spirit made with hard cider and apple eau de vie).

Do you have any tips for visiting the Pacific Northwest? Fly to Sea-Tac [Seattle-Tacoma International Airport] and get on Kenmore Air to San Juan Island. It’s so beautiful.

What is your favorite cigar/spirit pairing? After dinner, with my sons-in-law, my favorite is a Davidoff Grand Cru No. 5. I only smoke those with my gold medal, best-in-class apple brandy.

Check out a cigar company based out of Washington.