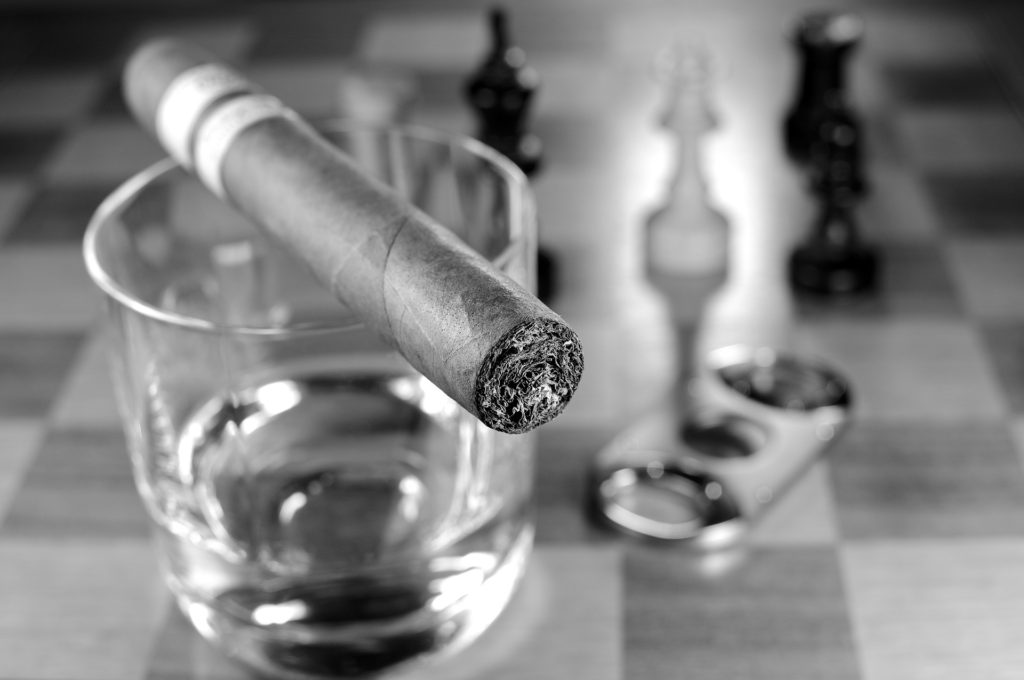 You wouldn’t think the matter of how we cut and light a cigar should cause controversy, but no matter what advice these pages dispense, some readers are going to disagree. That’s allowed! After all, our cigars are personal to us.

Most fine, handmade cigars have to be cut before they can be lit because of a closed cap affixed to the cigar’s head. (Incidentally, here is a good way to remember which end is the head and which end is the foot: You hold cigars’ feet to the fire and stick the head of the cigar inside your head.) My favorite two mechanisms for cutting a cigar are probably the two most common—the guillotine and the punch—and either works swimmingly, if the cigar and cutter are right for each other.

When you guillotine the head of a conventional, blunt-end cigar, shave away just the minimal amount needed to ensure an easy draw. Because the cap secures the wrapper leaf to the cigar—preventing the wrapper from coming unwound—you don’t want to take off the entire cap. You’ll wind up with a mess instead of a pleasant smoke. It can be a bit tricky for a beginner, freehand, to take off just the perfect amount. [photo A]

Some manufacturers offer guillotine cutters with a built-in backstop to prevent you from chopping off too much. Those cutters aren’t necessarily the right choice when you need to cut a pointy-ended cigar, so traditional, open guillotines are still more commonplace. There is an easy way to achieve a perfect, backstopped cut with a traditional guillotine. I call it the Nelson Tabletop Method. (I know; some will object that this isn’t anything new and that I’ve no right to commandeer naming of the procedure. But no one told me about it—I discovered it on my own—and now that I’m immortalizing it in print, I can name it if I want to. Write your own article, and call it whatever you wish. I won’t mind.)

Place the guillotine flat on a tabletop, open the blades wide, and position the cigar to receive the cut. Gently close the blades around the cigar until they are in snug contact with the cigar on both sides. [photo B]

Then, smartly clap the blades shut. Here, it is essential that you not pussyfoot. Don’t gradually squeeze the cigar in any slow, excruciating crush operation. You want to lop off the cap with a firm, authoritative snap, as quick as lightning. This will take off perhaps an eighth of an inch of the cigar and leave enough cap intact to do its job. [photo C]

I love a punch cut, too, although punches can be tricky. If your cigar is a tad dry, you can crack the leaf with even a small amount of pressure. But in general, if your cigar is properly moist, you just gently press the punch into the head, rotating in a back-and-forth twist, until the cutter enters the cigar. (Be patient.) [photo D]

Then gently pull the plug of tobacco out. [photo E]

If the plug doesn’t want to come out despite your having penetrated generously, you can usually pry the plug up and out of the cigar with your fingernail. Take note: If the tobacco plug is hanging by a thread, don’t pull on that. It’s like pulling the thread on a sweater: bad news. Instead, clip the tendril off clean with your teeth, and you’re good to go.

Sometimes, if your cigar is gargantuan and your punch is small, you’ll want to make multiple cuts: two punches side by side, three in a triangle shape, or even four in a clover shape. [photo F]

One last bit of advice about cutting a cap: Learn to do the operation with your teeth. This takes practice, but there will be times you’ll find it helpful (and cool) to know this trick. Clipping with the teeth is an old-fashioned way of making the cut—and it’s a much more delicate proposition than the gross bite-and-spit move you might have seen in spaghetti western movies. I carefully scratch into the cap with one of my lower teeth and clip into it with an upper, then rotate the cigar and repeat, turning and clipping until I have a cut that stands up well to any punch you can buy. [photo G]

I’ve even known one cigar smoker who thought it gauche to rely on any device for punching a cap when the teeth could do just as well. (OK, it was I; but I’m not strident that way anymore.)

As for lighting, I know that blasting the foot of the cigar with a torch is all the rage, and I do keep torches around, for when I’m in a hurry, or driving a car, or out in the wind. But when I have time, in a quiet, calm place, I baby my smokes with a weak, orange flame. I do not like to “toast” the foot. That last millimeter of tobacco out on the end is just as redolent of tasty oils as the rest of the cigar, and I want to taste it all. So I put a weak flame under the foot and never let that flame touch the cigar. [photo H]

I just want to warm the tobacco for a few seconds, to wake it up, to liberate some of those oils so that they will readily ignite. Once you have some gasses oozing from the leaf, give it a couple of puffs and the foot will blaze up without flame of lighter or match ever contacting the cigar. [photo I]

Now you’re cooking. Rotate the cigar and blaze it up again. Do this a few times, and then turn the foot of the cigar facing you and gently blow on it to see if you have a nice cherry coal glowing evenly. Touch up if needed. I’ve gotten to where I can light even a big ring gauge cigar this way using a single 3-inch wood match, never needing to brutalize the leaf with any torch. I enjoy the mastery of the thing, and I like getting those early flavors that might otherwise be toasted away. Gently warming and blazing up a cigar gives you immediate, intimate knowledge of that cigar’s true taste. It’s information. It’s data. It’s your cigar talking to you. All that remains is to relax and enjoy the discourse. [photo J]

Read part 1 of our how-to cigars series and find out about how to select a fine cigar, and part 3 of our series: How to travel with cigars, also check out how to review cigars! And if you’re looking for some cigars to try, meet Archetype!

How to Survive a Music Festival