City Revival: The Resurgence of Pittsburgh 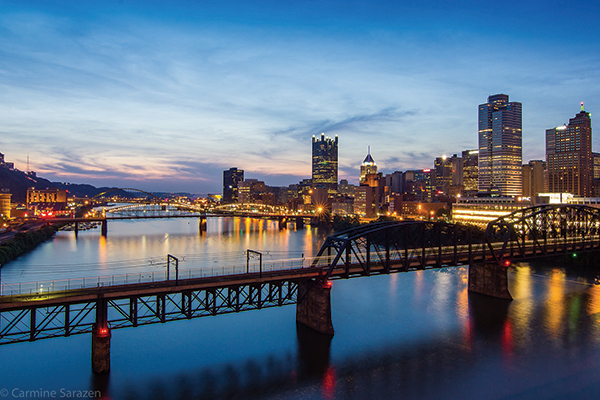 New York City, Miami, Chicago—those are all cities you expect to find in any list ranking the best cities for tourism. When the results came in for this year’s Readers’ Choice Awards and Pittsburgh came in as cigar enthusiasts’ second-favorite U.S. city for travel, it made us turn all of our attention to the Steel City. What makes the ‘Burgh so appealing to travelers? Maybe it’s the city’s resilience in the face of economic hardship brought on by the collapse of the steel industry. Where other cities that relied on steel struggled to find identities when the industry nearly disappeared, Pittsburgh has embraced change and used it to make itself over. From the rise of the culture and art scene to the booming tech scene, Pittsburgh’s got it going on.

Today, Pittsburgh is still undergoing a cultural revival by embracing the digital age. From convincing companies like Uber and Google to set up offices in the city to becoming a backdrop for major films like The Avengers, The Dark Knight Rises, and Concussion, Pittsburgh has shaken off its steel industry past and become the city of cool. It’s authentic and hip, being called by some the Hollywood of the East. While mentioning the city’s name may bring up mental images of abandoned steel refineries and rust, it’s time you got to know the new ‘Burgh. From the best places to smoke to the city’s big whiskey scene, there’s no surprise cigar enthusiasts love Pittsburgh.

TRAVEL TIPS
BEST TIME TO VISIT
For travelers, high season is generally April through October. Spring is a popular time to visit the city due to the pleasant weather, whereas fall is popular for the changing leaves.

GETTING AROUND
The city can be hard to navigate and a bit confusing for tourists, but the city has great public transit, referred to by locals as the PAT (Port Authority). The city also has great bike trails for those who really want to explore the city.

BEER SCENE
Pittsburgh is known for its beer scene, and one of the best places to drink is Church Brew Works in Lawrenceville. It’s a brewery made in a converted church, providing a very unusual setting to knock back a few pints. More on the city’s beer scene on page 76 of Cigars & Leisure’s 2016 Spring issue.

NIGHTLIFE
South Side’s many bars and restaurants make it one of the best areas in Pittsburgh to experience the nightlife. If theater and shows are more your cup of tea, visit the Cultural District.

Heading to Pittsburgh? Visit Pittsburgh (visitpittsburgh.com) is a great source of information, covering a range of travel topics, accommodations, events, restaurants, and more.