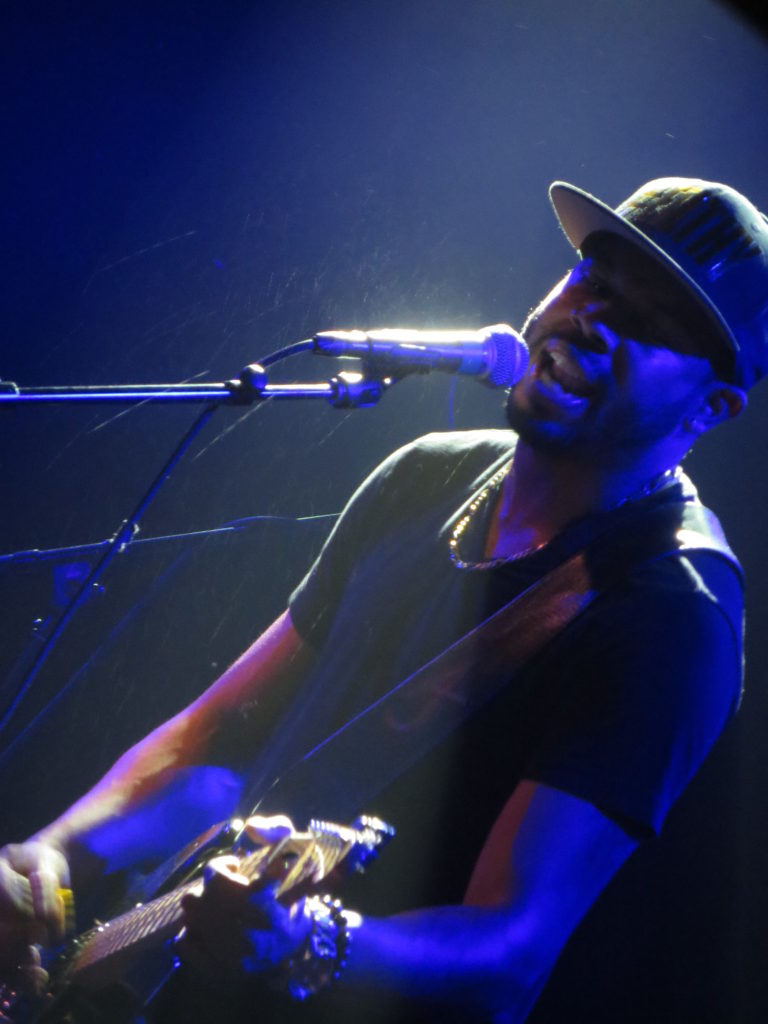 Ayron Jones may be on the verge of superstardom. But one thing’s for certain—he’s already a rock star. The energy in the Crocodile, one of Seattle’s most popular music venues, where Ayron Jones and the Way recently played, was the equivalent of Green Day or U2 playing the largest stadium. Every single person wanted to be there. No one was dragged along unwillingly or thought, “Well … I guess I’ll check this out.” There were music fans of all ages and from all walks of life gathering to witness who many are calling, “this generation’s Jimi Hendrix,” play his sold-out show. And living up to that hype and rocking the crowd is what Ayron Jones does best. His music transcends genres and borders, and he brings everyone together to share in what he calls an “out-of-this-world experience.” He couldn’t be more right.

Watching him play the guitar live, one would assume he had spent thousands of grueling hours with a guitar master to get to the level he’s at now. Wrong. Jones is completely self-taught, starting at the age of 13.

“Guitar is my obsession,” Jones says. “I don’t know whether it’s even an instrument to me anymore. It’s like speaking another language. I can fully express myself through this vessel.” 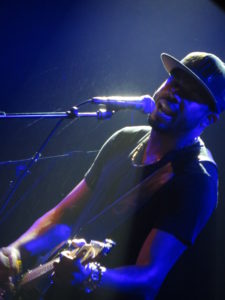 If you had to describe his music, the label would be “uncategorized.” It’s a mix of modern blues and modern rock, classic blues and classic rock, and even a little bit of pop (though he doesn’t admit that as readily). It’s not hard to understand how he mixes all these genres once he starts talking about his influences, which include Stevie Ray Vaughan, Michael Jackson, Mozart, Dr. Dre, Nirvana, and, of course, Seattle’s own James Marshall Hendrix.

“I’m blending all those worlds together,” Jones says.

Jones is already a celebrity in Seattle, which is evident beyond the crowds that go wild for him at his gigs. His career took off in 2012 when his band was discovered by Seattle rapper Sir Mix-a-Lot in a dive bar.

Jones recorded in Sir Mix-a-Lot’s studio and only a year later released his first studio album, Dream. What followed were rave reviews, national recognition, and appearances at festivals such as South by Southwest, Sasquatch, and Bumbershoot.

Jones describes working with Mix-a-Lot as a defining moment in his career, the moment he was introduced into the majors. Being a rock star, however, was not what Jones had in mind for his life. He wanted to be a police officer so he could help his community and have a normal life with a normal house and a normal routine.

“I had so much more to give to the world than to be constrained to any label or job,” Jones says. “I think I was afraid of truly taking in what it is to live your dream. It was this wild, burning fire within me to play music, and it was hard for me for a while to realize that was OK. My boyhood dreams were nothing like this, and it didn’t start to take shape until I realized that I had a gift and something special to work with.” 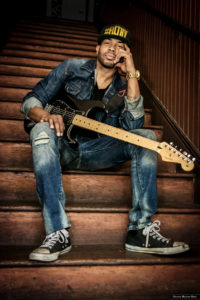 Growing up in Seattle, Jones says that, statistically, he should be on the streets or a “thug.” Describing himself as orphaned, but not an orphan, Jones was raised by his aunt and barely ever saw his parents.

“When I did see my mom, she was in and out,” he says. “She was strung out, on drugs or drinking. But luckily someone had a lot of love for me and loved me just perfectly enough to see the darkness but also see the light.”

This is Jones’ message to the world, and why he listens to Drake to get himself pumped up for his live shows—it’s “started from the bottom, now we’re here.” It’s why Jones can almost always be seen with his hat with #filthy emblazed across it. “It’s my connection to all the kids that come from my town,” he explains.

A large contributor to Jones staying down to earth and always remembering where he came from is meditation, which he says is the key to staying calm.

“I recognize now that I’m received by some people as one of the best guitar players of my generation,” Jones says. “And it’s like, what does that really mean? There’s so much power that goes along with that, and I’m really just preparing to spread the message that I want to spread.”

That message comes across clearly in his new single, “Love Is the Answer,” off Jones’ upcoming album, Audio Paint Job, releasing this summer.

“If you truly believe in the story that we’re created, then you’re just loved,” says Jones. “You know what I’m saying? You are loved. To express love is to get love. You listen to the song and I say, ‘We’re all to blame, the universe our name.’ You have to change your perspective and see what you want to do, and if it’s to experience love, then love your enemy as you love yourself.”

If you’re wondering whether anything bothers the laid-back Jones, it’s the lack of good ol’ rock ‘n’ roll. 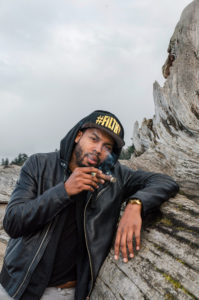 “I don’t know what happened to our generation,” he says. “Somewhere along the line we forgot how to play just goddamn American rock ‘n’ roll. I don’t know why we stopped. We got the turntables, we got the electronics, we got all this stuff, but what happened to just straight-up, in-your-face, unapologetic American rock ‘n’ roll? I don’t know. I just don’t know.”
Despite his rapid rise to stardom, Jones is staying calm and cool as he prepares to release his new album. There may even be a national tour on the horizon, though Jones isn’t going to release any details yet.

But it isn’t touring nationally that give him the jitters; it’s playing at his own hometown shows.

“For some reason, local shows are the hardest, because you’re playing for people that have probably seen you a billion times before and who have been following you for years,” Jones explains.

Listening to his album is an amazing experience in itself, but it’s seeing him live where you can really hear the raw passion in his voice and watch his fingers fly over the fret board of his guitar. Even Jones agrees that the live show is where it’s at: “My producers are telling me the album is going to get a lot of nominations and awards, but it’s the live show that has people like, ‘Alright, well we got it now,’ because we go hard, man.”

Jones talks a lot about his gifts and sharing them with the world, and all his fans at the sold-out show are thankful for his generosity.

“At one point, you were an abandoned 4-year-old, and now you’re playing your own original material on stages in front of people,” Jones says. “That’s a gift, you know. That’s a gift.” 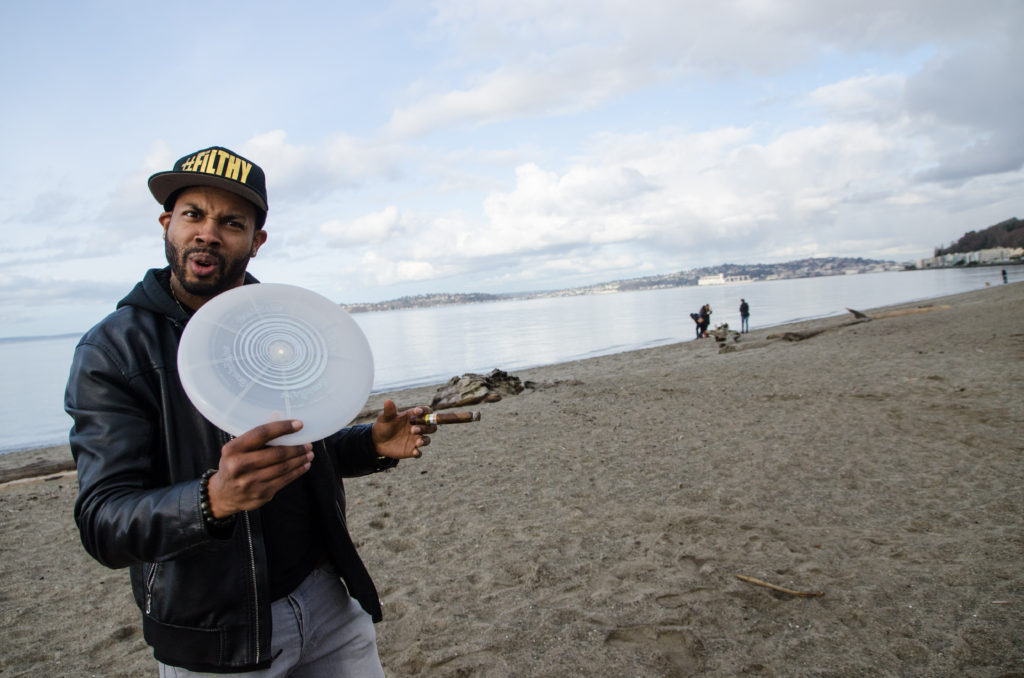 Check out our unedited interview here.