Spring is the perfect time to prepare your calendar (and your wallet) for all the summer music tours, and 2019 is shaping up to be an exciting year. We’ve got veteran rockers returning to the stage (Rolling Stones), as well as brand-new rockers (Greta Van Fleet), others saying goodbye (Bob Seger), and another (Elton John) who decided his farewell tour should be three years long.

We’ve compiled a list of the tours we’re most excited for this year, and no, you won’t see any Lady Gaga or Justin Timberlake on here, though if you’re a fan, they’re both touring as well. If we get to all these shows this summer, we’ll be dropping some serious cash, but that’s fine by us because live music is one of the last communal experiences we have, much like cigar smoking. So, instead of heading to the cinemas this year or staying in, let’s get out there and experience some live music together and create memories that will last a lifetime.

Note: Tours are in order of those ending soonest, as in, get your tickets ASAP. 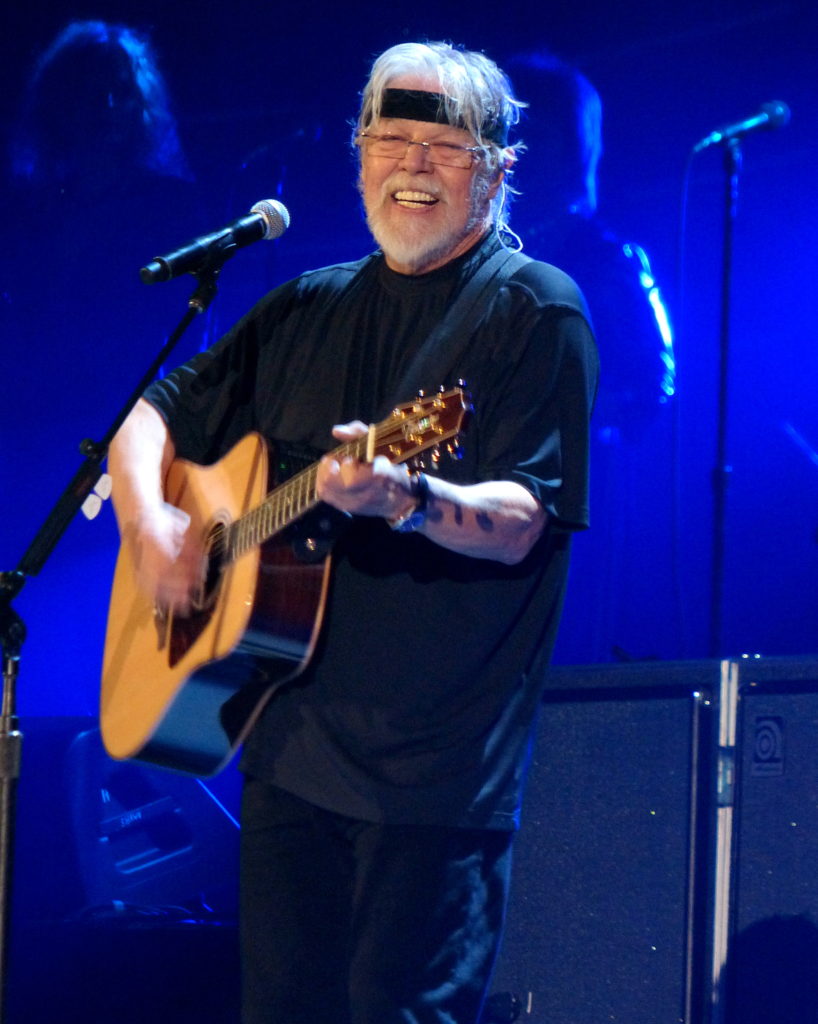 Tour dates: Now–May 2
Why we’re excited: We’re half excited, half sad about this tour because after more than five decades, Bob Seger is touring his last. Seger, now 73, has stated in interviews that while this will be the end of his touring, it’s possible that he’ll continue releasing new music, so there is a silver lining. Last fall, Seger had to postpone many of his dates when he ruptured a disc in his back and needed emergency spinal surgery, but he’s back and ready for that “Old Time Rock and Roll” one last time.
Fun fact: Seger played a whopping 260 shows in 1975.

Tour dates: Now–June 18
Why we’re excited: Despite a plethora of drama in January, including Lindsey Buckingham being kicked out of the band in the middle of the tour and then Buckingham subsequently suing his now former bandmates, this should still be a good show. After all, it’s freaking Fleetwood Mac. Buckingham has been replaced by Tom Petty and the Heartbreakers’ guitarist Mike Campbell and Crowded House’s Neil Finn, with Finn taking on vocal duties as well.
Fun Fact: According to Rolling Stone, Buckingham’s guitar was restrung every 20 minutes during the recording of “Never Going Back Again” in order to achieve the best possible sound for the picking parts. 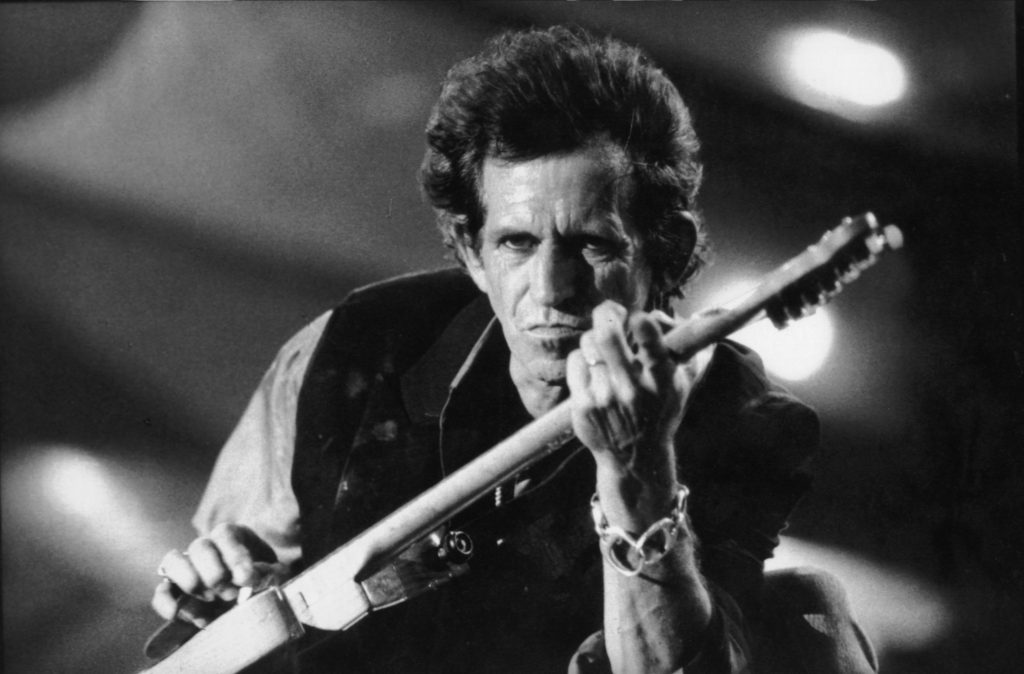 Tour dates: Now–June 25
Why we’re excited: The last time Rolling Stones toured was in 2015, and now the band, who has been together for 57 years, is hitting the road again. Bonus: They’re even working on a new album. It’s impressive that it’s still basically the core group of guys who have been touring together since 1962, and even many of their backing musicians have been with them since the ’80s and ’90s. That is truly something special and definitely not to be missed.
Fun Fact: Mick Jagger and Keith Richards first met when they were 5 years old. 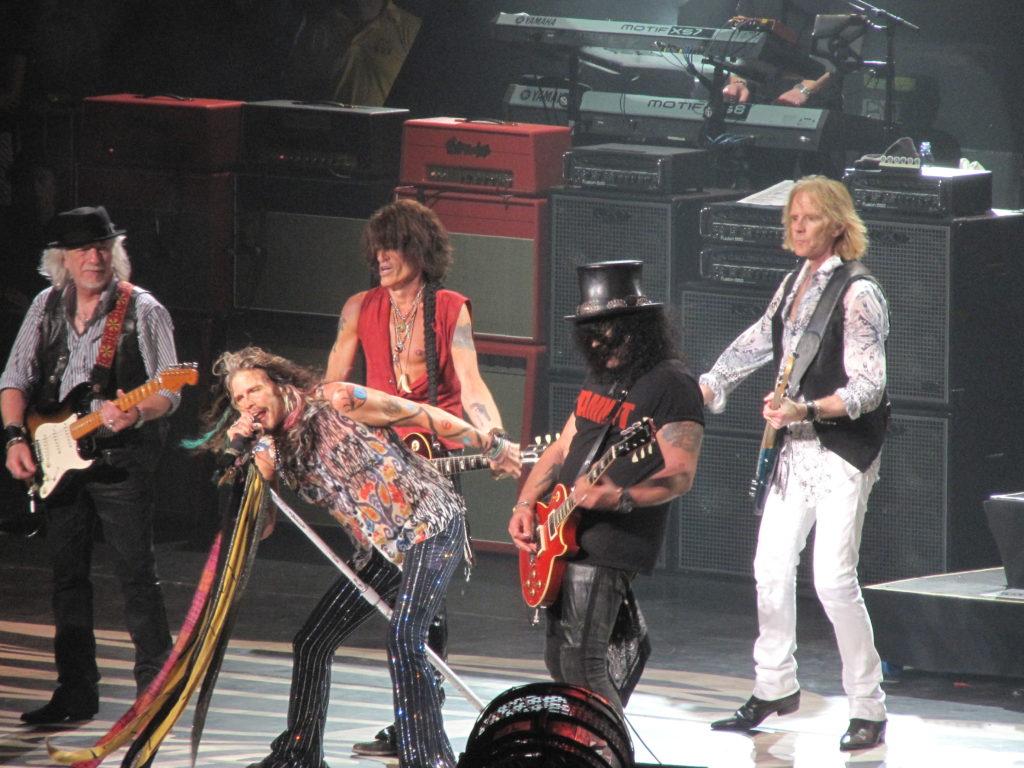 Tour dates: Now–July 9
Why we’re excited: OK, it’s not technically a tour because they’ll only be in one place, but for a few months, Aerosmith will have a Las Vegas residency at the new Park MGM resort. For those going to the IPCPR (International Premium Cigar and Pipe Retailer) convention in late June, this will be the perfect time to see this show. However, if you can’t make their Vegas shows this year, Joe Perry told the Atlantic City Weekly that we can expect a 2020 nationwide tour in celebration of their 50th anniversary.
Fun Fact: Before settling on “Aerosmith,” the band toyed with the names “Spike Jones” and “Jack Daniels.”

Tour dates: May 7–July 14
Why we’re excited: Taking the music world by storm, these early 20s rockers carry the sound of guys three times their age and were recently nominated for three Grammy Awards. Whether you love their music or think they’re just ripping off Led Zepplin, one thing can’t be denied: They are extremely talented both musically and vocally, and they put on a hell of a live show.
Fun Fact: Three of the four members are brothers.

Beach Boys: Now and Then Tour 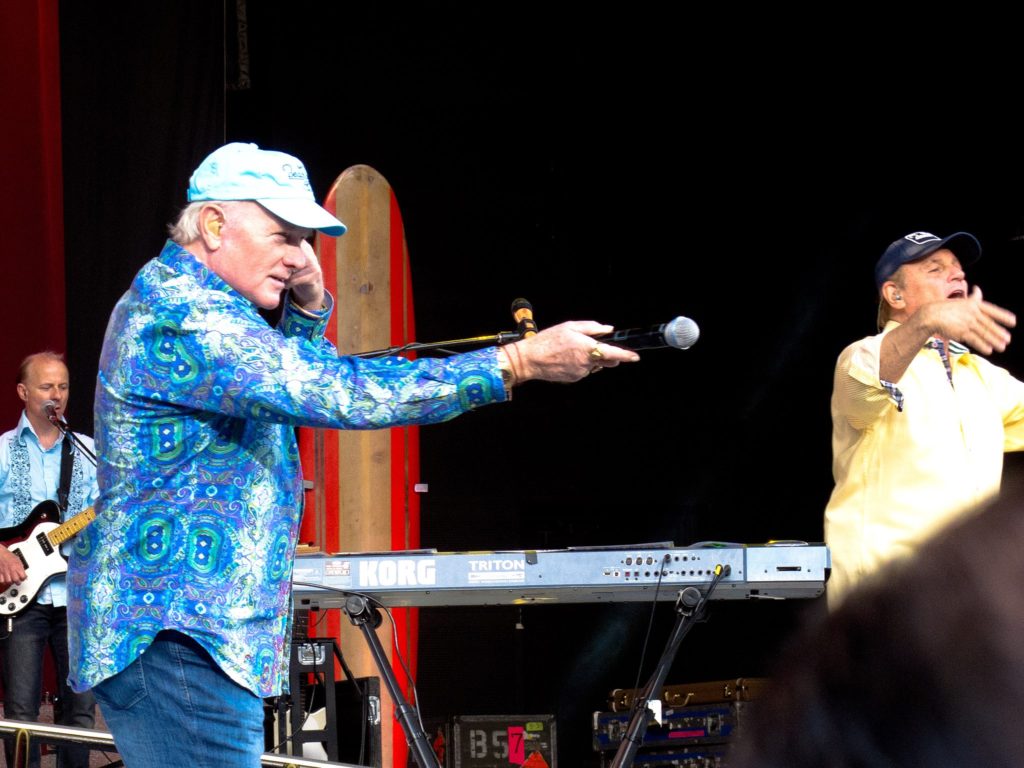 Tour dates: Now–Aug. 2
Why we’re excited: Of the original Beach Boys, only Mike Love is still touring; however, Bruce Johnston, who has been in the band since 1965, is part of this tour as well. No matter who plays the songs, hearing “Good Vibrations,” “Surfin’ Safari,” “Kokomo,” or any one of their 10,000 hits still takes you back to those warm beach nights and simpler times.
Fun Fact: Speaking of the original Beach Boys, only Dennis Wilson knew how to surf. 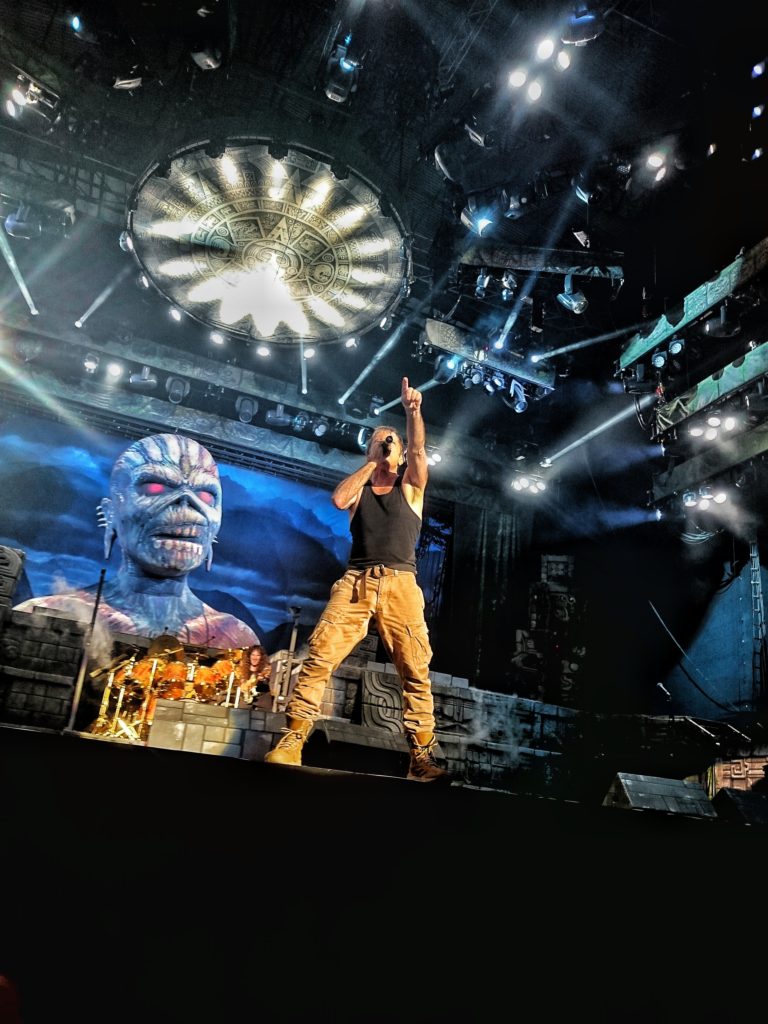 Tour dates: Now–Sept. 30
Why we’re excited: Iron Maiden, the legendary frontrunner of heavy metal, has, incredibly, been a band since 1975. This tour is inspired by their mobile game, which finds their mascot, Eddie, exploring different worlds created by Iron Maiden. Singer Bruce Dickinson elaborates: “It is not that easy designing different worlds on stage, and we put a huge amount of work into this to make it work, and the end result we feel is our most spectacular and certainly the most complex show to date.” Not to be missed? Definitely.
Fun Fact: Iron Maiden has its own beer, video games, and comic books.

Tour dates: Now–Nov. 10
Why we’re excited: This tour may seem a little out of place on this list, but come on, admit that you’ve listened to Michael Buble before … and loved it. The popular crooner, whose sound is reminiscent of the stylings of Frank Sinatra, took a few years off to be with his family while his son fought a battle with liver cancer. Thankfully, his son is on the mend, and Buble is “… going back to what I was made to do. I’m going to come back to a world that needs love and romance and laughter more than it has in a long time.”
Fun Fact: His first job was as a commercial salmon fisherman at the young age of 14.

Kiss: End of the Road Tour

Tour dates: Now–Dec. 3
Why we’re excited: This seems to be a sad theme of 2019: Many bands are putting away their guitars and packing up their amps for good. Granted, Kiss also had a farewell tour 19 years ago, but this time it feels more permanent. “This will be the ultimate celebration for those who’ve seen us and a last chance for those who haven’t,” Kiss said in a statement. “Kiss Army, we’re saying goodbye on our final tour with our biggest show yet, and we’ll go out the same way we came in … unapologetic and unstoppable.”
Fun Fact: Gene Simmons’ tongue is 7 inches long, 2 inches longer than what’s considered normal. 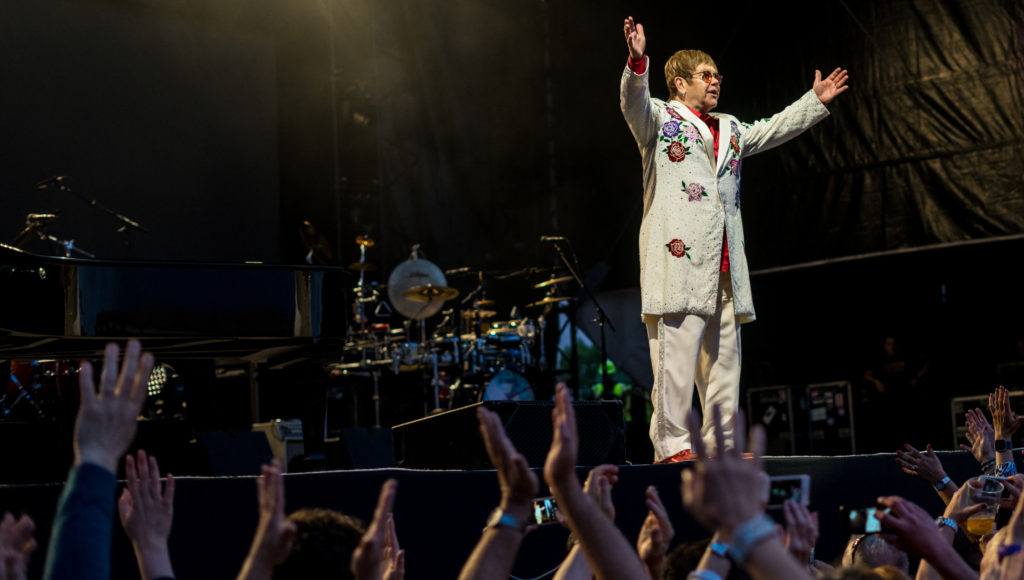 Tour dates: Now–2021
Why we’re excited: What a strange concept to draw a final tour out for three years, with over 300 shows across five continents. But what a fitting and epic ending it is for such a prolific performer who’s been wowing audiences for over 50 years. Not only is it a concert, but it’s also a stage production taking “fans on a musical and highly visual journey spanning a 50-year career of hits like no one has ever seen before.”
Fun Fact: Elton John’s real name is Reginald Kenneth Dwight.