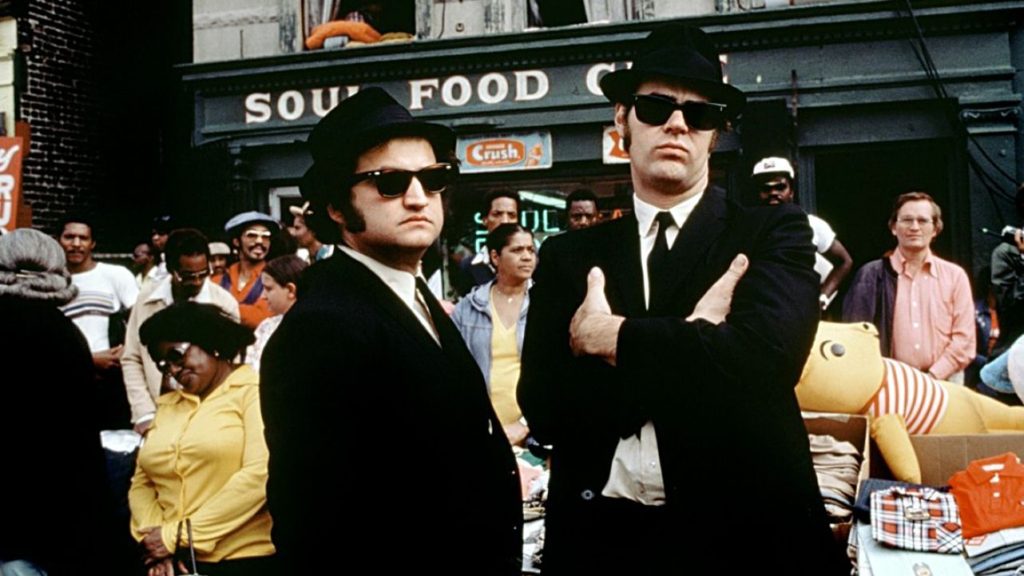 Don’t you wish you had a job where you could sit around for six hours pondering what actually constitutes a “fake band”? You have bands completely made up for movies and TV that lip-synced other people’s music, bands that were put together with real musicians that actually performed on camera, and others where the fake bands, like the Blues Brothers and the Monkees, actually became popular and went out and made albums and toured.

For our purposes today, we are ranking the best individual songs made popular by fake bands. The songs are based on their actual merit in the real world. So while I acknowledge Spinal Tap is the greatest fake band of all time, they honestly don’t have a song that holds up to those on this list. For me, the hardest part was defining anything from Purple Rain. In the movie, Prince is simply known as “the Kid,” but he’s playing with the Revolution, his real band. These are the issues that keep me up at night! And what about Otis Day and the Knights, who did a great version of “Shout” in Animal House but who weren’t really the ones who made the song famous? Check out the list below to see how things shook out, and if you don’t like the reasoning, start your own magazine!

10. “Degenerated” by the Lone Rangers
Airheads

Airheads is the star-studded cult comedy where three Lone Rangers (yes, that gets pointed out in the movie), in hopes of getting their song played on the radio, stumble into taking hostages as they seize a radio station. With Brendan Fraser as the lead singer, backed by Adam Sandler and Steve Buscemi, we spend the entire movie waiting to hear the song, so thankfully it was good. The song itself was actually originally a popular offering from punk band Reagan Youth. So while it never had a big mainstream following, it does score high in terms of street cred.

If you haven’t seen Scott Pilgrim vs. the World, it’s a little hard to explain. Born from the Scott Pilgrim series of graphic novels by Bryan Lee O’Malley, it’s about a floundering garage band made up of a bunch of slack-ass musicians who need to win a battle of the bands so their dreams of stardom can come true. They end up battling not just the bands but also ex-boyfriends of Scott Pilgrim’s crush using video game techniques. Yeah, it’s weird, but I digress. Sex Bob-Omb is the name of the band, and without a good name for their song, it quickly gets dubbed “We Are Sex Bob-Omb” by Kim the drummer (over “Launchpad McQuack”). The song itself is actually a catchy little punk number written by Beck and includes performances from the actors themselves. And if we’ve learned anything from punk music, it’s that a song doesn’t have to be complicated to be good.

After Michael J. Fox traveled back to 1955 to simultaneously rip off and inspire Chuck Berry, he moved on to be wannabe rocker Joe Rasnick, who teamed with his sister, Patti, to form the Barbusters in the mostly forgettable 1987 film Light of Day. What’s not forgettable, however, is the movie’s title track that reached No. 33 on the charts. The rocking tune was written by Bruce Springsteen and performed in the movie by Joan Jett, who was making her acting debut. The Boss used the song to close shows for years, and Jett still plays it on tour to this day. Interestingly, when the movie script was given to Springsteen, who was consulting on the musical aspects of the film, its working title was “Born in the USA,” which, obviously, later became the name of one of his biggest hits. And now you know.

The 1983 movie Eddie and the Cruisers was about a New Jersey bar band that puts out a hit album but then disappears for 20 years with everyone thinking the lead singer is dead. The music the movie studio had prepared for the film was garbage, but a string of fortuitous meetings eventually led the producers to John Cafferty and the Beaver Brown Band, who were legit and basically became the muse for the movie band. John Cafferty rewrote “On the Dark Side” in the band’s own, Springsteen-like sound, which fell on deaf ears when the movie flopped at the box office. Soon after, though, when the movie appeared on HBO, it became a cult favorite, and the lip-synced video spawned huge sales for the song. “On the Dark Side” peaked at No. 7 on Billboard and sold more than 4 million albums. You may not remember the movie, but everyone knows the tune (even if you think Springsteen is singing it).

The Wonders, or the “Oneders,” depending on what part of the film we are talking about, hit it big with “That Thing You Do.” The movie of the same name, written by, directed by, and starring Tom Hanks, is a story of the ultimate one-hit wonder (see what he did there?) in 1964, whose catchy tune rockets up the charts as the band falls apart. In reality, the song was written by Fountains of Wayne bassist Adam Schlesinger as part of a contest, peaked at No. 41 on Billboard, and was nominated for Best Original Song at both the Academy Awards and Golden Globes. It’s actually been covered numerous times, including by the Knack and ’N Sync. And as Tom Hanks says in the movie, “It’s snappy.” Just so damn snappy!

5. “I’m a Believer” by the Monkees
The Monkees

It started out as a TV show about some bumbling musicians with dreams of being the Beatles. The show ended in 1968, but the four musicians/actors who became the Monkees kept recording until 1971 and, after a 15-year hiatus, did live appearances until Davy Jones died in 2012. They had several hits that charted but none better than “I’m a Believer,” which was written by Neil Diamond. It went gold in two days, topped the Billboard charts for seven weeks in 1966–67, and is one of only 41 all-time singles to sell more than 10 million physical copies. Say what you will about this fake band, but at their peak in 1967, their music outsold the Beatles and Rolling Stones—combined. A new generation was introduced to this great song when Smash Mouth covered it for the Shrek soundtrack in 2001. That version went to No. 25 on Billboard.

4. “We All Die Young” by Steel Dragon
Rock Star

At one time or another, everyone has probably had the Rock Star fantasy, where your favorite band invites you to be their new lead singer. In this 2001 film, Mark Wahlberg gets the chance to lead Steel Dragon (breaking up with Jennifer Aniston to do so), and we get a soundtrack loaded with huge songs. “Stand Up” (written by Sammy Hagar) takes center stage in the movie, but “We All Die Young” is the best start-to-finish song to come from the fake rock band, whose real-life actors included Ozzy guitarist Zakk Wylde, Foreigner/Dio bassist Jeff Pilson, and drummer Jason Bonham (best known for being the son of Led Zeppelin’s John Bonham). The original song was recorded by Steelheart in 1996, with co-writer and lead singer Michael Matijevic doing the singing honors for the movie as Wahlberg lipped it. The song never got the recognition it deserved on the charts, but that doesn’t mean it didn’t kick ass.

Even though John Belushi is from blues-loving Chicago, it was actually Canadian comedic partner Dan Aykroyd who turned him onto the genre. The origins of the Blues Brothers can be traced back to a 1976 Saturday Night Live (SNL) skit where the two were doing what would eventually be the act dressed like giant killer bees. One thing led to another, and they ended up putting together a who’s-who band from the blues world and took styles from legendary musicians to create the personas of “Joliet” Jake and Elwood Blues. In character, they made their true debut as a band as SNL’s musical guest April 22, 1978, performing “Hey Bartender.” The movie hit in 1980, and the rest is history. “Sweet Home Chicago” itself is legendary, first recorded by Robert Johnson in 1936 and famously covered by such names as Buddy Guy, Earl Hooker, Fleetwood Mac, Eric Clapton, Stevie Ray Vaughan, and Barack Obama. But the Blues Brothers’ version is probably the most popular and certainly the best-known to today’s audience.

Zeppelin meets Sabbath with a splash of Soundgarden. It sounds like blasphemy, but when you learn who was involved in the making of this song, it’s not the craziest thing ever said. The four actors that formed Stillwater, the fake band in Almost Famous (two of whom were actual musicians), all went to “rock school” taught by professor Peter Frampton as they portrayed a ’70s band that got a second chance. While the actors worked admirably on the music for the screen, the real sounds for the song came from Heart’s Ann Wilson, Nancy Wilson, and drummer Ben Smith; Pearl Jam’s Mike McCready; Aerosmith/Def Leppard writer/producer Marti Frederiksen; and of course Frampton himself. Just a killer tune.

Deciding on how to classify Purple Rain was tough. The Revolution was a real band. But in the movie, it wasn’t Prince, per se; the character was just “the Kid.” So we’re letting it slide because without the movie, the album wouldn’t have had near the success. (Theoretically.) This 1984 flick launched Prince as a global superstar as this quasi-biographical depiction of his life grossed $80 million worldwide, and the album landed songs all over the charts, collectively taking home the Academy Award for Best Original Song Score. The soundtrack is loaded with hits, but none rock it better than “Let’s Go Crazy,” which starts off with a church organ and spoken dialogue before pounding drums and squealing guitars join the mix. More than 30 years later, this song remains a powerhouse anthem.

While you’re at it, check out our list of 10 coolest cars you can own from movies, and 6 craziest rockers of all time.